Walz extends Minnesota's 'Stay at Home' order to May 4

The statewide mandate began on March 27 and was originally set to expire this Friday, April 10 at 5 p.m. 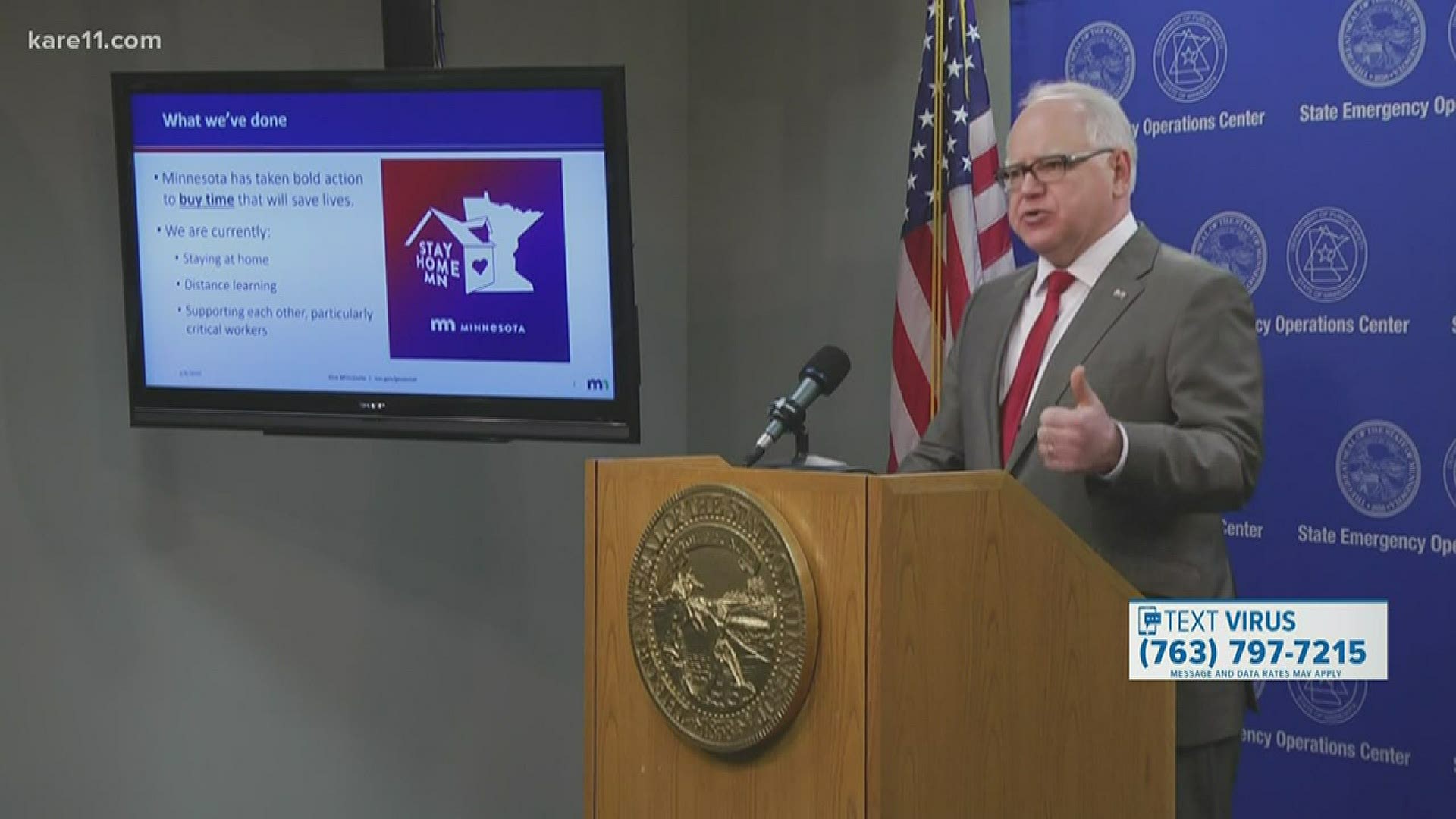 ST PAUL, Minn. — Minnesota Gov. Tim Walz announced Wednesday that he is extending the state's "Stay at Home" order until May 4.

The order, which began on March 27 at 11:59 p.m., was originally scheduled to end this Friday, April 10. The bar and restaurant closures have also been extended to May 4.

The extension is in line with federal guidance urging social distance through the end of April. Walz said he's been told by federal officials they are expecting to produce millions of antibody tests, which could detect whether someone has had COVID-19 already, by the beginning of May. He said state officials in Minnesota do not believe that will be nearly enough, which is why he wants Minnesota to be able to test on its own.

"I want to save every life we can," Walz said.

You can read the full "Stay at Home" order here.

Walz said data that compares states shows how social distancing has helped flatten the curve in Minnesota more than any other state. However, he pointed out that Michigan and Louisiana saw similar success and then spiked quickly, so "we cannot rest easy."

"This thing can explode overnight if you don’t take the proper precautions," Walz said."

There will be updates to the "Stay at Home" order that are not fully decided yet, but the governor said the order has "a mechanism" that will allow for changes to be made in the coming days.

The governor said he is looking into getting people back to work if they can do so safely. Some landscaping workers have already been added into the exempt food and agriculture category.

"I direct the Commissioners of Health, Employment and Economic Development, and Labor and Industry to begin planning on how to allow certain non-Critical Sector workers to return to work when it is safe to do so," Walz said in the official order. "Such a plan must include guidelines and requirements for appropriate social distancing, hygiene, and public health best practices."

"It's not going to be a typical summer," Walz said in reference to a question regarding summer activities like boating. The governor said he is looking at ways that people can carry out the activities they want to do while doing them safely.

Walz says the order "bought some extra time" that is being used to increase hospital capacity, buy ventilators and masks, expand testing and give researchers like those at the Mayo Clinic time to develop treatments.

"It is still entirely possible, and I think with the work I'm asking you to do, is for us to avoid the overflowing of the hospitals thus putting our neighbors at risk," he said. "And the quicker we do that with the work that's being done on testing and some of the therapeutics, the quicker that we're ready once we try and resume normal life."

Walz said the next wave of COVID-19 will more than likely be in the fall.

Walz maintains that the social distancing Minnesota is practicing is expected to push out the peak of COVID-19 cases in the state to early July. He said both the Minnesota Department of Health (MDH) and the hospitals and health care systems in the state have asked him to extend the order.

The governor ended his address by asking Minnesotans for patience. We are moving in the right direction, he said, and this executive order can "give us a structure to start moving as many people safely back into the workforce, and then to be testing people to see who's immune."

"There is a way out of this," Walz said. "But ... do not get complacent, do not give up all the hard earned gains that you made. Do not allow ourselves to believe that this is over because we're seeing a point in time positive set of data. Because there are too many examples in real time within the last couple of weeks of other places thinking they were there, and it very quickly turned bad."

Minnesota Department of Health (MDH) Commissioner Jan Malcolm said Tuesday that though it appears the peak has been pushed out in Minnesota, we are still "on the early end of our curve."

“We’re likely to see much more rapid increases over the next few weeks here," Malcolm said.

Walz said that he is still "very nervous" about the lack of testing for COVID-19.

RELATED: Am I considered an essential worker under Minnesota's 'Stay at Home' order?

As religious holidays approach this month, Walz said state officials are looking at ways people can celebrate while adhering to social distancing.

"We simply want to keep the progress we're making going."

Walz also clarified that while the "Stay at Home" order considers faith workers essential, it does not exempt church gatherings.

RELATED: Drive-in churches an option for faithful who miss gathering

"I know that there is a sense of fellowship that goes with these," he acknowledged. He said they are looking for creative ways to continue some religious gatherings, including using outdoor spaces and keeping distance among people.

"I would reiterate to people again gathering in large numbers in the church, we simply don’t want that happening," he said.

Malcolm said one way they are tracking the COVID-19 curve is to look at the rate of doubling. She said they are happy to note that Minnesota is seeing a slower rate of doubling than they anticipated.

Since the week of March 18, when they started implementing broader community mitigation, health officials have seen the doubling rate slow to once every eight days, and have maintained that rate.

"That's good news," Malcolm said. "We need to keep this up so we can reduce the chance that our health care system will be overwhelmed by a surge in cases."