Families say the reluctance of some to receive the vaccine is taking a toll by delaying in-person visits. 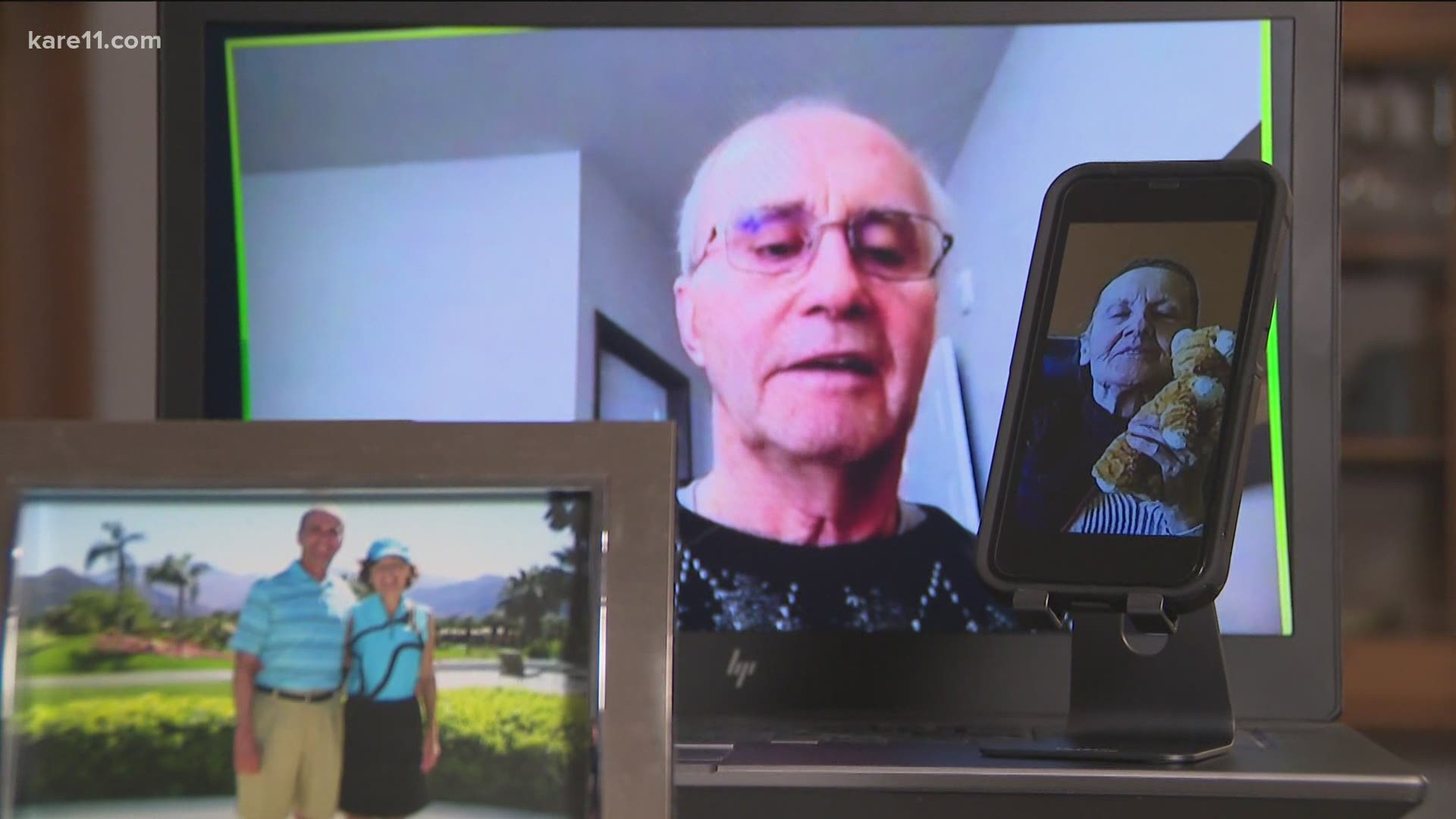 MINNEAPOLIS — As the COVID vaccine rollout continues to reach more of the population, some families and long-term care facilities are urging caregivers to also receive the vaccine.

According to the Centers for Disease Control and Prevention, 37.5% of long-term care staff, nationwide, had received the vaccine by early February. The latest data from the Minnesota Department of Health shows that number jumps significantly within the state: a Feb. 26 MDH report shows nearly 56% had received their first vaccine dose, and 46% had received their second.

Despite that incremental increase, families say the reluctance of some to receive the vaccine is taking a toll by delaying in-person visits.

“I’m very frustrated because I don’t understand it. I mean, you just look at it, if you don’t have the vaccine, people die,” said Tom Stanton, who wasn’t able to visit his wife Donna at her Annandale care facility for months due to what he described as COVID infections among staff.

And then there’s the background of how this pandemic has played out: with statistics showing more than one-third of the COVID-related deaths have come from within long-term care settings.

“If there’s any place where staff should be vaccinated, it’s in nursing homes and long-term care. We know staff in many cases were the vectors of infections and infectious outbreaks in nursing homes,” said Dr. Joseph Gaugler, Professor and Robert L. Kane Endowed Chair in Long-Term Care and Aging at the University of Minnesota’s School of Public Health.

The reasons for the reluctance

Health care leaders say the reasons for the vaccine hesitation are varied. But experts also note the overall issue may be a simple question of “when,” not “if.”

“We have a lot of folks that are in the ‘vaccine wait.’ So we’ve had some facilities that have had as few as 30 percent of the staff get vaccinated. But it’s not a ‘vaccine no,’ it’s a ‘vaccine wait,’” said Patti Cullen, President and CEO of Care Providers of Minnesota which represents nearly 1,000 care providers, from independent living facilities to what would be considered nursing home care.

Cullen said one reason for the hesitation relates to the age of some of the caregiving workforce.

Among the other significant issues: a history of vaccine abuse and experimentation against communities of color, the high turnover among long-term care staff, and the sheer amount of disinformation on social media.

“We have a lot of young females working in our settings, and there was a lot of social media hype about infertility. So they were all nervous that they wouldn’t be able to have kids,” Cullen said, noting that health experts continue to emphasize there is no connection between the vaccines and any fertility concerns.

Another big factor in the vaccine delay: the vaccine remains under emergency use authorization – or EUA – so neither the federal nor state governments mandate the shot. The Equal Employment Opportunity Commission did stipulate that employers can require – with some exceptions – employees receive the vaccine. But few employers, at this point, do – especially within the competitive long-term care industry.

But perhaps the biggest challenge, Cullen believes, relates to the timing of when this group was expected to receive the vaccine.

“It happened quickly. We were the first group being vaccinated, and there wasn’t a lot of information out there. That information had started coming out and trickling out since the first clinics,” she said, adding that compared to other vaccine programs – the acceptance rate appears to be telling a positive story.

“We were all hopeful that everybody would get it, but if you look at the vaccine rate in comparison to influenza rates, pneumococcal rates, all the other ones – we’re doing pretty good in Minnesota for a brand new vaccine,” she said, noting that long-term care staff have also survived, shown up and sacrificed throughout a difficult year.

“They did everything they could to protect those they care for,” she said.

Meantime, those working within Minnesota long-term care facilities believe the strong vaccine acceptance in our state may be due to the outreach efforts by the centers themselves.

“Rather than being critical of staff, it’s a matter of helping people in a loving way understand the importance,” said Shirley Barnes, President and CEO of Crest View Senior Communities.

Barnes noted her organization – with facilities in Blaine and Columbia Heights – has developed a vaccine advocate program to provide the reassurance staff may need to receive the vaccine.

“We have vaccine advocates who have been ambassadors to other staff, to co-workers, to help them understand we’re not going to grow a third ear if we get the vaccine,” she said.

That program has specifically addressed social media rumors with direct information from medical professionals. Ambassadors also represent the diversity of the staff and include those who have already received the vaccine.

And all of that outreach has worked, Barnes said, noting a dramatic uptick in participation from first to second vaccine clinics.

“Everyone will respond differently, and I will never fault a staff person for making the personal decision that they do because they show up every day, and they’re here. And they’re dedicated. And if there is anything that this pandemic has shown me, this is a staff that is persistent, that is resilient, that will make it,” Barnes said.

Tom and Donna Stanton, both 80 years old, married shortly after graduating from Sauk Centre High School in 1958. They worked together as manufacturer’s representatives, raised their son together and enjoyed travel, golfing and dancing… a lot of dancing.

“We did everything together, you know,” Tom said on a frigid February afternoon, adding that Donna was his “best friend, companion.”

Tom also noted that Donna was “very thoughtful,” volunteered at a hospital for “many, many years,” and was always “a very good listener.”

“I’m having a hard time with what’s happened to her and why,” Tom said about Donna’s dementia diagnosis in 2015.

Like many families, the Stantons have continued to connect with Donna over Zoom. But given the limitations of dementia, the family has struggled to truly “reach” Donna during the conversations.

“She understands, I think, but she just can’t communicate back. She can’t express any thoughts of her own. She can’t put the words together anymore,” Tom said after a recent Zoom family gathering featuring a babbling baby great-granddaughter, other grandchildren, the couple’s son, Dean, and Donna’s brother and sister-in-law.

Despite these challenges, Tom emphasized he’s grateful for the care his wife has received these last years at the Annandale Care Center, where Donna has lived since 2017. And he’s especially grateful the COVID quarantines finally lifted in early March, allowing him his first in-person visit with Donna since last fall.

“We’re both isolated. And we’re both lonely. We’re both longing to see each other in the closest way,” said Tom, who also described his ideal visit with his lifelong partner: “I would just hold her hand and talk about the old days… and see if that brings some of her memories back.”

When contacted about the vaccination rate at the Annandale facility, Deb Reitmeier, Administrator of Annandale Health & Community Services issued this statement:

“Annandale Care Center has encouraged all staff to take advantage of the vaccination clinics being offered on our campus. Staff have been provided with educational materials related to the vaccine as well as one-to-one conversations with those who were indecisive. Our staff have made endless sacrifices both professionally and personally in order to protect the well-being of our residents. They deserve to be recognized for these numerous sacrifices and not criticized for decisions related to their own personal healthcare choices.”