GOP majority passes legislation aimed at letting businesses reopen regardless of governor's orders, and create their own coronavirus safety plans 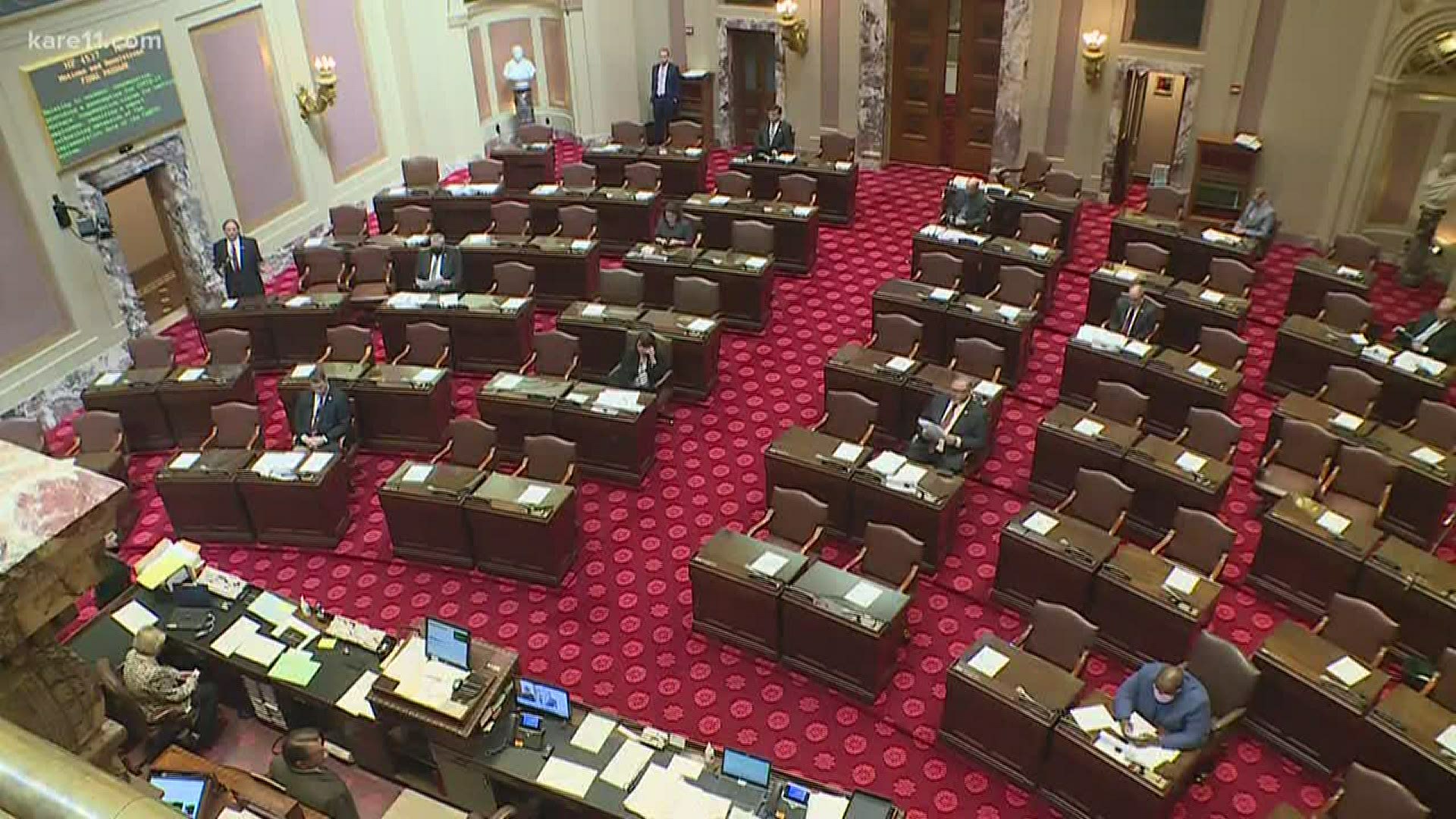 ST PAUL, Minn. — In what was a largely symbolic move the Minnesota Senate's Republican majority Monday pushed through a bill that would let all Minnesota businesses reopen in spite of any emergency orders from Gov. Tim Walz.

Business owners would be expected to comply with CDC and Minnesota Dept. of Health guidelines on social distancing, masks and other infection control practices.

Under the Senate's legislation, those plans wouldn't have to be reviewed by the government and the state would be barred from stripping business and professional licenses from those businesses.

The DFL-controlled House isn't expected to pass a similar bill, but the debate once again allowed Republicans in the legislature to assert a position that distinct from the governor's measured response.

"The ma and pa shops that are on main street in many of our small towns in my district and throughout Minnesota, they’ve been continuing to call and ask and say we know we can operate safely," Sen. Andrew Mathews, a Republican from Princeton, told colleagues.

"I had a business owner who reached out, contacted me, and he laid out what his safety plan would be, he had already come up with it."

Republicans expressed frustration with what they consider a double standard in the rules small businesses are living by during this phase of the coronavirus crisis, with big box stores selling some of the same items shuttered smaller stores also sell.

"I think if the governor’s using that science the small businesses, the small boxes, ought to be able to use that same science that has currently allowed for the big box stores," Sen. Mary Kiffmeyer, a Big Lake Republican asserted.

"There are people who want to do business, something other than going in the big box store. They find themselves, many Minnesotans, that they would feel much safer if they could go in a little box store!"

Many of those big box stores deemed themselves as essential because they sell groceries and other critical sanitation supplies.  Walz Administration officials have also pointed out the bigger stores have more space, making it easier for customers to self-enforce social distancing.

RELATED: Minnesota slower to 'reopen' than other states

Sen. Minority Leader Susan Kent of Woodbury said all Minnesotans are aware of the hardship that small business owners are enduring now, and Democrats understand that doing business curbside-only isn't sustainable in the long run.

"We are all in this together, and that is how we are going to find these solutions and strike this balance," Sen. Kent said.

"We all care deeply about the health of our economy, about these small businesses that make up the fabric of our communities."

But she also pointed out the story from South Korea that broke over the weekend, of a single young asymptomatic man infecting 43 others after visiting nightclubs that had opened.

Sen. Michelle Benson, who chairs the Health and Human Services Committee said that Republicans are growing frustrated because they can't see what Gov. Walz's game plan is, and don't know which modeling scenario he is following.

"Which scenario are we following in this model? Is the governor using it to make decisions? If so, I’d like to hear, which of the scenarios?"

She noted the MDH had recently added another scenario -- Scenario 5 -- predicting that continuing the Stay at Home order through the end of May would extend the peak until July 27 but actually result in higher ICU demand and a higher death toll over the course of the pandemic.

Democrat Jason Isaacson of Shoreview warned against turning the crisis into a purely political game to score points with voters in the fall.

"We are in a really tough situation that’s unpredictable and horrific, and we have a governor who I think has handled this as well as can be helped given all the crazy unknowns happening all the time."