The state is responding to calls for a release of the data they're using to help make decisions around coronavirus. 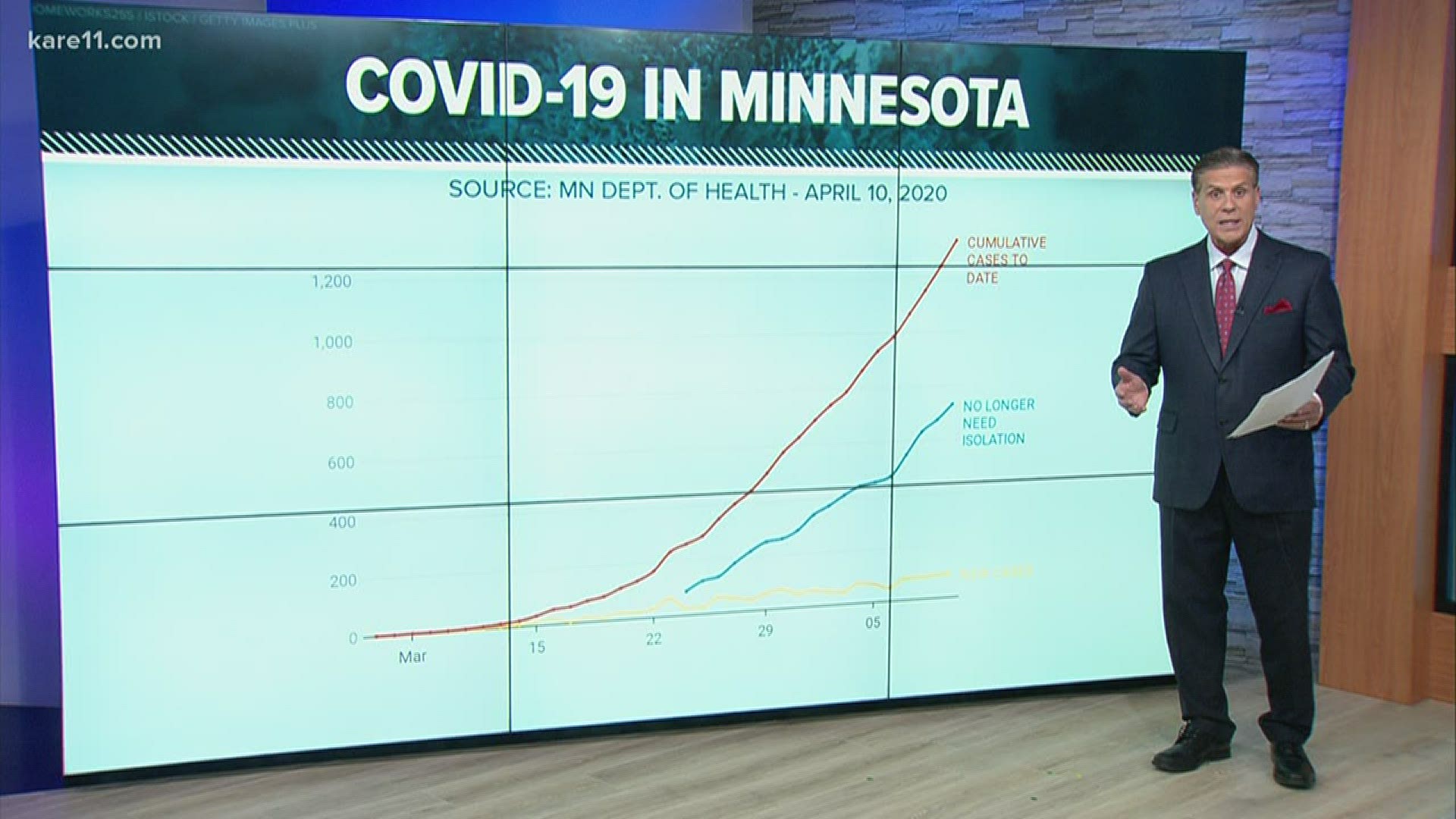 ST PAUL, Minn. — The Minnesota Department of Health (MDH) has released some of the modeling the state is utilizing to project the peak of COVID-19 infections in the state.

State Health Economist Stefan Gildemeister says the model structure used by the University of Minnesota and MDH has been used to forecast outcomes for other coronaviruses like SARS and MERS, and has been shown to work "fairly well."

State health officials have said repeatedly that modeling is not intended to show specific totals of cases or deaths, but to show directional changes and help decision makers figure out which variables are the most important. They said the model is one of a number of tools Gov. Tim Walz is using to make decisions like the "Stay at Home" order extension, including data from hospitals, advice from experts, and what they are learning from other states.

The model lays out several different scenarios with differing degrees of social distance. Under "Scenario 4," which assumes an extended "Stay at Home" order until May 8 - close to the governor's current extension of May 4 - ICU demand would be projected to peak at 2,700 in 16 weeks, on July 13. The projected mortality rate is 22,000.

“There’s more work to do for us to understand whether our peak ICU demand estimates are sufficiently robust," said Gildemeister.

The state has released several slides showing different scenarios and projections, along with frequently asked questions, on mn.gov/covid19/data/modeling.

The latest version of the model Minnesota is using assumes that the state has 2,200 ICU beds - a number hospitals and state emergency officials are working every day to increase. Right now the state believes it can have more than 2,700 ICU beds ready within 72 hours, but Gildemeister said their model assumes that some beds will be in use by non-COVID patients.

Malcolm said the model helps state officials figure out which variables are the most important to focus on.

"Really what it does is point us to what are the right next questions to ask," she said. "It doesn’t necessarily pop out the right answers." 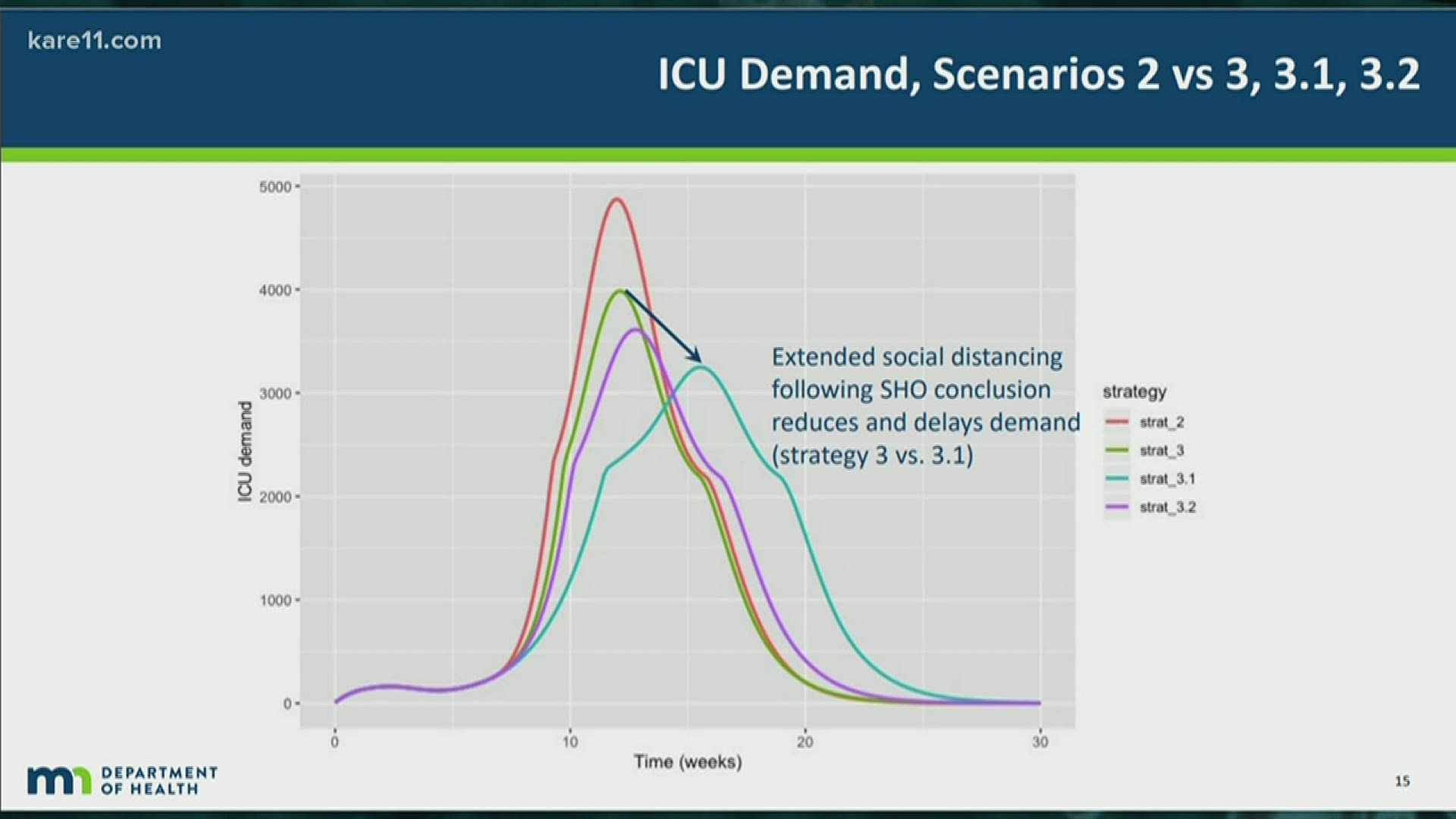 On Friday, Gildemeister said as they have gathered more data they have come to believe that COVID-19 is far more widespread in Minnesota than originally thought. He said they initially thought 12% of cases were detected by tests. He now believes that number is closer to 1%, which would suggest that Minnesota has 100 times the reported number of cases.

Health officials have said that some of those could be asymptomatic cases, and the majority are likely mild.

Gov. Tim Walz and MDH health officials have fielded numerous questions about the difference between their models and others. The University of Washington model, for example, shows a much lower death toll for Minnesota.

MDH Commissioner Jan Malcolm explained this by saying that Minnesota's model takes a "very long view" of the pandemic, while that model only looks four months out. Walz has said that infectious disease experts are predicting up to three waves of the virus over the next 12-18 months.

State officials also say that their model is the only one with Minnesota-specific data, and that the University of Washington model incorporates social distancing data from China, where restrictions have been much more stringent.

"We would love nothing more than to be shown for this to be very pessimistic, but we simply can’t afford to base all of our planning efforts and all of our attempts to help the state manage this epidemic as best it can … we can’t afford to not take into account the possibility that these ranges might be as broad as the model shows them to be," Malcolm said on Friday.

Malcolm and U of M researchers told reporters Friday that they are thinking ahead beyond the first wave of COVID-19, to the potential second and third.

“This is going to be with us in a really challenging way, in multiple ways, until there are treatments and until there is a vaccine, and that is just the hard reality," Malcolm said.

One key component of mitigation strategies plugged into the model is the idea of physical distancing at 50% - down from the 80% the "Stay at Home" order is attempting to achieve - for a longer period of time. Gildemeister said that could include an extended closure of bars and restaurants, though the governor has not said whether he will order this.

Another possible mitigation strategy is that high-risk populations, including those over 60 with underlying health conditions, would see a "longer term protective strategy minimizing social contact." Malcolm said that strategy is the subject of much discussion.

Gov. Tim Walz originally issued a "Stay at Home" order for March 27 through April 10, but this week he extended it to last until May 4.

In the new version of the executive order, Walz has added some categories like landscaping and lawn care, to the list of "critical sector" workers who are exempt. He also wrote in a provision that allows a state working group to begin figuring out protocols to get other businesses back to work if they can safely follow public health guidelines around hygiene and social distancing.