One-on-one: Tim Walz on COVID-19, restaurants, regrets, and governing during a pandemic

Walz sat down at a distance with KARE 11's Jana Shortal to reflect on leading Minnesota through a historic 2020 – and whether it will make him a one-term governor. 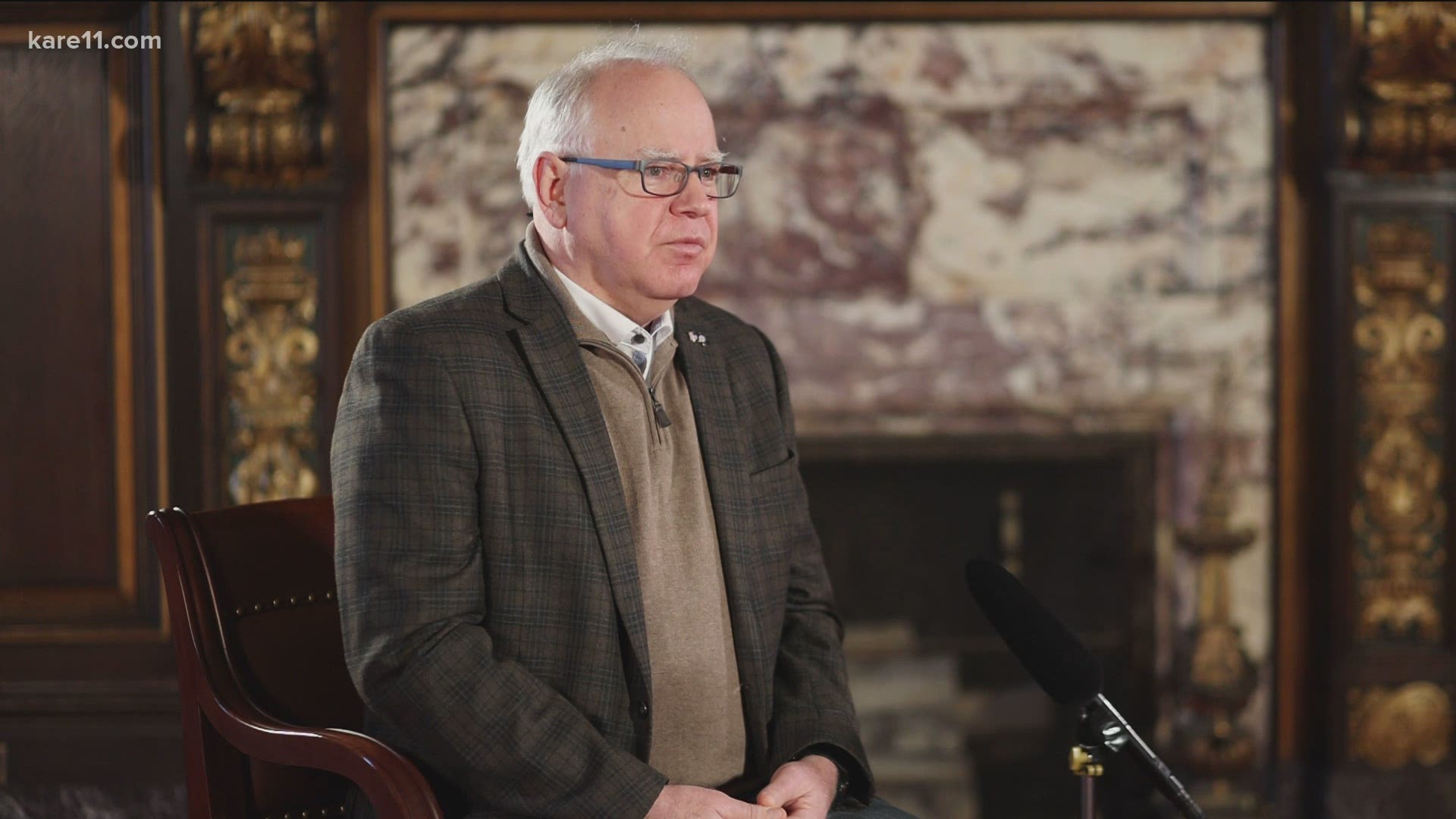 ST PAUL, Minn — For nine months, we have heard our state leaders tell us why they are making the choices they make when it comes to COVID-19 in this state.

On Monday, KARE 11's Jana Shortal sat down with Governor Tim Walz to talk about those decisions.

Governor Walz said it was a year ago when he first began to realize how big a foe COVID would be. And it would be two months after that that he would realize - he and 49 other governors would have to go at it their own ways.

Walz starting amassing teams at the state level to figure out how to test, how to get PPE. And at the same time, he watched the strategies on how to do that, and how to fight the virus, becoming partisan.

"I think we all need to be very honest about this, this took a very deliberate turn into political ideology," Walz said. "The mask became a symbol of politics. I will forever as long as I live wish that had never happened."

That the virus itself wasn't something to take drastic measures to fend off, or even simple measures to mitigate, like putting on a mask.

"You know these people are saying, 'You are just trying to have us wear the masks' or whatever," Walz said. "I said, 'I am. I want you to wear the masks so that you live.' And that's the day I said, 'So that you can live to the next election and vote against me.' Because that is not my priority. My priority is stopping the spread of this, and keeping you in that." 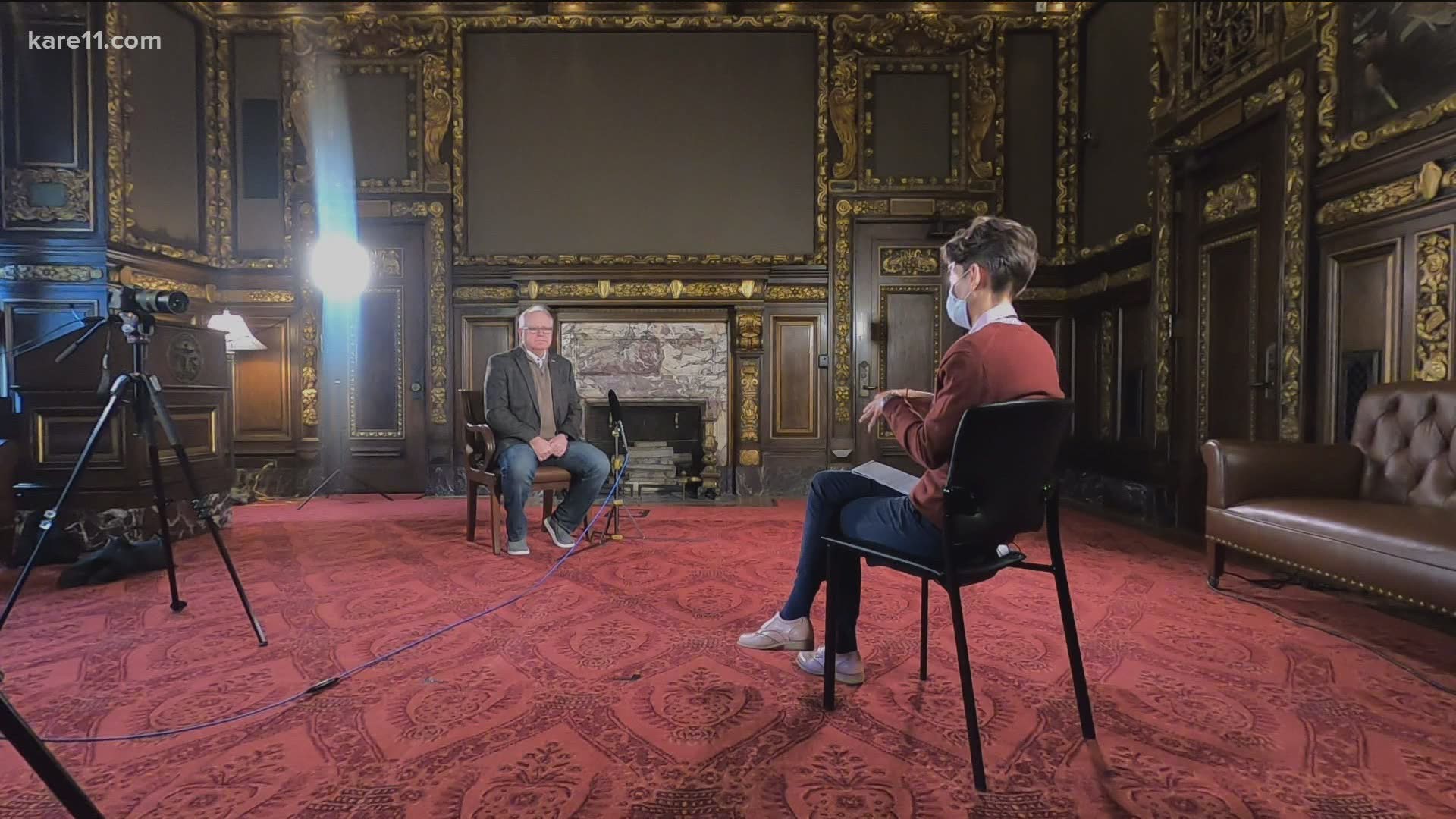 Does Walz give any thought to the possibility that he could be a one-term governor because of this crisis?

"That very well could be," he said. "And if that's the choice of Minnesotans as I have always said, I respect their right to do that. I have to do the things that need to be done, not the easy things."

Much of the criticism of Governor Walz has come in response to his decisions to limit who is open or closed in order to slow the spread of COVID-19.

"First I want to acknowledge this," he said. "Those restaurants are hurting and as I have said time and time again, this isn't fair. This is a virus that spreads when people are indoors, close contact, without a mask, next to people who aren't their immediate family. That is the definition of a bar or restaurant."

As of Monday, bars and restaurants are still closed to indoor dining. And also as of Monday, the numbers of positive tests and hospitalizations are coming down.

"It is dropping off again today and knock on wood for the first time we're under 2,000 cases," Walz said. The last time Minnesota dipped below 2,000 cases in one day was at the end of October.

Does the governor have any regrets about his decision to keep restaurants and bars restricted?

"No, not where the science is at and where health care system is at," Walz said. "I think what we thought was, is getting a view on the potential holiday surge, potential usage, bed usage, where we were at, get past the new year, we'll take a look again."

Will he open Minnesota back up in January?

"Well, we'll let the numbers see where we're at," he said.

And if the retired teacher had to grade himself on his performance as governor during a tumultuous 2020, what would his grade be?

"Probably a B. I think there's things we could have done differently," Walz said. "But I think leaders, governors, presidents, others, we needed to do a better job of being unified."