While the week one allotment of Pfizer appears to be on track, Minnesota health officials say week two is more than 40% smaller than expected. 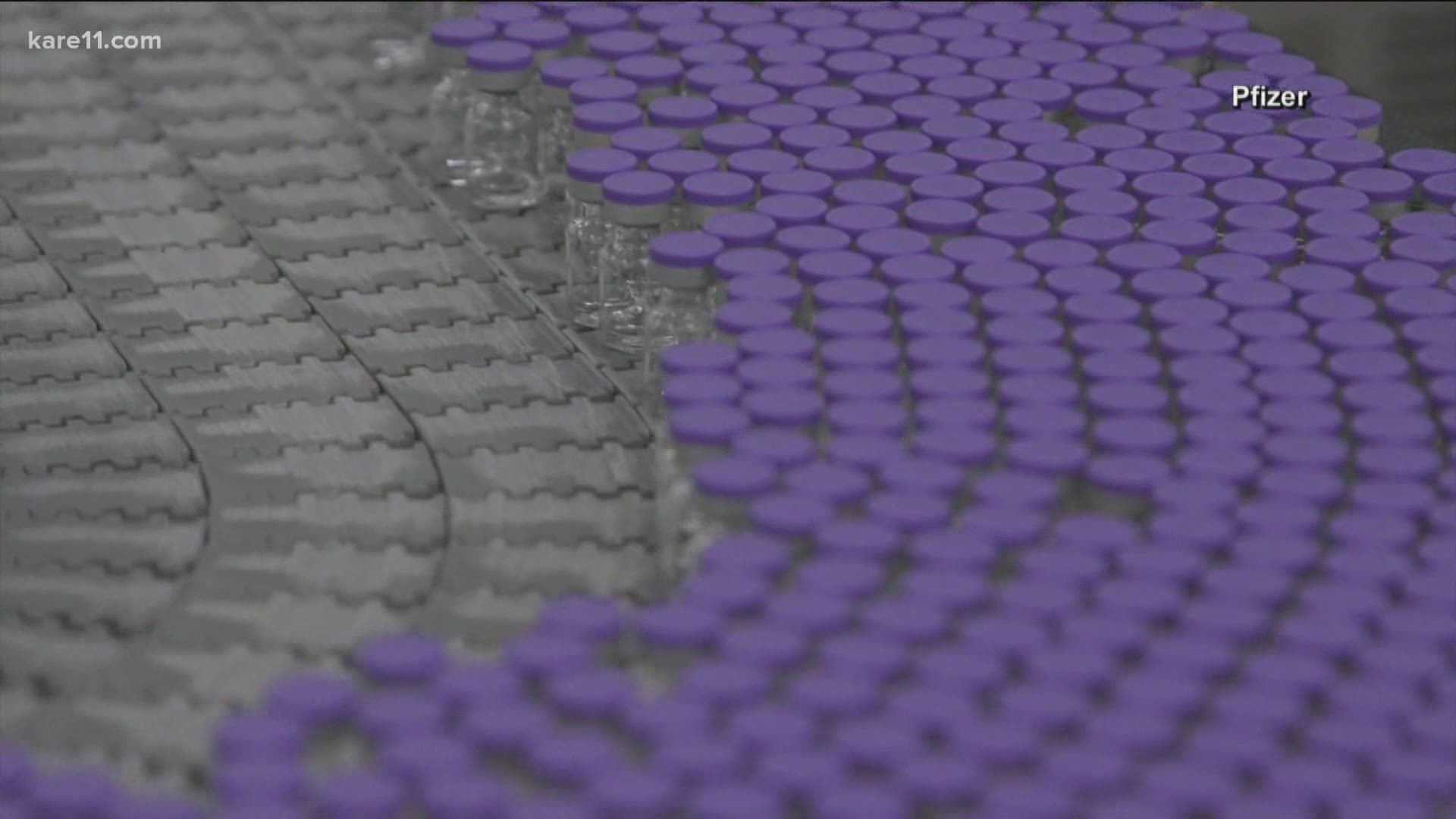 Minnesota health officials say their week two allotment of Pfizer COVID-19 vaccines is going to be smaller than expected, but they're expecting a larger number of Moderna doses if it's approved.

The Minnesota Department of Health (MDH) confirmed Friday that the state's week two allotment of Pfizer vaccine will be 33,000. That's significantly smaller than the 58,000 MDH was originally told Minnesota would receive.

Schultz said the week one allotment promised to Minnesota was 46,800 and from the latest reports, this is still on track.

These numbers could evolve, Schultz said.

“Pfizer has said the lesser amounts are due to manufacturing fluctuations,” said MDH Infectious Disease Director Kris Ehresmann during a media briefing call on Friday.

Ehresmann said 947 health care workers have been vaccinated in Minnesota. So it will take quite some time just to work through the first week's shipment of the vaccine.

"Unfortunately, there is still a very small amount of Pfizer vaccine that is available,”  she said. "We have more demand than we have supply.”

Pfizer, in a statement posted on the pharmaceutical giant's web page, disputed the idea that there's a production-related shortage of the vaccine.

"Pfizer is not having any production issues with our COVID-19 vaccine, and no shipments containing the vaccine are on hold or delayed," the statement read, in part.

"This week, we successfully shipped all 2.9 million doses that we were asked to ship by the U.S. Government to the locations specified by them.  We have millions more doses sitting in our warehouse but, as of now, we have not received any shipment instructions for additional doses."

Moderna cleared for use

According to NBC News, six million doses of Moderna's vaccine would be shipped out on Monday if the FDA approved it Friday.

The FDA cleared the Moderna vaccine for use late Friday. Ehresmann said she expected it could begin shipping next week.

Ehresmann said Minnesota officials have been told it will receive 94,900 doses of Moderna in the first shipment. She also said receipt of the first shipment of Pfizer should be completed by the end of the day Friday.

On pending Moderna vaccine distribution, @tomcostellonbc: "Six million doses would ship on Monday if the FDA gives the green light today. We expect the FDA will follow the advice of the outside advisory commission & issue an emergency use authorization." #AMRstaff

MDH is adding a new webpage to its site showing the latest vaccine numbers it’s getting from the federal government.

Ehresmann said Minnesota will get more shipments of both Pfizer and Moderna in the coming days.

“We’ll continue doing our best to strike that balance between hope and patience,” Ehresmann said.

She also said MDH is aware that there is extra Pfizer vaccine in each vial after the five prescribed doses have been used. The FDA has indicated that it is advising that it is acceptable to use every full dose obtainable, Ehresmann said, but until there is a written policy, providers should rely on their own internal guidance and protocols.

Ehresmann said Friday that Minnesotans should remember that the numbers coming from the federal government are variable and could change. Rather than guaranteeing a fixed number of doses for each state, Operation Warp Speed lays out a projection week by week of the supplies that will be shipped.

"The challenge in these first weeks is just going to be, how great is the supply and how deep into that prioritization can we get, how fast," MDH Commissioner Jan Malcolm said. "In the earlier phases of the planning the expectation was this first phase ... was only going to be health care workers."

Malcolm said the federal government added long-term care into that phase later in the planning, "rightly so," but that the change caused supply and demand challenges.

"The supply is so limited that nobody's getting as much as they want to vaccinate their workers as quickly as they want," Malcolm said.

She said MDH is "hopeful" that the supply will continue to grow.

Gov. Tim Walz has urged Minnesotans that though the vaccine represents a light at the end of the tunnel, the state is not out of the woods when it comes to COVID-19. Hospitalizations and new cases are trending downward across the state, but deaths remain high.

A four-week pause on bars, restaurants, social gatherings and sports was set to expire Friday at 11:59 p.m., but modified restrictions will now go into place at that time.