Doctors gave Greg Beaudoin two doses of convalescent plasma. The first dose, he said, did nothing. The second, saved his life. 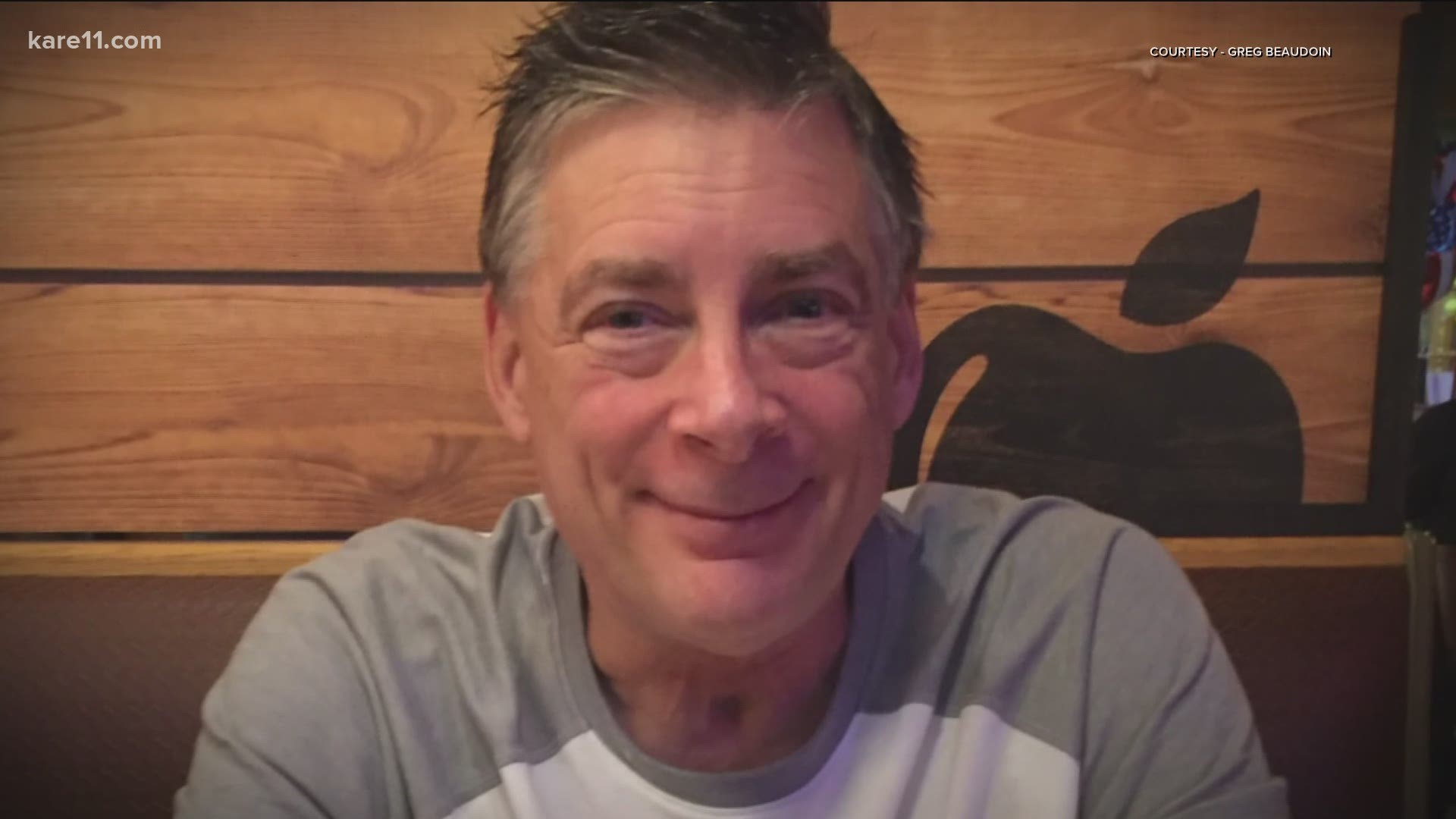 Greg Beaudoin spent a career helping patients on ventilators, until last March when he became one.

“I was taking care of my patients as a respiratory therapist,” said Beaudoin. “There were not masks available; there just wasn't [sic]. I caught it from patients that I was seeing that day.”

For 54 days, Greg was sedated and unconscious. A ventilator now breathing for him. He had double pneumonia, several surgeries and two strokes affecting his vision and cognitive function.

“My kids cried a lot. They heard messages 'They don't think he's going to be with us come morning,'” said Beaudoin.

As a last effort, doctors gave him two doses of convalescent plasma, which is a portion of blood from someone who'd survived COVID and has antibodies for the virus. The first dose, he said, did nothing. The second, saved his life.

"It was absolutely a miracle,” said Sue Beaudoin, Greg’s wife.

He left the ICU in June to the applause of M Health Fairview Bethesda Hospital staff, and he arrived home in July. Thanks, Greg says, to someone else's blood.

“I think for anyone who has given or is thinking of giving, you are actually letting another person to be able to be in a position where their body can fight for them and survive and get through it,” said Greg.

For a while, convalescent plasma was a bit of a mystery treatment. It worked for some patients and did nothing for others. Experts now know that high titer plasma—or high levels of antibodies—has shown to be more effective.

A new Mayo Clinic study just published in the New England Journal of Medicine helps answer those questions showing plasma with higher levels of antibodies did in fact save lives better than lower antibody plasma (low titer) or medium-titer plasma. The research found the treatment far more effective in patients not on ventilators.

“We think it does offer evidence that it can reduce mortality in the right patients, that are those not on a ventilator and those early in their hospitalized time course,” said Dr. Scott Wright, a Mayo Clinic cardiologist and coauthor of the study.

Wright says his and other research led to the FDA changing its emergency use authorization of convalescent plasma this month, suggesting only the highest antibody plasma be used on patients early in their disease.

And this change, according to Memorial Blood Centers, will create a void in supply of convalescent plasma as only the plasma with the highest antibody levels can be used.

So, I went to Memorial Blood Centers in Plymouth to see how the process of donating convalescent plasma works during a pandemic and find out how badly they needed the supply.

I tested positive for COVID-19 in November and recovered weeks later.

It wasn’t abundantly clear to me until this story that inside my body and the bodies of 26 million other Americans and 450,000 Minnesotans who've survived COVID-19 is a potentially very powerful treatment for others battling the disease.

Here are the qualifications for convalescent plasma donors:

I passed a pre-screening questionnaire and a finger-prick blood test verifying COVID-19 antibodies.

Then, I sat socially-distanced with a mask on for about 45 minutes donating blood, which was split into red blood cells and the antibody-rich plasma. The red blood cells were intermittently put back into my body.

“We used to have blood drives at high schools and churches and businesses,” said Dr. Jed Gorlin, medical director of Memorial Blood Centers. “We can't use our buses. There's no way you can keep six feet away in a bus. And so we've had much less ability to get out into the community. We need folks like you to come into our different sites.”

The pandemic crippled so many industries; blood donation is no exception.

Funding from the federal Operation Warp Speed mission helped blood banks recruit and test for donors of convalescent plasma, but demand for this treatment has outweighed supply.

“It's a win-win to donate blood after you recovered because your blood can be used to help other human beings prolong their lives and reduce suffering,” said Dr. Wright.