The U of M and UW campuses in Stout, Eau Claire and River Falls will move classes online after Thanksgiving. St Thomas adds to mass testing push. 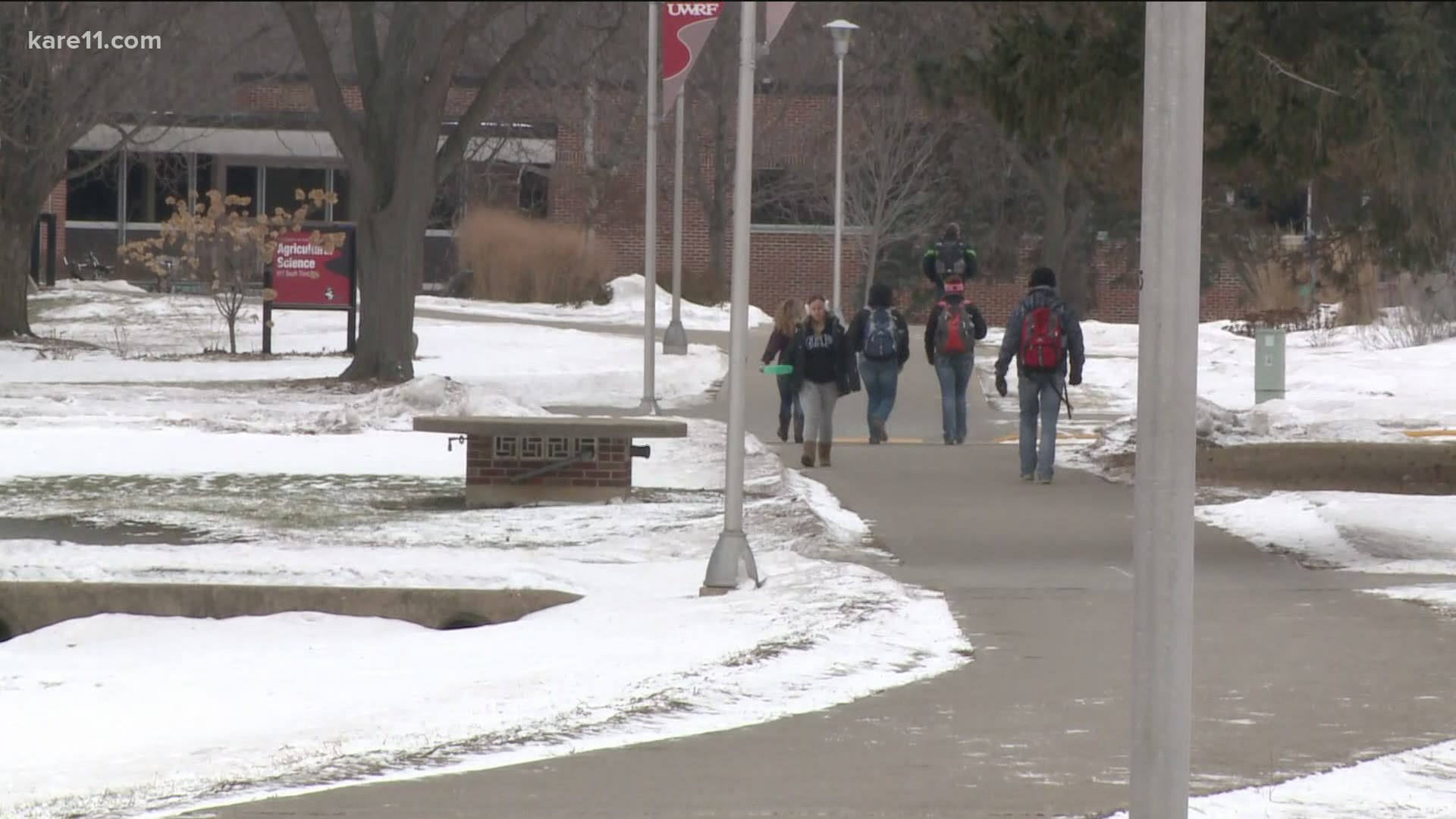 A day after the Mayo Clinic announced that beds in its northwestern Wisconsin hospitals are full due to a surge of COVID-19 patients, University of Wisconsin campuses in Stout, Eau Claire and River Falls announced that all classes will move online after Thanksgiving.

"We were feeling increased pressure and guidance from the health officials," said David Travis, Vice-Chancellor For Academic Affairs at UW River Falls. "With the hospitalization rates going up as they are, we didn't want to provide any increased risk, or likelihood, that those numbers would continue to rise."

Travis says they tried to prioritize in person learning throughout the fall, but he says student cases have surged in the last two weeks.

"River Falls was doing really, really well as a university, and really as a city for that matter, for the period leading up to the Halloween weekend. Unfortunately some of our students decided it was Halloween and it's time to have a little bit of fun and we did see an immediate increase," Travis said. "Within a few days we saw our numbers start to go up and they really haven't come back down yet. The problem with that is that once you kind of light that fire, spread happens and it's really difficult to slow it down."

Travis says the University wants to make sure students take precautions before leaving campus, and then don't feel pressured to return after any holiday gatherings.

"The back and forth is the problem. We were asking them to do multiple tests, both leaving and returning and really in a relatively short time frame," Travis said. "By making this decision, students can leave potentially a little bit earlier and have a little more expanded time to think about what's appropriate and safe when they return home to their families. We are asking all students to get tested before they leave."

The University of Minnesota, which had already planned to move classes online after Thanksgiving, is also asking students to get tested before going home. In addition to an expanded testing site at the campus recreation center, the UofM and MDH will launch an even bigger testing site inside the Field House on Monday, November 16th, and Tuesday, November 17th.

Then, on Wednesday, November 18th, and Thursday, November 19th, the mass testing site will move to the University of St. Thomas' Anderson Field House.

"We can't quite keep up with the volume and the demands right now," said Madonna McDermott, Executive Director of the University of St. Thomas Center for Well Being, which has been conducting testing throughout the fall. "Students are wanting to be tested, they want to know if they have been exposed or not."

McDermott says she's already encouraged by the students response to the testing expansion. More than 500 had signed up for testing slots just hours after it was announced on Thursday.

"That's exactly why we timed it (November) 18th and 19th," McDermott said. "We'll get the results back. We'll communicate that with the students, faculty and staff. Then they can make accommodations as they need to. If they're positive they may choose to stay on campus or stay in their off campus housing and not go home."

Even if those tests are negative, McDermott says making it home safely will require diligence.

"The plan and the advice really follows what governor Walz is recommending," she said. "Stay in place or a self, mini-quarantine between now and going home for Thanksgiving."

"We're encouraging students just to think about the risk situation that their families are in," Travis said. "If they are feeling, in any way, that they are returning to a vulnerable situation, to try and isolate themselves as much as possible."