Whether closing tapings to studio audiences or shutting down access to locker rooms, concerns about the coronavirus are impacting our pastimes. 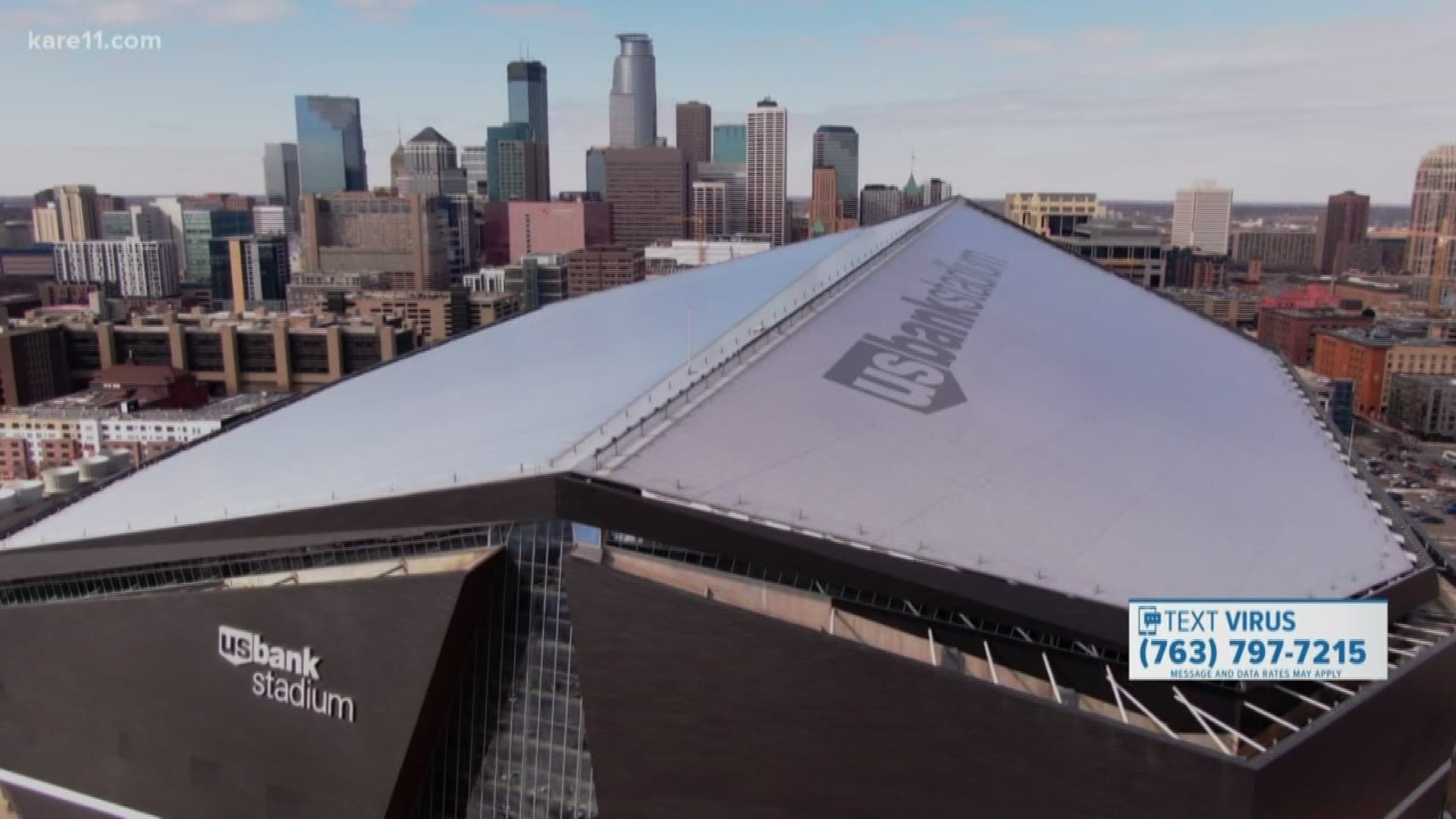 With the World Health Organization classifying COVID-19 as a pandemic, governments and groups all over the world are working to stem the spread.

Precautionary measures are being taken to cancel or postpone many events, including in the entertainment and sports worlds.

INDYCAR has canceled all NTT INDYCAR Series events through April. That includes the Firestone Grand Prix of St. Petersburg, which was supposed to start March 13 and run through Sunday, March 15. The AutoNation INDYCARE Challenge at Circuit of the Americas in Austin, Texas is also canceled for April 24-26. INDYCAR put out a statement Friday, March 13, saying "Although we are disappointed to delay the start to this INDYCAR season and will miss our incredible fans who support us each year in St. Petersburg, Birmingham, Long Beach, and Austin, the safety of our fans, participants, staff, partners, and media will always remain our top priority. We will continue to coordinate with public health experts and government officials as we determine the appropriate plans for resuming our schedule."

The Masters, long an annual rite of spring for golf, won't be teeing off as usual this year. Organizers have postponed the storied tourney until a later date due to rising concerns over the coronavirus.

Augusta National did not indicate when the Masters would be played. The decision means there will be no golf at least for the next month.

"The health and well-being of everyone associated with these events and the citizens of the Augusta community led us to this decision," explained Fred Ridley, Chairman of Augusta National Golf Club. "We hope this postponement puts us in the best position to safely host the Masters Tournament and our amateur events at some later date."

The Masters began in 1934 and only World War II has kept it from being played.

The Big Ten Conference, the SEC and the AAC have all canceled the remainder of their men's basketball tournaments due to coronavirus concerns. The conferences made the announcements official Thursday shortly before noon Eastern time.

In a statement, the Big Ten conference said it will use the time to "work with the appropriate medical experts and institutional leadership to determine next steps for moving forward in regard to the COVID-19 pandemic."

The MLS has suspended match play for 30 days, effective immediately, as Major League Soccer continues to assess the impact of coronavirus. The MLS says more information will be communicated "at the appropriate time."

The Loons were supposed to host their home opener at Allianz Field Sunday.

"With the rapidly evolving situation regarding COVID-19, Minnesota United fully supports the decision by Major League Soccer to suspend the 2020 season for 30 days," the Loons said in a released statement. "We as a club believe the health and safety of our community, our fans, players and staff is of the utmost importance. We will continue to work with MLS and the Minnesota Department of Health on next steps.

We look forward to welcoming our community and all fans and stakeholders back to Allianz Field in 2020."

The NBA has suspended its season “until further notice" after a Utah Jazz player tested positive Wednesday for the coronavirus, a move that came only hours after the majority of the league's owners were leaning toward playing games without fans in arenas.

League officials released a statement on the decision Wednesday, March 11.

"The NBA announced that a player on the Utah Jazz has preliminarily tested positive for COVID-19. The test result was reported shortly prior to the tip-off of tonight’s game between the Jazz and Oklahoma City Thunder at Chesapeake Energy Arena. At that time, tonight’s game was canceled. The affected player was not in the arena.

The NBA is suspending game place following the conclusion of tonight’s schedule of games until further notice. The NBA will use this hiatus to determine next steps for moving forward in regard to the coronavirus pandemic."

The NCAA announced on Wednesday, March 11, that the upcoming championship events, including Division I men's and women's basketball tournaments, will be played with only essential staff and limited family attendance.

"While I understand how disappointing this is for all fans of our sports, my decision is based on the current understanding of how COVID-19 is progressing in the United States," said NCAA President Mark Emmert in a statement. "This decision is in the best interest of public health, including that of coaches, administrators, fans and, most importantly, our student-athletes."

Major League Baseball, Major League Soccer, the National Basketball Association and the National Hockey League said in a press release that locker rooms and clubhouses will be restricted to players, coaches and essential team personnel.

Here is the statement, in full:

After consultation with infectious disease and public health experts, and given the issues that can be associated with close contact in pre and post-game settings, all team locker rooms and clubhouses will be open only to players and essential employees of teams and team facilities until further notice.  Media access will be maintained in designated locations outside of the locker room and clubhouse setting.  These temporary changes will be effective beginning with tomorrow’s games and practices

We will continue to closely monitor this situation and take any further steps necessary to maintain a safe and welcoming environment.

A ban on large crowds in the Seattle, Washington area will also force changes to be made to an early-season series scheduled between the Minnesota Twins and Seattle Mariners, which was set to be played March 30-April 1 at T-Mobile Park in Seattle.

Also from the sporting world:

Ivy League Executive Director Robin Harris announced Tuesday, March 10, that the conference's presidents have decided to cancel the upcoming Ivy League Men's and Women's Basketball Tournaments. Both tournaments were scheduled to take place this weekend at the Lavietes Pavilion in Cambridge, Massachusetts.

The Rolling Stones have postponed their North American "No Filter" tour (including a stop in the Twin Cities at U.S. Bank Stadium May 16) citing the global coronavirus outbreak. “We’re hugely disappointed to have to postpone the tour," read a statement from the Stones. "We are sorry to all the fans who were looking forward to it as much as we were, but the health and safety of everyone has to take priority. We will all get through this together – and we’ll see you very soon.”  Promoter AEG Presents/ Concerts West advises ticketholders to hold onto their original tickets until an announcement is made.

Both Jeopardy! and Wheel of Fortune will tape without studio audiences in response to the ongoing COVID-19 outbreak, sources tell the Associated Press. The popular game shows tape months in advance, so the change will not be immediately apparent to viewers. Variety notes that in addition to protecting audience members, Jeopardy! host Alex Trebek is among the higher risk groups as he fights Stage 4 pancreatic cancer.

RELATED: 'Jeopardy!' and 'Wheel of Fortune' to tape without audiences due to coronavirus

Pearl Jam has postponed its spring tour, announcing that shows set between March 18 and April 19 will be rescheduled. Band members say they have been personally impacted by the coronavirus because their children's schools have been closed. The band's home state of Washington has been among America's hardest-hit areas. Two dozen people have died from the virus, most at a Seattle-area nursing home.

Billboard is reporting that the 2020 Coachella music festival may be pushed to the weekends of Oct. 9 and 16 in an attempt to save the event. There has been talk about canceling the festival, currently set for April 10-19 in Indio, California, over coronavirus concerns. Promoter Golden Voice is also behind the Stagecoach country music festival, which reportedly could be pushed to October 23. Billboard reports a decision on both festivals could be made in the next 48 hours.

RELATED: Reports: Coachella and Stagecoach music festivals may move to October due to coronavirus

Last week, South by Southwest announced that its 2020 festival, set for March 13-22, was canceled by the city of Austin, TX.

KARE 11’s coverage of the coronavirus is rooted in Facts, not Fear. Visit kare11.com/coronavirus for comprehensive coverage, find out what you need to know about the Midwest specifically, learn more about the symptoms, and keep tabs on the cases around the world here. Have a question? Text it to us at 763-797-7215.