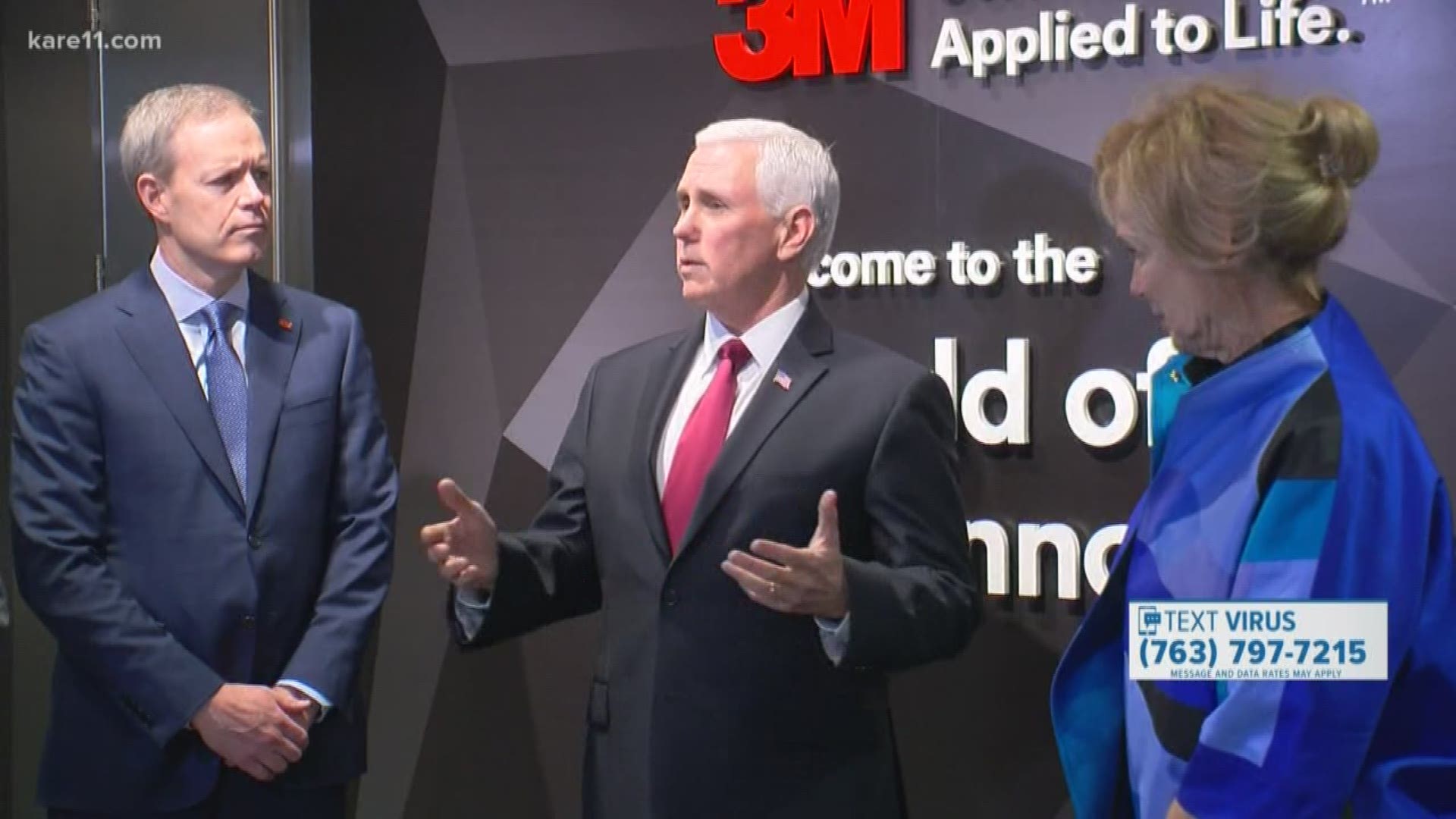 MAPLEWOOD, Minn — Vice President Mike Pence said Thursday there's a role for everyone to play in controlling the spread of coronavirus in the United States, from average citizens to government agencies to corporate America.

"Really, truthfully, it's a whole of American approach," the vice president told reporters during a tour of 3M's Innovation Center at that company's global headquarters in Maplewood.

"The American people can be confident we're ready and we're going to continue to lean into this effort of the corona virus across the country."

He praised 3M for its role in the worldwide effort to contain the COVID-19 virus and noted the company accelerated the production of the blue medical respiratory masks with the N-95 rating immediately upon news of the outbreak.

On the tour, Pence learned 3M is producing four million of those blue masks each month. The company's also making 35 million other styles of masks that could also be helpful to medical providers on the front lines pending approval of the regulators.

RELATED: Facts not fear: What Minnesotans should know about coronavirus

"The balance of what they produce are industrial N-95 masks that currently don’t have protection under emergency provisions of the law," Pence explained.

"Governor Walz and I are going to work with Congress to extend legal protections under the public health emergency President Trump has declared to make it possible for 3M and other companies in this space to be able to sell both types of masks to be available for this."

Dr. Birx repeated urged healthy Americans from buying up supplies of those blue masks, so those who need them the most -- coronavirus patients and medical providers -- are able to find them.

She pointed out the masks are designed to contain the respiratory droplets of people who are infected, but not considered a shield for healthy people.

"If a person who's infected is wearing the mask, that decreases the amount of droplets that are available, the same way as coughing into your elbow, or not shaking hands, and washing hands all of the time does," Birx explained.

RELATED: VERIFY: Hand sanitizer can protect against coronavirus, but not as well as washing your hands

"If those individuals who have the virus are doing all of those things, the risk to the general public becomes less and less. But those masks won’t protect you from the droplets because you will pull air in through the sides that includes those particles."

The vice president said the federal government is also working with American corporations to boost production of testing kits.  He said states have received enough kits for 1.5 million tests, which should be sufficient for the current caseload.

But health providers will need need a far larger supply of those kits to make the test available as virus spreads throughout the nation.

"We’re going to find more Americans have contracted the corona virus, but fortunately for most people that contract this virus they will recover and recover fully," Pence explained.

"But there is a vulnerable population and healthcare providers. And so we simply want to make sure we have all of the resources available."

As the Vice President was leaving, he shook hands with Governor Walz and 3M officials. He extended his hand to Health Commissioner Malcolm, but she offered him the more sanitary elbow bump instead.

That moment was captured by Minneapolis Star Tribune photographer Glen Stubbe, who posted it to Twitter.  That tweet itself became viral, so to speak.

KARE 11’s coverage of the coronavirus is rooted in Facts, not Fear. Visit kare11.com/coronavirus for comprehensive coverage, find out what you need to know about Minnesota specifically, learn more about the symptoms, and keep tabs on the cases around the world here. Have a question? Text it to us at 763-797-7215.