The positive test involved an infectious person who attended the North Star Stampede in Itasca County from July 24-26. 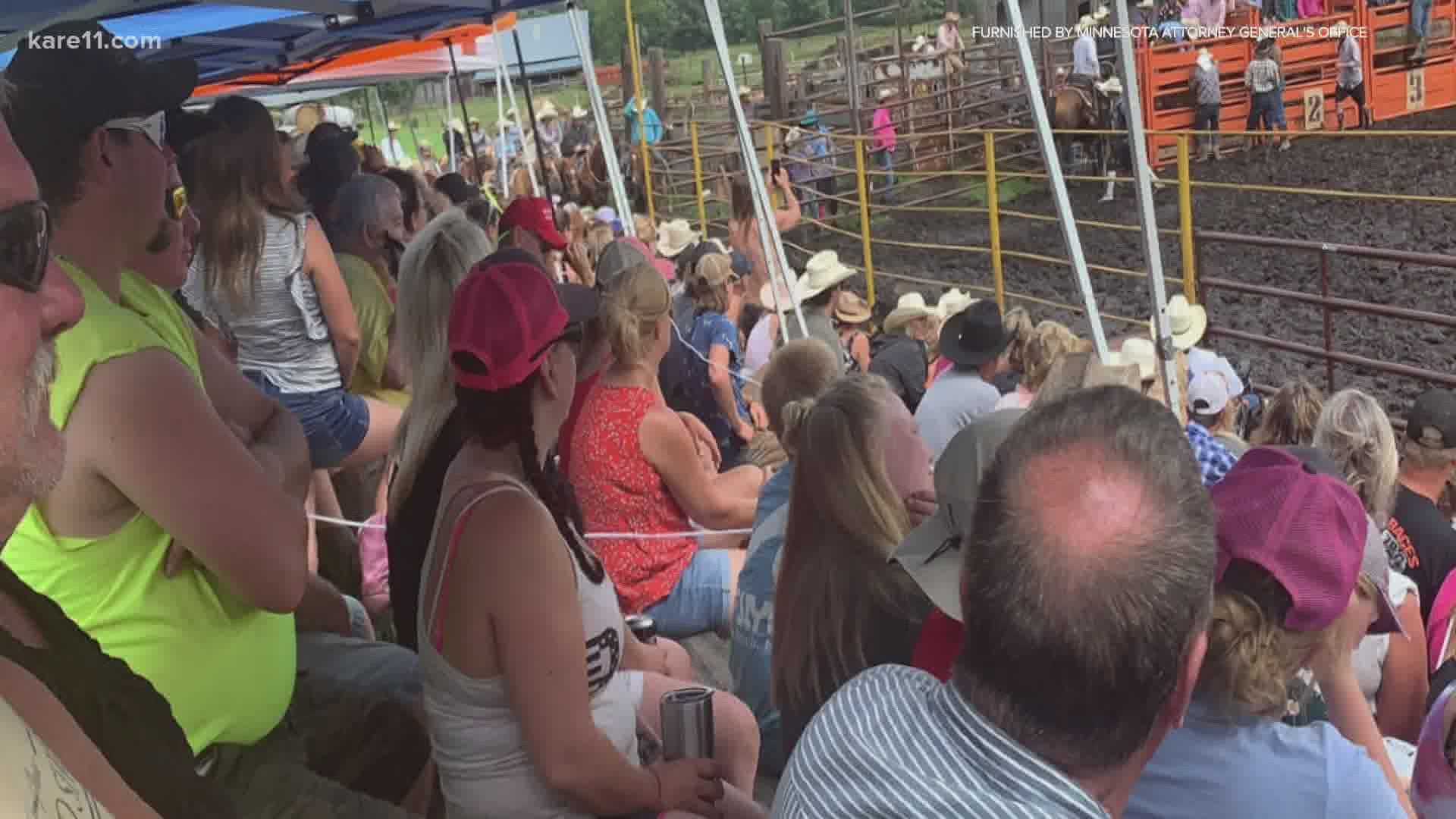 EFFIE, Minn. — The Minnesota Department of Health (MDH) is urging people who attended the North Star Stampede in Itasca County from July 24-26 to be on the lookout for potential symptoms of COVID-19, after learning an infectious person was in attendance.

Attorney General Keith Ellison is also bringing an enforcement action against rodeo organizers, after state officials said "thousands" of people were in attendance, against the state's executive order on large gatherings.

MDH said the person developed symptoms on July 27 and tested positive for COVID-19 that day. Health officials say people can be infectious for several days before symptoms appear, leading MDH to believe the person was infectious while at the event.

"We know there were many, many people at this event, so there's certainly the possibility of other exposures. We don't know how many, we're still doing the follow-up investigation, but we just want to get the word out right now given the number of people at that event," Minnesota Health Commissioner Jan Malcolm said in a conference call with reporters on Friday.

No other illnesses connected to the event have been reported so far; however health officials note that the incubation period for COVID-19 can be as long as 14 days.

Many people attending the rodeo were not wearing masks or social distancing, according to MDH Infectious Disease Director Kris Ehresmann.

"We want to just encourage anyone who was at that ... event to be vigilant, watch for symptoms, get tested if you do develop symptoms. We would urge you to limit public activities for the next 14 days," Malcolm said.

State officials, including the Attorney General's Office and MDH, had spoken to rodeo organizers about safety precautions in the days prior to the event, according to the news release. However, Ellison's office noted that organizers later posted to the rodeo's Facebook group saying: "The North Star Stampede will take place with no spectators.  If people would like to come and protest against this ridiculous Government Over Reach, feel free to do so, I will not stand in the way of peoples ‘Right to Assemble.’"

The Attorney General's Office said, despite the claim of "no spectators," there were still "many attendees that entered the rodeo event venue on July 24, 25, and 26 congregated in the bleachers surrounding the dirt arena and watched each day’s rodeo competitions. Once it accepted people inside, the rodeo accepted 'donations' and sold programs to attendees listing the rodeo’s events."

A complaint filed in the enforcement action included photos of the crowds in attendance, as well as a photo of a sign posted at the rodeo's entrance on July 24, notifying attendees they were entering at their own risk, and stating that rodeo organizers were not responsible for any injuries or illness.

Ellison's action against rodeo organizers asks a court for up to $25,000 in civil penalties, as well as other potential damages and restitution.

"Stopping the spread of COVID-19 is everyone's responsibility. It's in all Minnesotans' interest for businesses and events to comply with the law and the Governor’s executive orders so that we can protect ourselves, our loved ones, our communities, and our livelihoods," Ellison said in a statement.

Rodeo organizers have not commented publicly on the enforcement action thus far.

This is the first action brought by the Attorney General's Office against an entertainment venue to enforce Executive Order 20-74, which requires certain businesses to develop COVID-19 plans and follow certain health guidance. Such orders have the force of law during the COVID-19 peacetime emergency.