Restaurant owners across the Twin Cities say it's critical for Congress to pass relief aid. 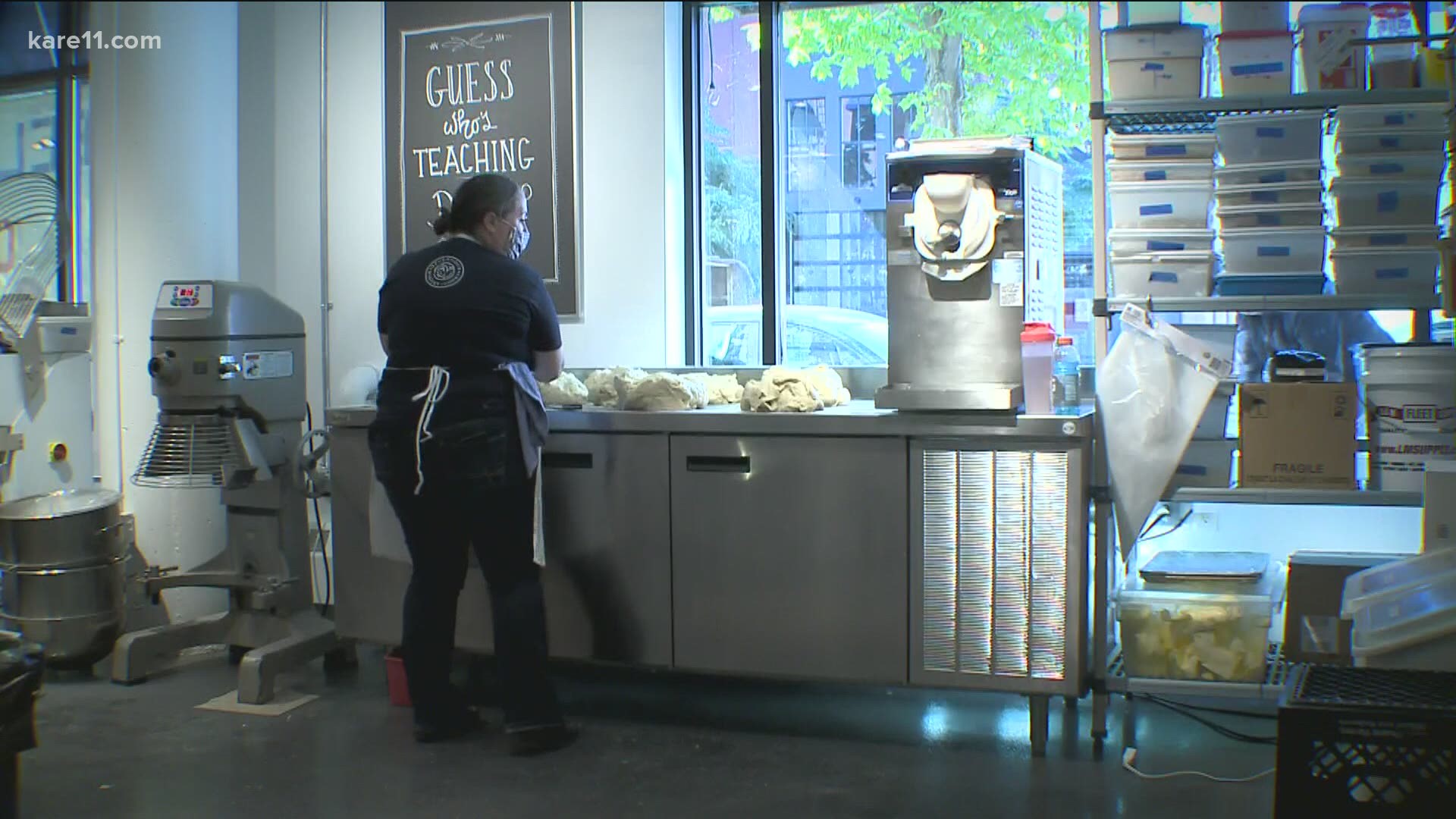 MINNEAPOLIS — In most respects, the scene outside Bellecour Bakery at Cooks in the North Loop appeared standard on Saturday morning. With masks and face coverings, customers quickly grabbed coffee and croissants before heading off for an early stroll through the neighborhood.

That’s exactly what owner Gavin Kaysen envisioned when he opened this new Bellecour location in September: a specialty to-go bakery designed specifically for the pandemic lifestyle.

And it’s going to help carry him through at least the next four weeks of another difficult dial-back period in Minnesota, which forced his restaurant across the street – Spoon and Stable – to stop dine-in service effective 11:59 p.m. Friday evening.

“It’s not a great position to be in. But, I can tell you, in March when we had to shut down, it was very extreme and it was very quick. Personally, I had to manage out of a lot of fear, the anxiety of a lot of unknowns, and we had no idea what was going on. I couldn’t even say thank you to my team in March; I had to send them an email at 11:30 at night on a Sunday to tell them they were unemployed,” Kaysen said. “Whereas on this go-around, at least I could say thank you to every single one of them, and say: ‘We'll be back, this is what's going on, we've been through it before.’”

Many in the Twin Cities restaurant industry worry, and perhaps expect, that Gov. Walz will ultimately extend the four-week pause well past Dec. 18. For that reason, Kaysen and others are calling for immediate federal relief aid to help struggling business owners and their laid-off employees.

Earlier this fall, the House of Representatives passed $120 billion in aid to independent restaurants through the RESTAURANTS Act, part of the broader stimulus package under discussion in Congress. However, as that measure stalls in the U.S. Senate – where the political fate of the future majority rests with Georgia run-off elections this winter – more and more restaurants fear they’ll succumb to closure.

“It’s been detailed as a bailout. This is not a bailout. This is survival, this is humanity,” Kaysen said. “We’re not asking for a favor, we’re asking to put back our team into the restaurants, to have jobs and all necessary needs to move forward. D.C needs to step up and come together.“

The RESTAURANTS Act would provide the most significant source of aid, but there are smaller efforts at the state and local levels as well. Gov. Walz announced $10 million in relief for small businesses this month, and counties like Hennepin are offering grant programs that provide up to $15,000.

Charlie Broder, whose family has owned multiple restaurants in southwest Minneapolis for decades, said “we expect it, in fact we demand it,” when it comes to additional aid.

“We're going to lose restaurants rapidly, especially right now, into next week, over the next few weeks and months,” Broder said. “Pass the RESTAURANTS relief act, please, at the highest levels of the federal government.”

Broder’s restaurants, which include Broders’ Pasta Bar, Broders’ Cucina Italiana and Terzo, have always enjoyed success from the takeout model, even prior to the pandemic. But the conditions of COVID-19 have forced them to become even more creative, leading to the creation of Broders’ Pork and Piccata that operates from Terzo.

“[Takeout customers] have been supportive,” Broder said. “We hope they will help us survive until April.”

That’s a common sentiment in the hospitality industry. The founder of Black Sheep Pizza, in fact, made very similar comments earlier this fall in an interview with KARE 11, when he said “our plan is to survive until things hopefully loosen up … We want to make it to spring.”

The restaurant industry won’t truly reach full strength until a vaccine becomes widely available – and that timeline, of course, depends on many factors.

But the difficult circumstances remind Gavin Kaysen of a quote he recently heard:

“We can either take this time and become better, or we can become bitter,” Kaysen said. “And I refuse to be bitter.”