When UMD came up with an extensive COVID-19 signage plan for Kirby Student Center, Mat Gilderman decided to have some fun with it. 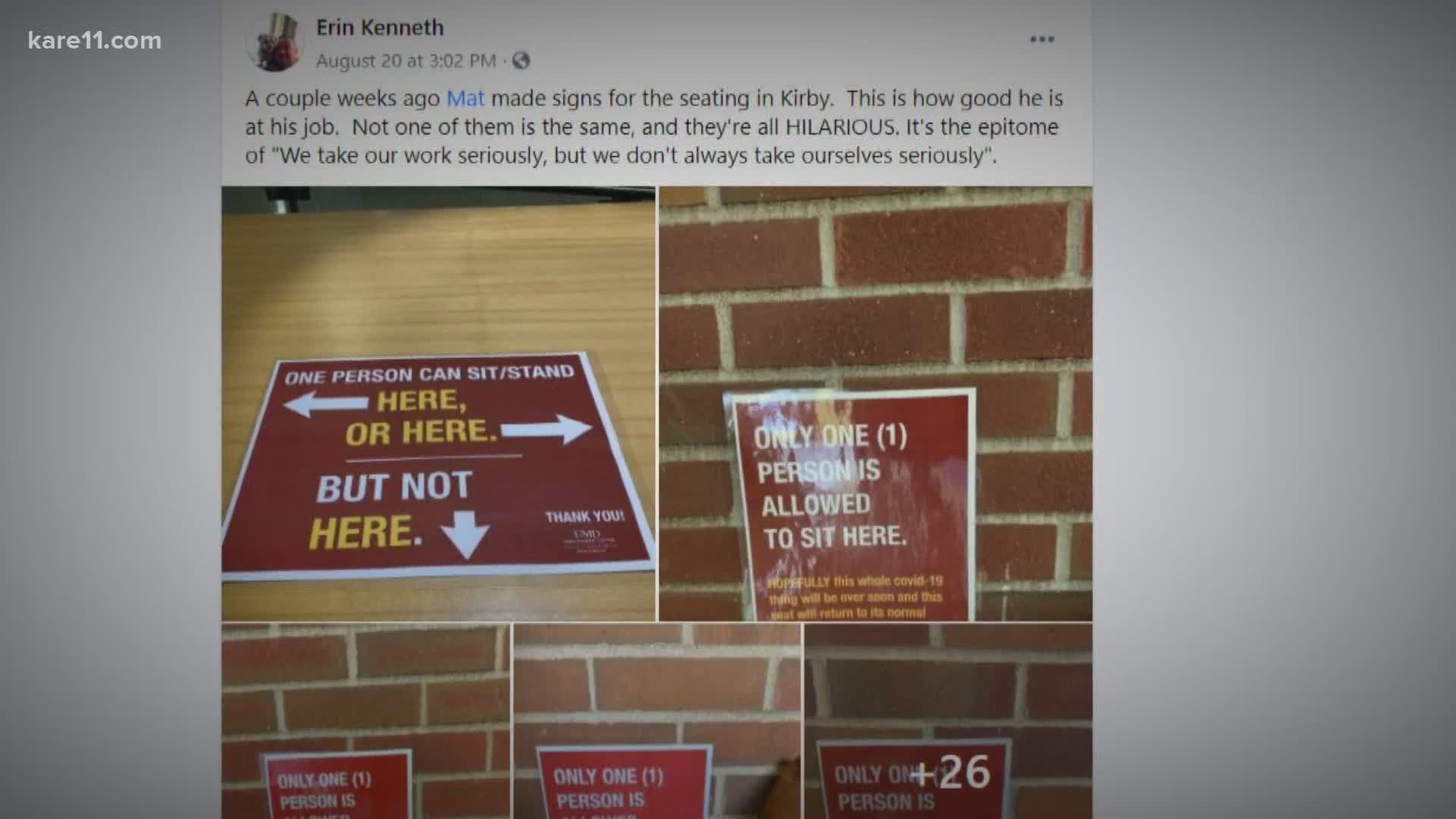 DULUTH, Minnesota — There are many signs that point to a very different back-to-school experience this year. That's literally true at the University of Minnesota Duluth (UMD). A staff member has made some attention-grabbing signs to remind students to social distance.

"Our director and our associate director actually came up with a pretty elaborate and extensive signage plan pretty much saying here's what you can do, here's what you can't do physically around our student center. They gave it to me and said, 'Can you make these signs?'" explained Mat Gilderman, communications manager for Kirby Student Center.

With their blessing, Gilderman decided to have some fun with it. He created about 30 different signs with unique captions on each one.

"I assumed they'd be like, 'I mean these are funny but we can't have these up.' But they were like, 'We gotta do this. We gotta put all these up,'" Gilderman said.

Credit: Erin Olson
"This one was very popular," said Mat Gilderman. The sign is one of about 30 Gilderman created for the Kirby Student Center.

Many of the signs point out that only one person is allowed to sit in a booth. In a smaller font underneath, one sign says, "If UMD allowed students to bring dogs on campus, your dog would be able to sit in this seat, too. But they don't. Why would we even mention this? We're sad now."

Gilderman's colleague, Erin Olson, posted the signs on his Facebook page—leading to more than 3,600 shares.

"All it is is just dumb humor and I love that people love it," Gilderman said. "This one was very popular. It says, 'Please do not sit here. Sitting here would cause you to potentially fall in love with the person across from you, ain't nobody got time for that.' One student said, 'I have time for that.'"

Gilderman said it's one way to ease the tension during a stressful time. The University of Minnesota's Board of Regents voted to delay move-in day by two weeks at three of its campuses, including UMD. Students will move onto the Duluth campus starting Wednesday.

RELATED: How U of M students feel about move-in delay, online classes

"We want students to stay six feet apart in Kirby Student Center mainly because we want UMD to stay open. We want everybody to stay very healthy. But we also don't want students to come into Kirby and be nervous that we're going to yell at them if something happens because that's not the case," Gilderman said.

He went on to say, "So the signs were kind of a thing saying, we can have fun with this but please just stay apart."