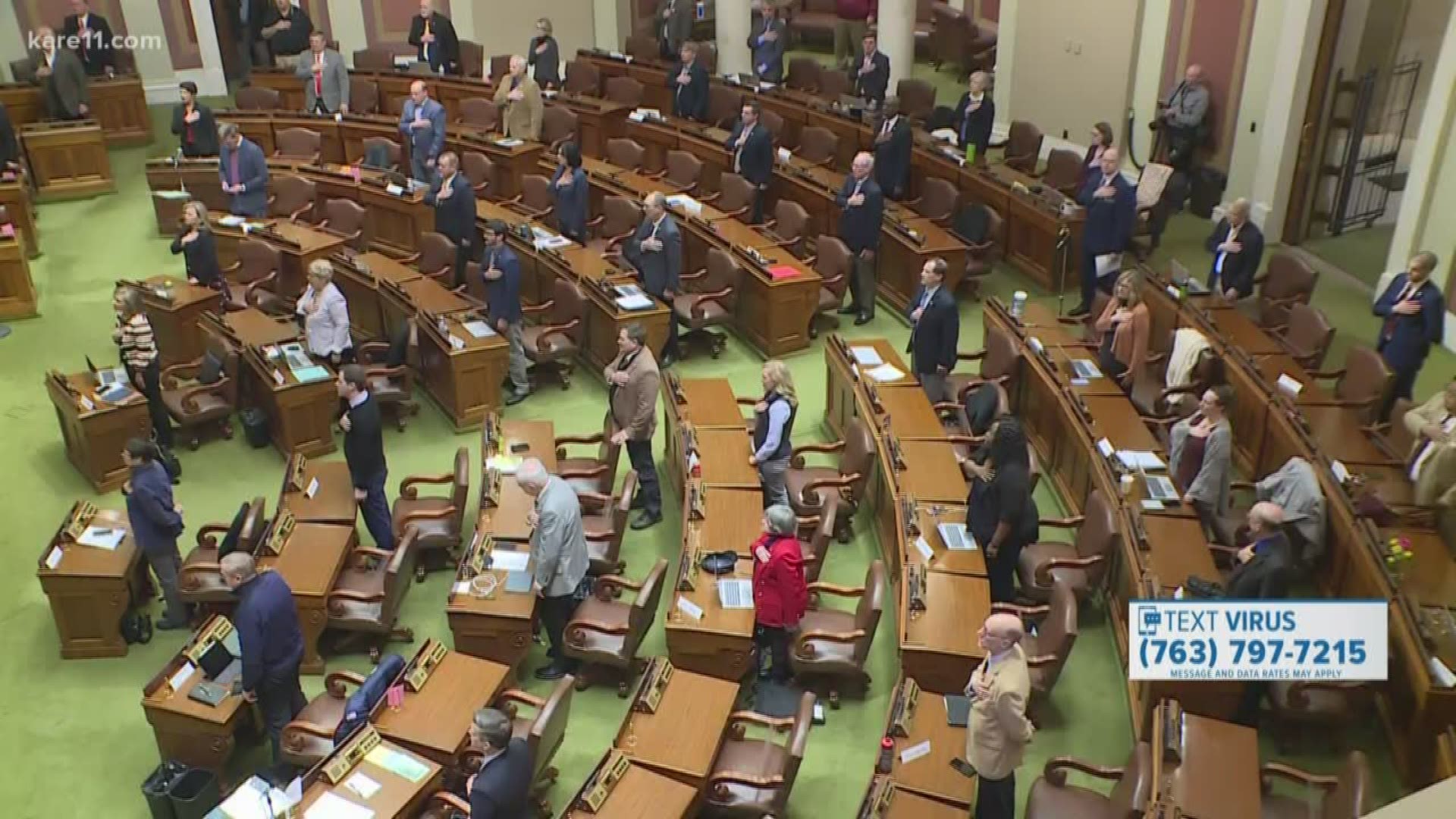 ST PAUL, Minn. — The Minnesota Legislature passed a $330 million financial aid package Thursday to help soften the economic impact and help public agencies and the state's health system kick into high gear to fight the coronavirus pandemic that has sickened more than 300 people and killed two in the state.

The Minnesota Department of Health said Thursday that the state's second COVID-19 death was a patient from Ramsey County who, like the first fatal case, was in their 80s. The state's count of confirmed cases jumped Thursday to 346, up 59 from a day earlier, with 44 patients hospitalized and 18 in intensive care. Their ages range from 5 months to 104 years,

The House passed the bill 99-4 and sent it to the Senate, which approved it 67-0 and sent it to Gov, Tim Walz for his signature. Among the bill's highlights are a $200 million fund that state agencies can tap for responding to the pandemic. It also would provide $30 million in grants to groups that provide child care for children of essential workers. And it also includes $40 million in emergency grants and loan guarantees for small businesses,

“We have grave and difficult days ahead," Democratic House Majority Leader Ryan Winkler said just before the vote. ”We do not know — and probably not knowing is the most difficult part of what the course of this pandemic will take. ... We have much work to be done. This is just the beginning. But it is an important first step."

One provision dropped from the bill at the last minute would've provided workers compensation coverage to first responders who catch coronavirus. The language would've made COVID-19 a "presumptive workplace disease" meaning if firefighters, police or nurses contract the virus it would be presumed it happened while they were on the job.

"I feel let down. I feel betrayed. I feel that pat on the back first responders have been getting from some of the so-called public servants in this Capitol just became a knife in the back," Captain Chris Parsons, head of the Minnesota Professional Firefighters Association, told reporters.

Members of his union, the Minnesota Nurses Association, Minnesota Peace and Police Officers association stood on the front steps of the Capitol spaced apart for social distancing.

"It’s just a matter of time before we are sickened. First responders do not have the option to work from home."

The bipartisan bill, authored by Republican Sen. Jeff Howe and DFL Rep. Dan Wolgamott, was part of the legislative package at one time. But it was dropped after statewide business groups objected via the Workers Compensation Advisory Council. 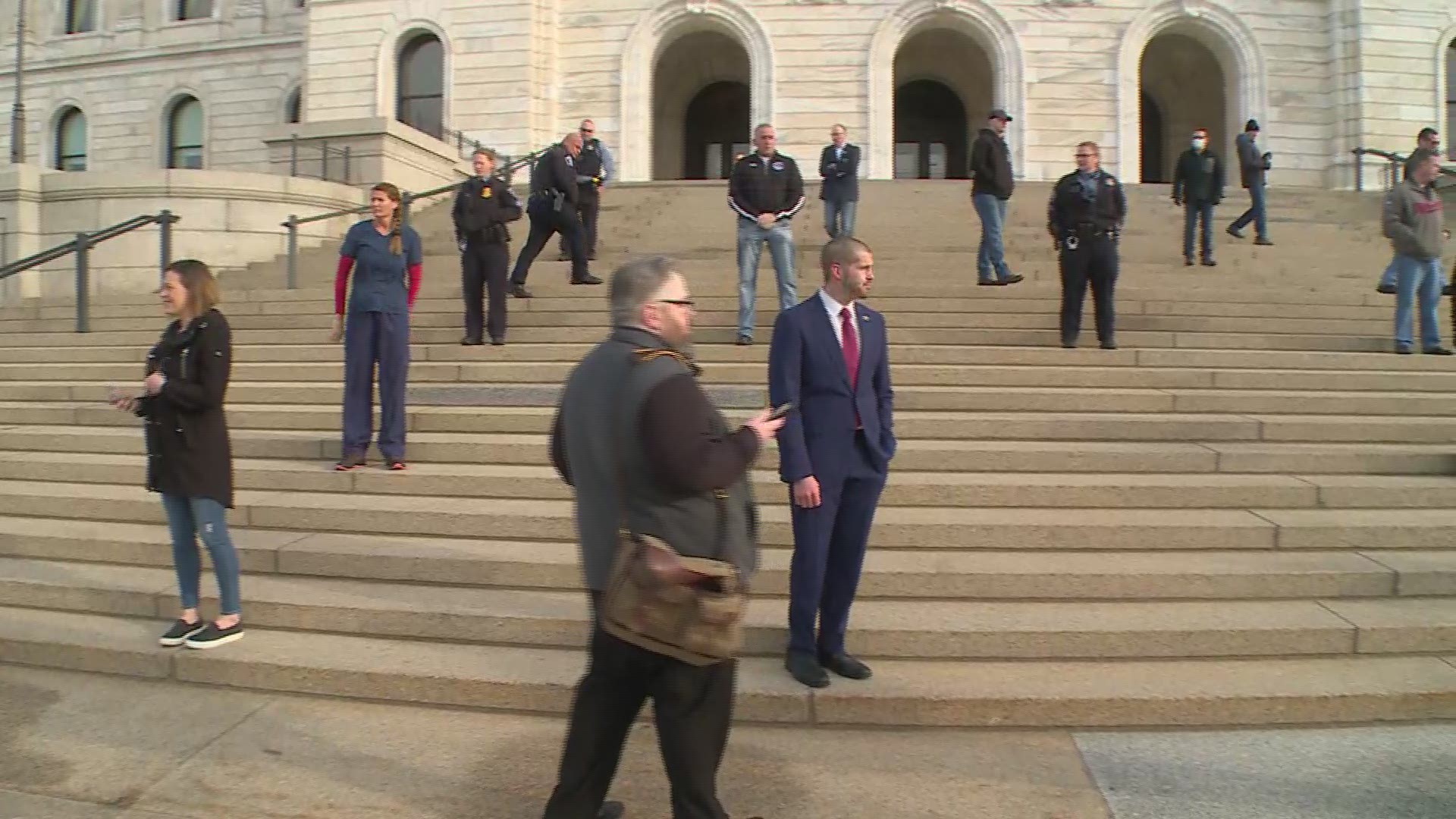 The bill was assembled via private conference calls to keep lawmakers from risking catching the disease, and the various proposals were rolled into one big bill to limit the number of votes that must be taken. Makeshift House and Senate procedures to maintain social distancing mean that lawmakers had to take turns for getting on the floors to vote or speak and wait elsewhere in the Capitol complex until their turn comes up. Many had to shout their votes from the door to the House chamber, then leave without entering.

Democratic House Speaker Melissa Hortman said in an interview that state residents deluged lawmakers with messages that were “incredibly helpful” in shaping the legislation, and offers of help that were passed to government agencies.

“There's been more public input into this legislation than anything I've worked on in my entire career in the Legislature,” she said.

Walz, who signed a stay-at-home order for Minnesota residents that takes effect Friday night, used his daily conference call with reporters to decry what he called an upsurge in hate speech directed against Asian-Pacific Islanders in the state. Across the country, Asian Americans have complained that President Donald Trump's habit of calling COVID-19 the “Chinese virus” puts them at risk of discrimination and hate crimes.

The governor said his administration is getting a lot of discrimination calls. He said he's even hearing from members of his staff about people turning away, “not social distancing but just clearly because of being Asian or Pacific Islander.”

“It's unacceptable," he said. “This virus doesn't discriminate. We're not going to either.”

For most people, the coronavirus causes mild or moderate symptoms, such as fever and cough that clear up in two to three weeks. For some, especially older adults and people with existing health problems, it can cause more severe illness, including pneumonia, or death.

Minnesota will also be getting money as part of the $2.2 trillion congressional relief package that the U.S. Senate passed late Wednesday and that the House is expected to pass on Friday. The bill includes nearly $2.2 billion for the state as part of a $150 billion stimulus package for state, local and tribal governments, according to the National Conference of State Legislatures.