Trump declares churches 'essential,' calls on them to reopen

The president announced at an abrupt White House briefing Friday that governors should allow churches and places of worship to open during the pandemic. 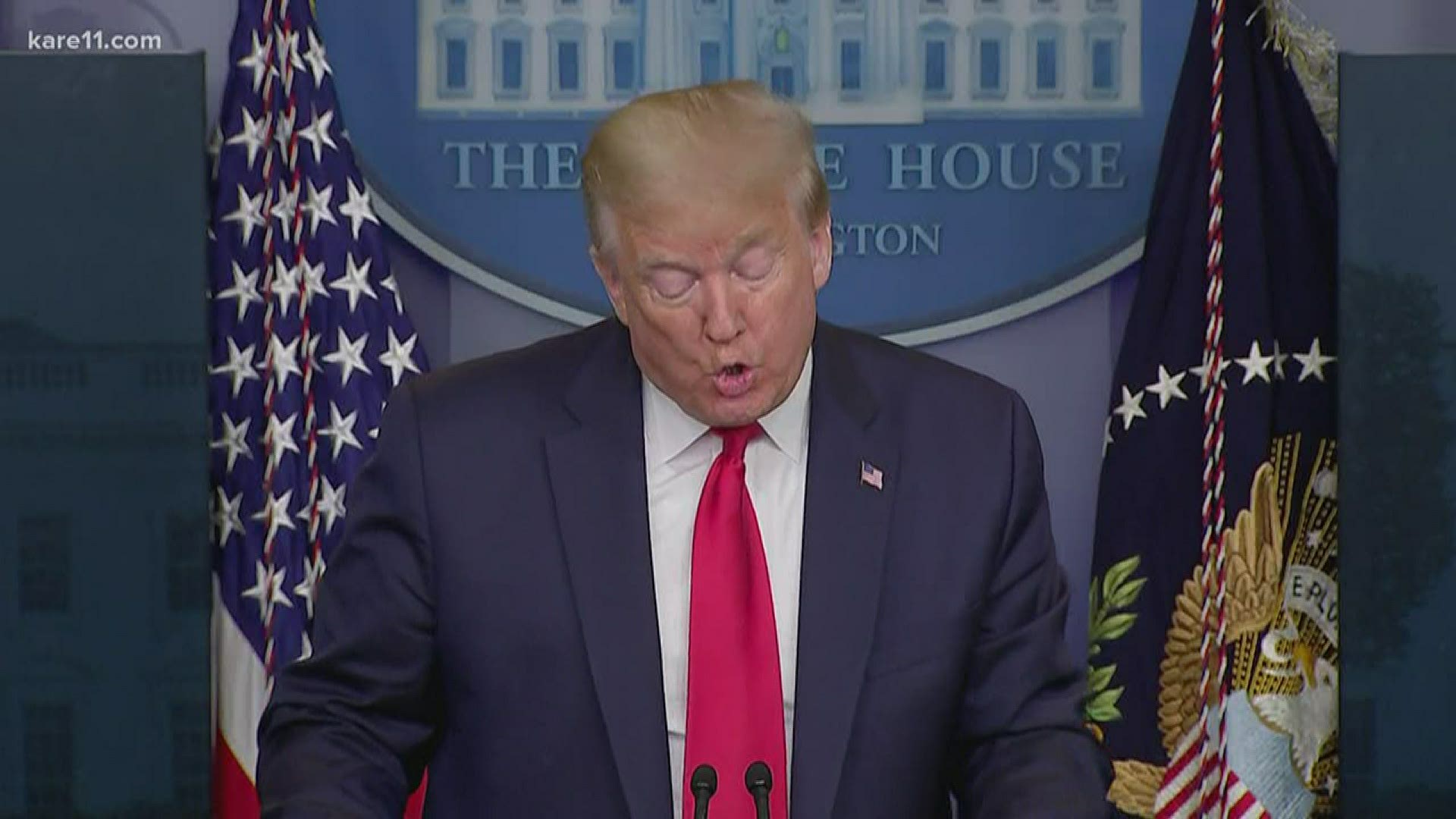 WASHINGTON, D.C., USA — President Donald Trump on Friday labeled churches and other houses of worship as “essential" and called on governors nationwide to let them reopen this weekend even though some areas remain under coronavirus lockdown.

The president threatened to “override” governors who defy him, but it was unclear what authority he has to do so.

“Governors need to do the right thing and allow these very important essential places of faith to open right now — for this weekend," Trump said at a hastily arranged press conference at the White House. Asked what authority Trump might have to supersede governors, White House press secretary Kayleigh McEnany said she wouldn't answer a theoretical question.

Trump has been pushing for the country to reopen as he tries to reverse an economic free fall playing out months before he faces reelection. White evangelical Christians have been among the president's most loyal supporters, and the White House has been careful to attend to their concerns throughout the crisis.

Following Trump's announcement, the Centers for Disease Control and Prevention released new guidelines for communities of faith on how to safely reopen, including recommendations to limit the size of gatherings and consider holding services outdoors or in large, well-ventilated areas.

Public health agencies have generally advised people to avoid gatherings of more than 10 people and encouraged Americans to remain 6 feet (1.8 meters) away from others when possible. Some parts of the country remain under some version of remain-at-home orders.

In-person religious services have been vectors for transmission of the virus. A person who attended a Mother’s Day service at a church in Northern California that defied the governor’s closure orders later tested positive, exposing more than 180 churchgoers. And a choir practice at a church in Washington state was labeled by the CDC as an early “superspreading" event.

The late guidance added more uncertainty for several churches in Minnesota that were planning to move forward with modified services next week. Though the plans included many safeguards, they would still be in violation of Governor Tim Walz' current executive order banning in person religious services greater than 10 people in size.

On Friday, Governor Walz planned to make an announcement about those services, but scrapped the plan after the statement from the President.

“Governor Walz has had many productive conversations with faith leaders in Minnesota over the last few weeks," said press secretary Teddy Tschann. "The Governor’s top priority continues to be the health and safety of Minnesotans, and he looks forward to reviewing the new CDC guidance to better understand what this means for places of worship in Minnesota.”

Though the status of those church services remain in doubt, several leaders of other faiths and Christian denominations say they are not rushing to reopen their doors.

"The six ELCA bishops in Minnesota are in agreement about that, about waiting," said Bishop Ann Svennungsen with the Minneapolis Synod.

The ELCA is Minnesota's largest Lutheran denomination and Svennungsen says churches are being encouraged to begin planning for a safe return to worship in the church, but not too soon.

The leaders of Minnesota's Rabbinical Association's also issued a joint statement this week saying that area synagogues would also remain closed. "The four major movements of Judaism are in complete agreement that upholding guidance from state authorities, in consultation with public health experts, is paramount. The StaySafeMN guidance for religious institutions from Governor Walz and Lieutenant Governor Flanagan has the full support of our Minnesota Rabbinical Association. We will do our part to stay safe by keeping the doors to our religious institutions closed for regular activity and hope the state will continue to affirm such guidance."

Area mosques also appear to be in no rush to open. Jaylani Hussein, Executive Director of the Minnesota Council on American-Islamic Relations, wrote, "American Muslim religious scholars and community leaders have called on the Muslim community to restrict public, religious activities in the immediate future due to the ongoing pandemic. The conditions on Covid-19 have not improved. There is no cure or vaccine. Protecting people's lives and health takes priority and should not be politicized by anyone, including the president."