"Little bit nervous, little bit excited ... It's such a strange time to be moving away from home," said Jason Rutman, a freshman at the University of Minnesota. 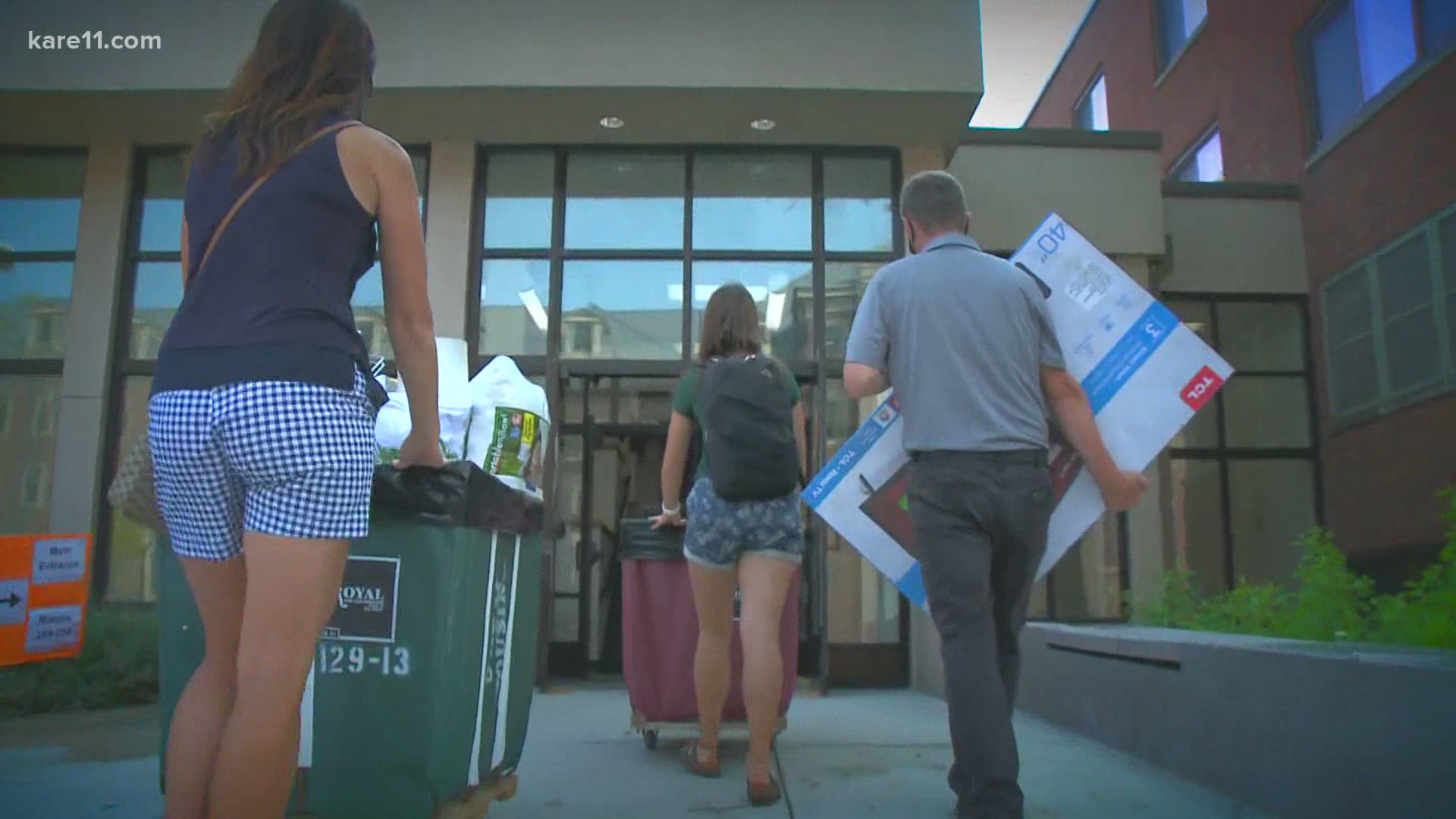 MINNEAPOLIS, Minnesota — After a two-week delay, students are starting to move into the dorms on the University of Minnesota's Twin Cities campus.

Move-in will take place Sept. 15-20 and has changed significantly due to COVID-19.

"It's kind of surreal that it's actually happening," said Olivia Starkey, a freshman from Mankato.

Tuesday, Starkey moved into Frontier Hall with the help of her parents.

"It's actually calmer. When we did it with our older daughter everybody came at once. So it was a lot, but today it's easy," said Michelle Starkey, Olivia's mother.

Undergraduate students are moving into the residence halls during scheduled one-hour appointments. No more than two helpers are allowed inside the dorms. As soon as a student has moved in, helpers need to leave. According to the U, visitors should not be on campus and buildings on campus are not open to the general public and require U Card access. 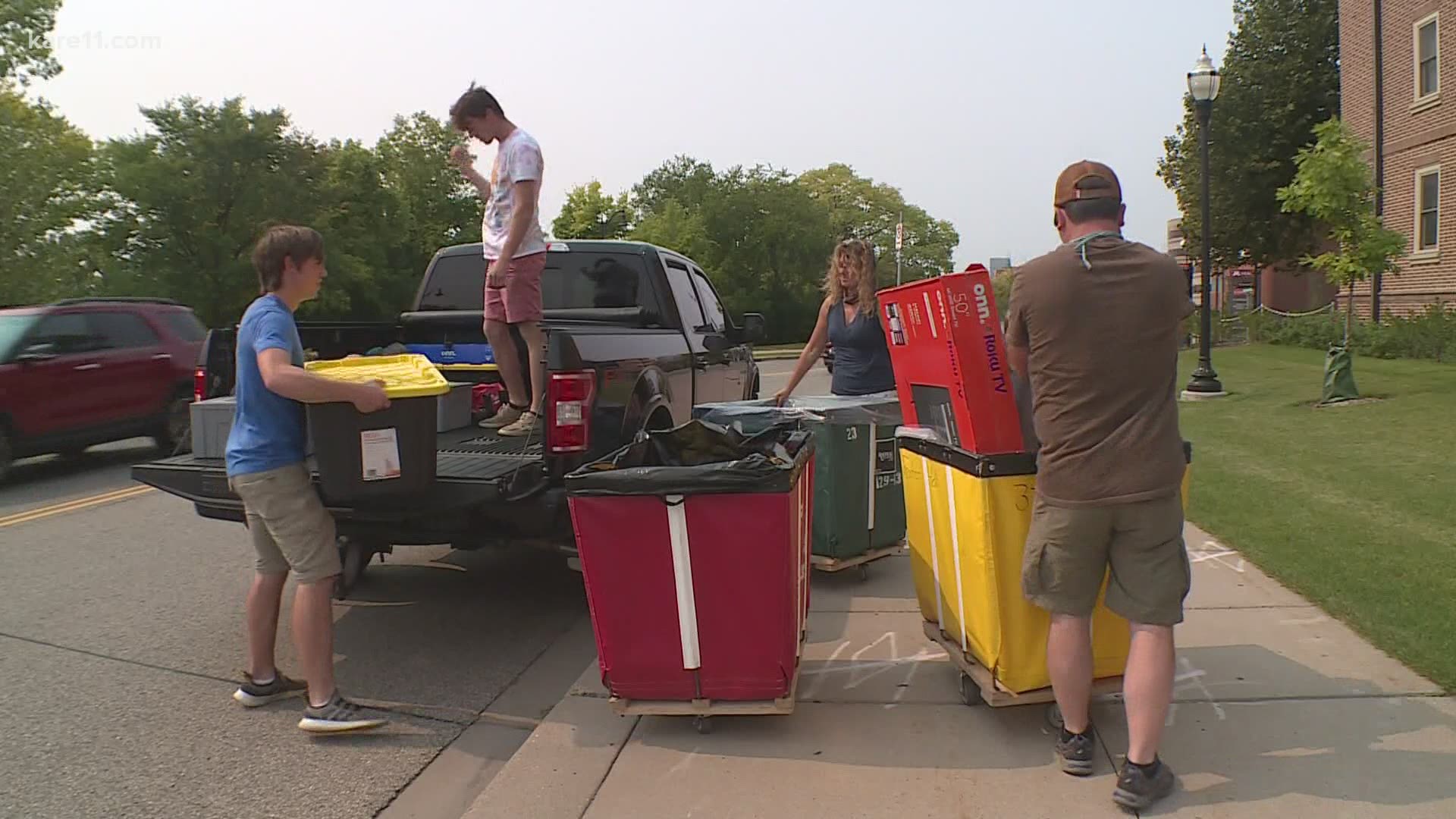 Roommates were asked to coordinate prior to move-in day, in order to avoid moving in at the same time. Students may stay in the room while their roommates' helpers are present as long as they wear a mask and social distance.

RELATED: How U of M students feel about move-in delay, online classes

"Little bit nervous, little bit excited. Obviously there is some concern just in general. It's such a strange time to be moving away from home and going to a college campus with a bunch of kids you don't know. But overall I think it'll be a great experience," said Jason Rutman, a freshman who will be living in Pioneer Hall.

Rutman's roommate, Zachary Blonz, added, "I'm glad we have to wear masks inside the building and the guest limits are really great."

Move-in marks the beginning of a 10-day period where students will live and learn mostly within their residence halls with some exceptions. It's part of Step One of the U's Maroon and Gold Sunrise Plan. If all goes well, the next steps increase access about every two weeks.

"I think what's going to be the defining factor here though is a lot of the fraternities are off campus and the prevention of students leaving campus for the first 10 days, at least the ones living in the residence halls, is going to be a big deterrent for parties and large get-togethers that would otherwise be unsafe," Blonz said.

COVID concerns come at a time when the University of Minnesota Police Department (UMPD) has noticed an increase in crime near campus, including a rash of robberies. The most recent reported robbery occurred Tuesday near 5th Street and 21st Avenue South just after 2:40 p.m. According to UMPD, a man in his early to mid-20s wearing dark clothing used a gun and stole the victim's purse. The suspect got into a red BMW with MN plate 109WTM, driven by another man.

RELATED: Safety alert issued after robbery near U of M

According to University spokesperson Lacey Nygard, UMPD has added additional patrols and continues to monitor thousands of cameras on campus. The UMPD Community Engagement Team is also actively meeting with the campus community to provide safety tips.

"We encourage the campus community to stay alert and remain aware of their surroundings. Individuals should plan to walk in a group whenever possible or request an escort from the 624-WALK (safe walk) program. As always, if anyone feels unsafe or has witnessed a crime, we encourage them to call 911," said Nygard in an email to KARE 11.

Rutman said he's aware of the recent crime; both he and his roommate receive the SAFE-U alerts.

It's another thing students are keeping in mind while moving onto campus.

The U recommends students pack lighter and focus on essentials like a digital thermometer, cleaning supplies, reusable face coverings and hand sanitizer. You can read more in their Fall Move-In Guide.