Mall of America vaccination site prioritizing teenagers through May 1

Until Saturday, 16 and 17-year-olds are being moved to the front of the line at the mass vaccination clinic as cases rise among young people. 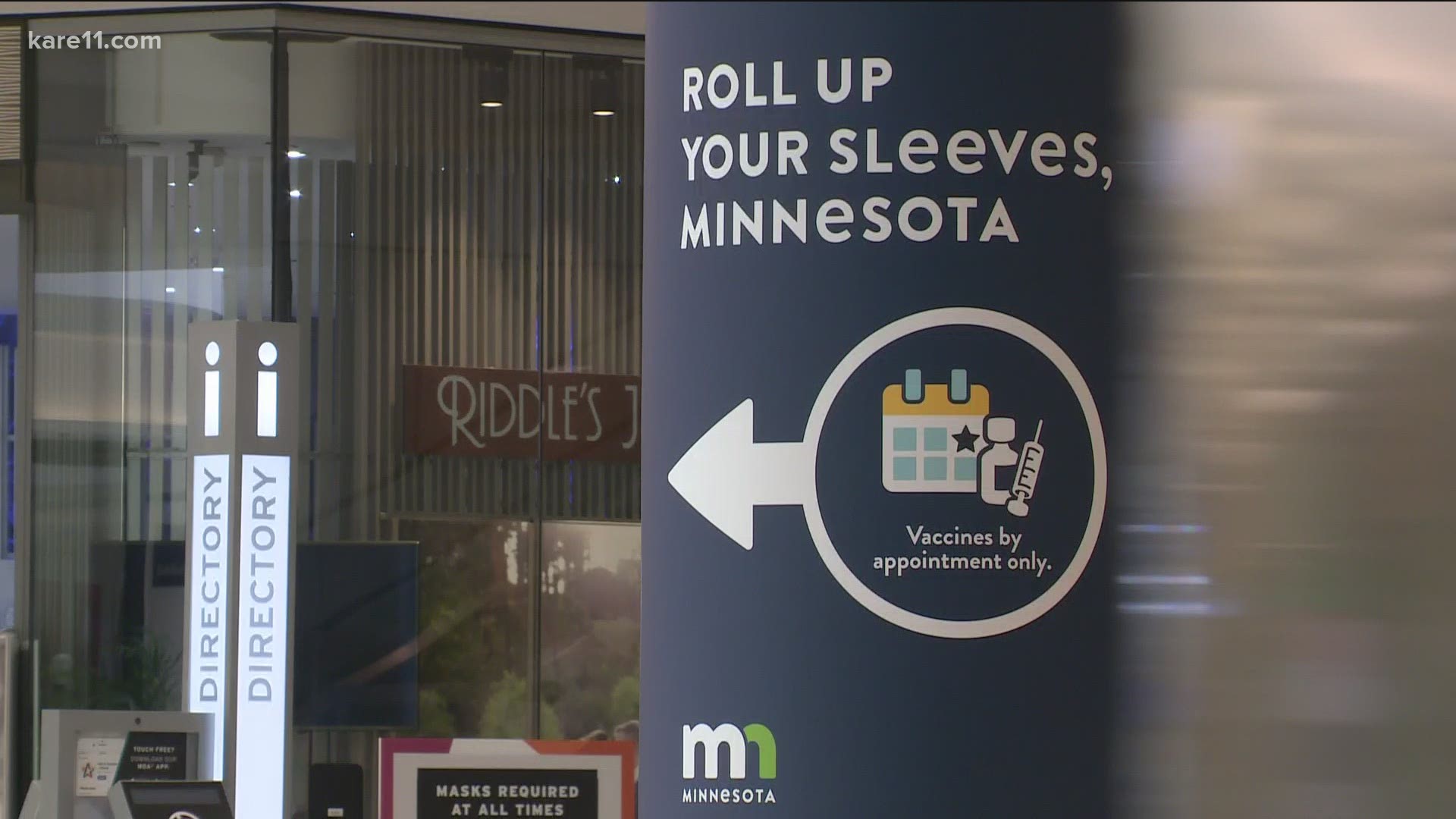 As more Minnesotans get vaccinated, health officials are now turning their attention to a specific group of people - teenagers.

The Minnesota Department of Health is moving 16 and 17-year-olds to the front of the line at the mass vaccination clinic at the Mall of America. They also say kids as young as 12 may be eligible in just a matter of weeks as well.

The clinic at the MOA has been open for about two months and a nurse administering vaccines says its completed about 90,000 vaccinations, including for 17-year-old Matthew Morales.

"I felt like my mom wanted me to get it right away and I was on the same page with her," said Morales.

MDH says students and athletes in particular continue to drive-up Covid cases. Morales says he's opting to stick with distance learning until the end of the year.

"It's hard, especially since it's been sometimes almost a year I haven't seen some of my friends," said Morales.

Pfizer is the only vaccine approved for people 16 and up. The Food and Drug Administration is now reviewing it for kids ages 12 to 15. MDH says that could get the green light by mid-May and already Children's Minnesota says its hospital would start administering it then too.

"I'm a nurse, I value vaccines, but I also live in a country where there's no stricter scrutiny of vaccinations than the CDC and the FDA," said Cathy Dichter who administers vaccines at the MOA.

She says teens tend to be more timid, so she takes more time to answer their questions.

"Is it the actual uncertainty about the emergency use vaccine, is it the actual injection needle fear or it just not knowing," Dichter said. "I ask them certain questions which helps them determine where their fear is coming from."

When it was over for Morales, he celebrated by high-fiving with his mom. He says once he's fully vaccinated the first thing he'll do is hang out with his friends again.

"It’s good for everybody to try and get back to normal," said Morales. "If this is the step we need to take, we should do it."

The state will continue to prioritize doses for teens now through Saturday, May 1 at the MOA. They can sign up for these appointments via this link specifically created for them: https://primarybio.com/r/vaxmn16

The state has been collaborating with school districts, libraries and community-based organizations to conduct targeted outreach to parents and their teen children to promote vaccination across Minnesota.