The Federal Emergency Management Agency launched a mass vaccination operation in a State Fairgrounds parking lot, with goal of 3,000 COVID vaccines per day. 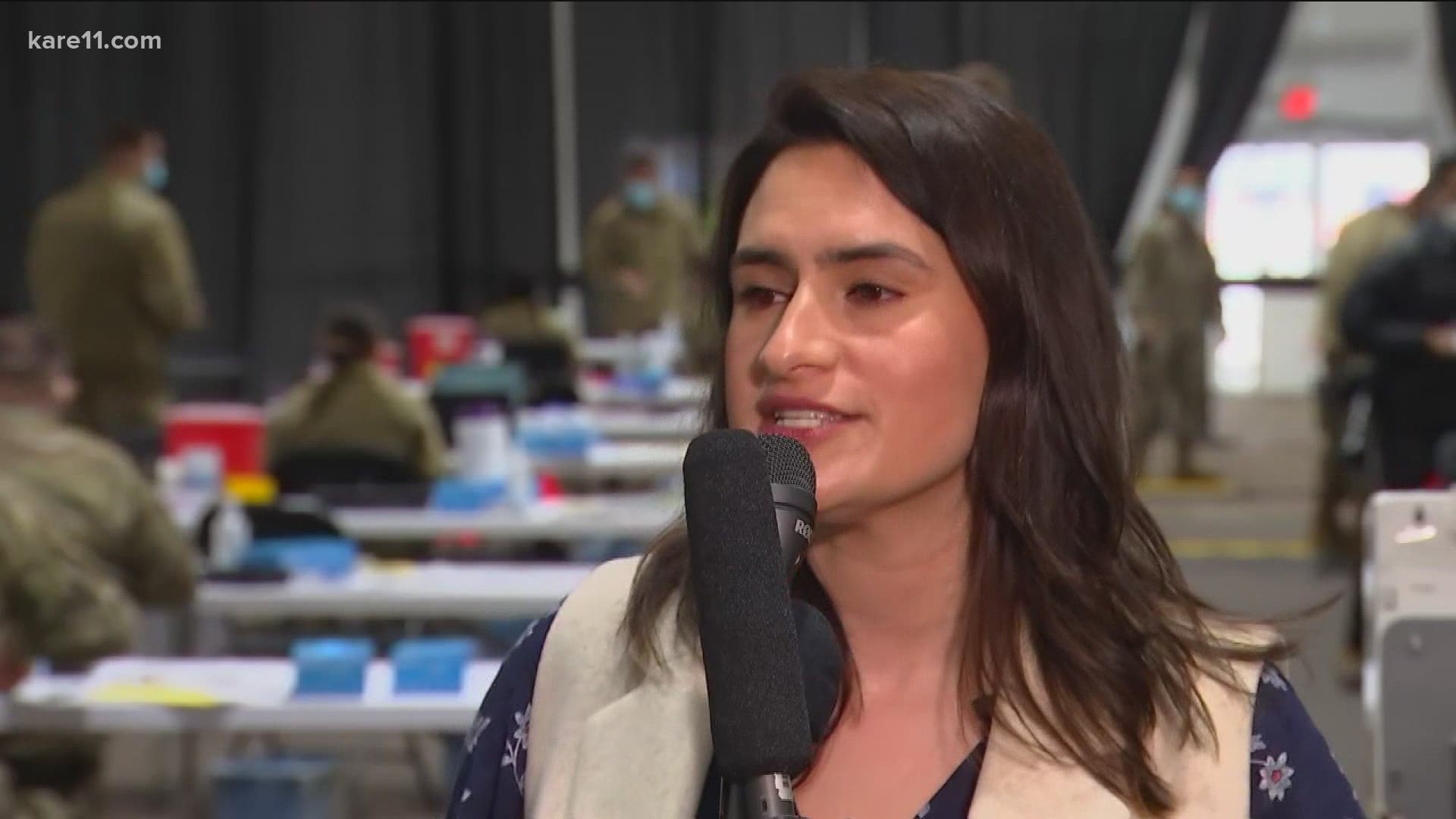 FALCON HEIGHTS, Minn. — Hope comes in all shapes and sizes. The sign of hope along Como Avenue next to the State Fairgrounds is a huge white tent.

"The battle against this virus has made us all weary, but there is hope," Kevin Sly, the acting director of FEMA Region 5, told reporters during a press tour.

"Hope that we can very soon put this pandemic behind us and move forward. It is our top priority to increase vaccine access to Minnesotans who have been, and continue to be, especially vulnerable to the ravages of this virus."

The aim is to provide 2,000 Pfizer shots daily at the site, plus 1,000 shots per day in mobile vaccination units that will be deployed as part of the operation.

The vaccinations are by appointment only, and the first step to getting on the list is to use the Minnesota Department of Health's Vaccine Connector tool online.

"I'm amazed by the work by local public health administrators, by FEMA, by the National Guard and by everyone that has stepped up into this moment, to make it work," Lt. Gov. Peggy Flanagan remarked.

She said the State Fair site is strategically located for access by roads and public transportation. It's being staffed primarily by the US Dept. of Defense -- specifically 130 military service members normally based in Washington state.

The federal government is footing 100% of the bill, and the vaccine doses being administered in the FEMA operation won't count against Minnesota's normal weekly allotment of vaccines.

"Mobile operations are also being provided to the state above and beyond the regular allocation and will not affect the ongoing vaccine distribution efforts in Minnesota," FEMA's Sly explained.

Sly said priority is being given to people who are part of medically underserved populations or live in underserved zip codes, as measured by the CDC. The CDC provides an online interactive map of the social vulnerability index here.

Health Commissioner Jan Malcolm said Minnesota is complying with the CDC's temporary pause on the Johnson & Johnson vaccination, until researchers can further study severe blood clotting that occurred in six patients out of an estimated 7 million nationwide who've received the J & J shot.

"This is an extremely rare occurrence and the symptoms that we've talked about are a severe headache, severe abdominal pain, severe leg pain, shortness of breath developing within three weeks of the shot," Malcolm explained.

"Out of an abundance of caution, if you experience any of these it's worth a call to your health care provider."

She said the fact the popular vaccine has been placed on pause shouldn't be cause for alarm, but rather proof that the follow-up reporting system is working as designed.

"This is the way the process is supposed to work. When there are safety signals, even when they are very rare, they should be checked out."

You'll recall both Commissioner Malcolm and Governor Walz received the Johnson & Johnson vaccination, which requires only one shot for full inoculation against the COVID-19 virus. They haven't experienced any severe side effects yet and the same goes for the other 184,000 Minnesotans who received it.

"As it stands right now your chance of dying from COVID is 1 in 560, while your chance of having this reaction from this vaccine is one in a million," Gov. Walz told reporters.

Malcom and Gov. Tim Walz said they expect the J & J pause to last only a few days. They said those who already booked J & J appointments should be hearing from their healthcare providers.