Health officials say testing is key to identify any cases and take appropriate steps before an outbreak happens. 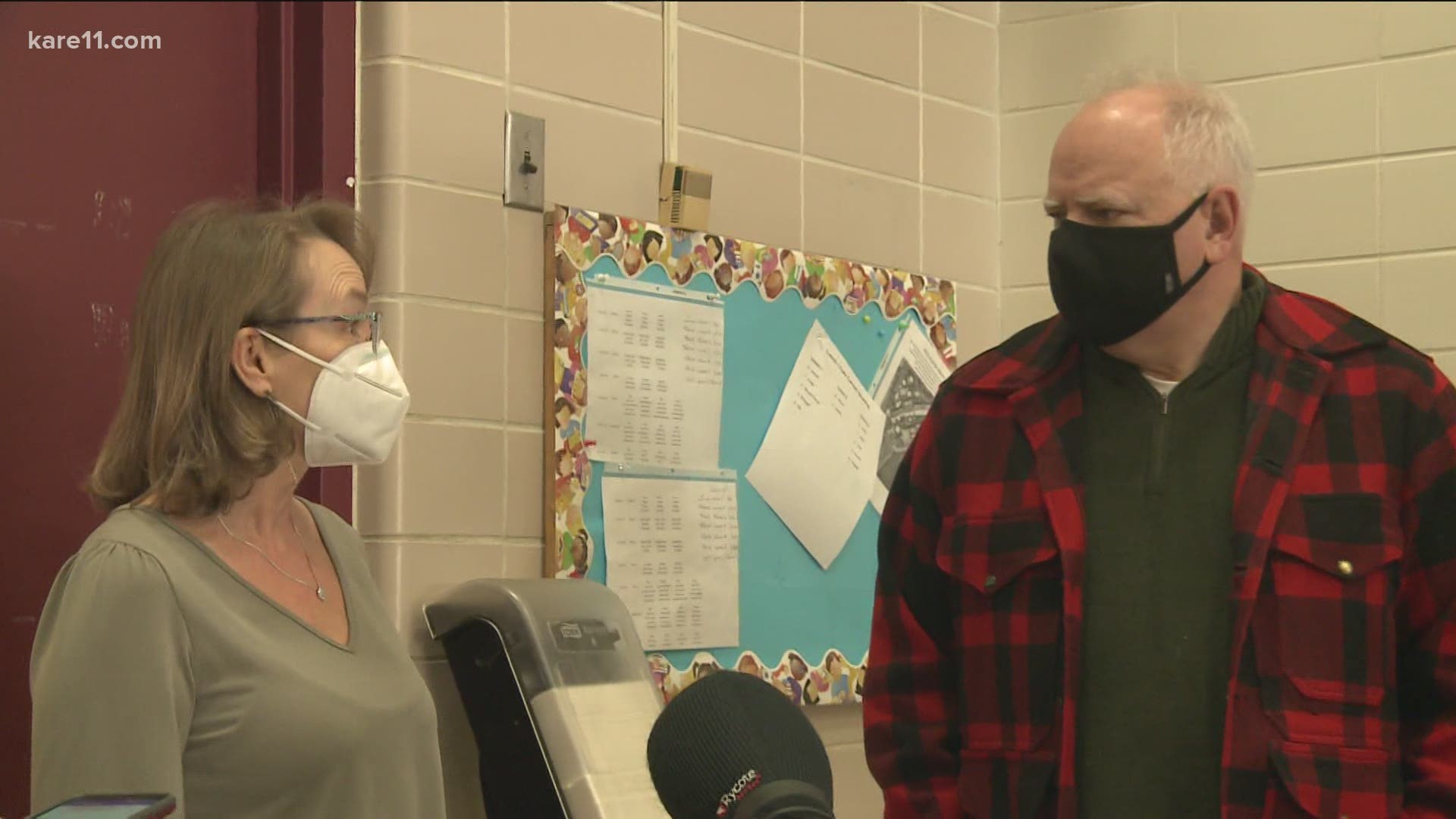 ROSEVILLE, Minn. — Gov. Tim Walz is highlighting Minnesota's efforts to test educators for COVID-19 as a path to getting kids back in school.

Walz visited a K-8 school in Roseville on Friday to speak to the media about what he calls the "first-in-the-nation educator testing program."

Roseville's Parkview Center school officials say that the testing program has been so successful that all of their students in pre-K through 8th grade will be back in class by March 15 - though K through 4th grade classes have already been back.

The governor said in a news release this week that the program is a "key tool for getting students safely back in the classroom."

Governor Walz and school officials showed off the on-site testing area that happens every two weeks in its cafeteria.

The school nurse, Deb Legan, sets up stations for people to use - from bus drivers to food service workers to teachers. After providing a saliva sample, it's mailed directly from the school with results in about 48 hours.

Walz announced in December that the state would provide training and saliva test kits so that all schools who have any in-person or hybrid learning can offer on-site testing to their staff members who have contact with students. Walz said at the time that while K-12 teachers and staff are not required to be tested, the state is requiring schools to offer the testing every other week. The program began Jan. 4.

On Friday, Walz's office announced that more than 96% of school districts have signed up to participate, and on top of that, 41% of nonpublic schools and two out of four tribal schools. The rate of transmission found among educators is currently at 0.37%.

"It's my expectation with our testing ability and with our vaccination focus that Minnesota can probably lead the nation in terms of in person learning," said Gov. Walz.

The program works by giving each school a designated day every two weeks to conduct testing. Saliva PCR testing kits are delivered to the school district, and trained COVID-19 coordinators oversee the testing.

"Really what has made things work is extraordinary teamwork," said the Roseville school COVID coordinator and lead nurse. "When we were tasked with starting our saliva clinics, it's like, OK we can do this but it's a whole new thing to learn."

She said 265 staff have had saliva testing at this point, through two bi-weekly testing clinics. The next one will be Tuesday.

"The goal, of course, is to find anyone who is asymptomatic and make sure they are not coming into the building," she said. "We've been building it as we've been doing it, and we're getting better all the time."

The Governor said Minnesota is the eighth state in the country to start vaccinating its teachers - mitigation efforts principal Kristen Smith Olson says helps ease the fears of some teachers who haven't gone back to work yet in a pandemic.

"They are so excited to have kids at school that, once you have your classroom in front of you, that fear goes away," she said. "But yeah, there was fear in the fall, for sure."

She said people didn't know what in-person learning would look like for them, their students or the school community's families.

"Those who have not been back in person yet are nervous, but they're watching their colleagues do it every single day and walking out the door exhausted, but with smiles on their faces."

As of Feb. 11, 85% of K-8 classes in Minnesota are doing some kind of in-person learning, and only 15% are in full distance learning, according to Walz.

"Our goal here in Minnesota is to get 100% of our kids back in school as quickly as possible," Walz said at Friday's news conference.

He maintained that testing is a "key tool" in doing that.

Walz said there will not be a deadline in Minnesota for when every student has to be back in school.

"If the local folks don't feel that that's safe to do that, then we'll continue to try to do what we can to mitigate that," he said.

The Minnesota Department of Health (MDH) has also urged young people ages 12-25 to get proactively tested regularly if they're returning to school, sports or other activities.

The CDC is expected to release new guidance on schools on Friday.

Walz said he believes other states that haven't implemented regular testing for school staff will have to do that to be successful.

"It's the only real way that you can stop one of these outbreaks from happening, and give the teachers the confidence they need to be in the building," he said.

In September 2020, the state of Minnesota also announced that it would begin offering free COVID-19 saliva tests to teachers, school staff and child care providers.

At the end of this week, Minnesota will have vaccinated 45,610 educators, school staff and child care workers as part of a pilot program. In January, the state guidelines expanded to make those groups eligible, and a mass vaccination event was held in St. Paul. Walz said many more vaccines have been administered to educators through local public health, pharmacies and vaccine clinics.