EpiPen competitor out in 2017 at ‘very, very low' cost

Allergy sufferers will have at least one more option to treat life-threatening.allergic reactions in the first half of 2017, but it's unclear how the price will compare to the EpiPen or its upcoming generic version. 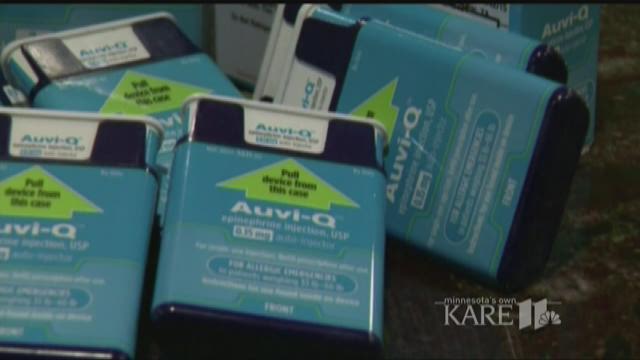 Allergy sufferers will have at least one more option to treat life-threatening.allergic reactions in the first half of 2017, but it's unclear how the price will compare to the EpiPen or its upcoming generic version.

Kaleo, which makes the Auvi-Q, will reintroduce the epinephrine auto-injector at a "very, very low" cost to patients, said Kaleo CEO Spencer Williamson. Mylan Specialty, the maker of EpiPen, came under fire from members of Congress and parents beginning in August for its large price increases.

It's been a long road to EpiPen competition.

Drugmaker Sanofi, which previously licensed the Auvi-Q from Kaleo, voluntarily recalled all of the injectors late last year amid concerns about incorrect dosing. Sanofi later sold the rights back to Kaleo, which says it fixed the problem and invested in new technology and quality systems to boost reliability.

In March, the Food and Drug Administration rejected an application by Teva Pharmaceuticals to produce a generic version of the EpiPen, citing "certain major deficiencies."

Impax Labs has a generic version of the EpiPen that can be substituted for EpiPens in 21 states. Last month, Mylan CEO Heather Bresch told a House panel that the company would introduce its own generic of its brand name product.

Mylan Inc. CEO Heather Bresch holds up a 2-pack of EpiPen as she testifies during a hearing before the House Oversight and Government Reform Committee September 21, 2016 on Capitol Hill in Washington, DC.&nbsp;

"Mylan is getting a return on their marketing investments," said Josh Gray, Athenahealth's vice president of research.

But the share of prescriptions for alternatives to EpiPens were also up last month, Athenahealth reported.

Epinephrine auto injectors are used to treat life-threatening allergic reactions, including anaphylaxis, which can have symptoms including shortness of breath, rashes and nausea.

Kaleo is meeting with drug wholesalers, pharmacy benefit managers (PBMs), and insurers in hopes of getting the price paid by consumers for the Auvi-Q as low as possible, Williamson said.

The move towards high deductible insurance plans led many parents to struggle more with Mylan's price increases over the past two years. When insurers and employers cover more of the costs of high-priced drugs through low deductibles and co-payments, premiums go up for everyone, drug pricing experts say.

Williamson downplayed those concerns in an interview Tuesday.

"What we believe is more important is the price to the patient," said Williamson.

James Baker, an allergy doctor who is CEO of the patient group Food Allergy Research & Education, said that while the Auvi-Q was originally introduced at a higher price than the EpiPen, its smaller size made it especially popular with young people. Teen boys in particular wearied of carrying around the recommended two full sized auto injectors around at all times, he says.

Eric Edwards, a physician who invented the Auvi-Q with his twin brother, Evan, knows that from personal experience. Both brothers had multiple food allergies from an early age and Eric is now a parent of children with severe allergies.

Eric acknowledged Kaleo has a big challenge ahead catching up with Mylan when it comes to product awareness.

When it comes to schools, "it's critical they know another option is out there and coming," says Edwards.."For us, it's really important having level playing field."

Kaleo says its "industry-first features" include a voice prompt system that gives users step-by-step instructions and a needle that automatically retracts to prevent injuries.

While Baker says such innovation is important, price and availability remain challenges.

"We're very pleased our patients will have more choices for epinephrine auto injectors, but access remains a major issue," says Baker. "It will be interesting to see whether most health plans offer a choice."

Kaleo will provide updates on Auvi-Q's return to the market to consumers who register online at www.auvi-q.com.

She hopes the expanded market will lower prices and cause a further expansion of competition.

"I think it’s very exciting for the food allergy community. I think in general we’re looking to have a choice in the marketplace of what device you prefer," said Beltaos.

Dr. Stephen Schondelmeyer, at the College of Pharmacy at the University of Minnesota says the news should have parents feeling "excitedly cautious."

"Two creates more competition than one, but in the generic market normally what we see is it takes five or six to truly create economic competition that we’re used to in other markets," said Dr. Schondelmeyer.

He looked up past pricing for Auvi-Q and found it cost about $600 for two injectors before it was pulled from the market. He says it costs companies about $100 to make the device.

"I think we have to watch and expect the market to continue to work like an economically competitive market and we’ll know when we see the price," said Dr. Schondelmeyer.