Fetal surgery for babies with spina bifida at Children's 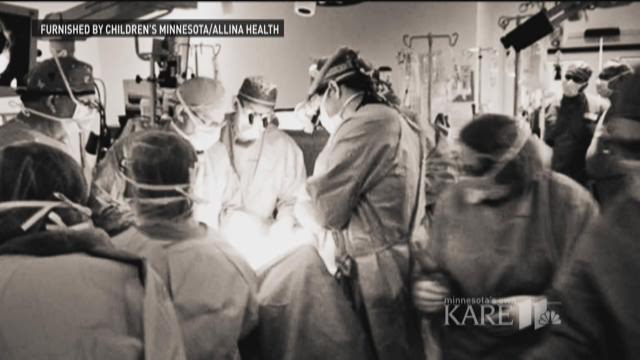 MINNEAPOLIS - Children’s Minnesota and Allina Health announced Tuesday the launch of open fetal surgery for babies with spina bifida. The breakthrough surgery repairs birth defects inside the womb, and will be among fewer than a dozen centers in the world performing the procedure.

The Midwest Fetal Care Center inside Children’s Hospital in Minneapolis has been quietly pioneering the program, performing six open fetal surgeries on babies born with spina bifida in the past year.

Baby Clara Carlin was born at a 36-week C-section.

The condition, where the spinal column doesn’t fully close, can cause traumatic injury to the spinal cord, a buildup of fluid in the brain, and other significant physical and neurological damage. Approximately, 1,500 babies in the United States are born with spina bifida each year.

In Minneapolis, a vast team of fetal surgeons, neurosurgeons, maternal fetal medicine specialists came together to perform the first open fetal surgery nearly a year ago on Nicole Carlin, of Coon Rapids, who was 25 weeks pregnant with her baby girl.

“So that whole day I was on edge and nervous and she finally told me we were 1 in 33 chance of neural tube defect,” said Carlin. “I couldn’t sit there for the next four months and not do anything and so I needed to do everything in my power if possible.”

The determination to explore all options for her unborn baby girl led Carlin to the Midwest Fetal Care Center where doctors told her she was a good candidate for fetal surgery.

Before this possibility, the Carlins would have needed to travel more than 1,000 miles from Minnesota for fetal surgery, and stay for months until the baby’s birth. Minnesota patients are often referred to Philadelphia and Houston, but doctors believed Carlin was a good candidate to undergo the first surgery at the Midwest Fetal Care Center because she and her husband needed to stay in Minnesota to also care for their three-year-old son.

Children&#39;s Hospitals and Clinics of Minnesota.

“I told myself if everything fell into place, then that was our sign we needed to it. It’s a hard decision because you have to have the right support team to have it, from the time you have it until the baby is born, it’s very rare people can actually make it back to work,” said Carlin. “I was an emotional wreck and I think I got all my tears out, because they said when I walked in there on the day of the surgery, they never seen somebody so calm and cool.”

In open fetal surgery, performed before 26 weeks gestation, the fetus is exposed in the womb and sometimes partially removed to allow for corrective surgery. In Carlin’s case, doctors made a small surgical opening, guided by ultrasound, to reveal the spinal cord defect. Surgeons delicately closed the exposed area of the spinal cord.

“We just expose the back of the baby, leaving the rest of the baby floating sort of like baby in a bathtub in the uterus. The spine defect is closed in multiple layers to create a water tight closure, and then once that closure and portion of the procedure is done, we put baby all the way back in,” said Joseph Lillegard, MD, PhD, pediatric surgeon and research director at the Midwest Fetal Care Center.

Before fetal surgery was available, families often wrestled with two options, to either terminate the pregnancy or repair the spinal cord defect after birth. But in 2011, a New England Journal of Medicine study showed that repairing spina bifida before the babies were born in utero actually had better outcomes than repairing spina bifida after the baby was born.

Approximately, 1,500 babies in the United States are born with&nbsp;spina&nbsp;bifida each year.

“Better IQ scores for your baby, better movement for your baby, fewer complications for your baby, so being able to tell that to a family, meeting that unmet need in our community, offering that therapy, that’s a huge win for us and for our community,” said Brad Feltis, MD, PhD, surgery director and pediatric surgeon at the Midwest Fetal Care Center. “Frankly, it’s humbling, it’s a privilege.”

Carlin and her baby tolerated the two-hour procedure well. Carlin recovered at home for the next several months, and baby Clara was born at a 36-week C-section. Now at 9 months old, Clara is surpassing milestones. She doesn’t need a shunt to drain excess fluid in the brain, which is sometimes needed in young children with spina bifida.

“Open fetal surgery enables us to potentially save the life of the fetus or provide long-term health benefits that couldn’t be achieved if we waited until after the baby was born,” said Dr. Lillegard. “It’s too early to say where Clara’s trajectory will take her, but right now we are extremely happy with where she is at.”

At home, Clara is starting to stand and is meeting milestones every month.

“She amazes me every single day, she seriously does, especially now she’s starting to roll over, and starting to talk, she says ‘Dada’ all the time she sits up amazingly. She’s actually right on track and she’s just as smart as her brother. She actually said ‘Dada’ before he did,” said Carlin.

Carlin wants to encourage other parents wrestling with the same spina bifida diagnosis to consider open fetal surgery. The Midwest Fetal Care Center is the only hospital to offer it in the five-state region.

“It was the doctors that did it. My prayer – I’m really big on prayer – that did a little bit too,” said Carlin. “It was one of the hardest things I’ll ever do in my life, but it was worth every second seeing her and holding her.”

The Midwest Fetal Care Center hopes to make open fetal surgery a more routine option in the future, and will continue to track spina bifida patients like Clara into adulthood.

“It is really one of the last great frontiers in not only surgery but medicine, we are very close to doing more and more procedures in utero on the developing baby, mechanically or surgically, or even genetically, being able to deliver missing genes to a baby,” said Dr. Feltis.