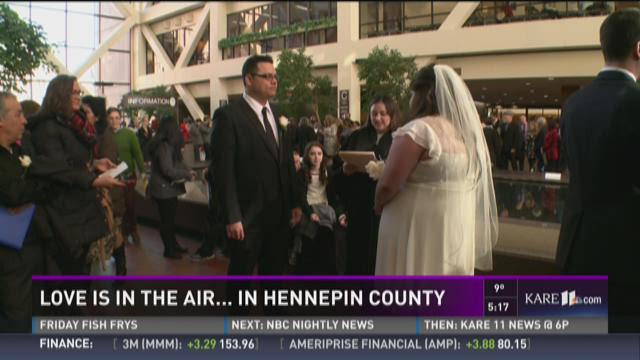 Friday afternoon, Fourth Judicial District judges united more than 30 couples in matrimony for free; according to the Honorable William Koch, it typically cost $100-$150.

The tradition started four years ago. Since then, more than 100 couples have tied the knot at the event which always takes place around Valentine's Day.

"It's really nice. It's really moving to just have everybody here and celebrating at the same time. And it's really great to have this bright part of the day when so much of what we do as judges is not happy," Judge Carolina Lamas said.

"We figured we'd be part of something as far as the city just so we can have something really memorable," Acuna said.

Acuna and Vega plan to have a larger wedding in the future.

Julie and Patrick Dalton, who met at the University of Minnesota, also got married at noon.

The couple's main ceremony will take place in Puerto Rico in three weeks.

Several of the judges also lent their musical talents for the wedding ceremonies.