Ica wrote recipes on the back of ammunition packing slips. Kept them for years. Now her daughter has written a book about them. 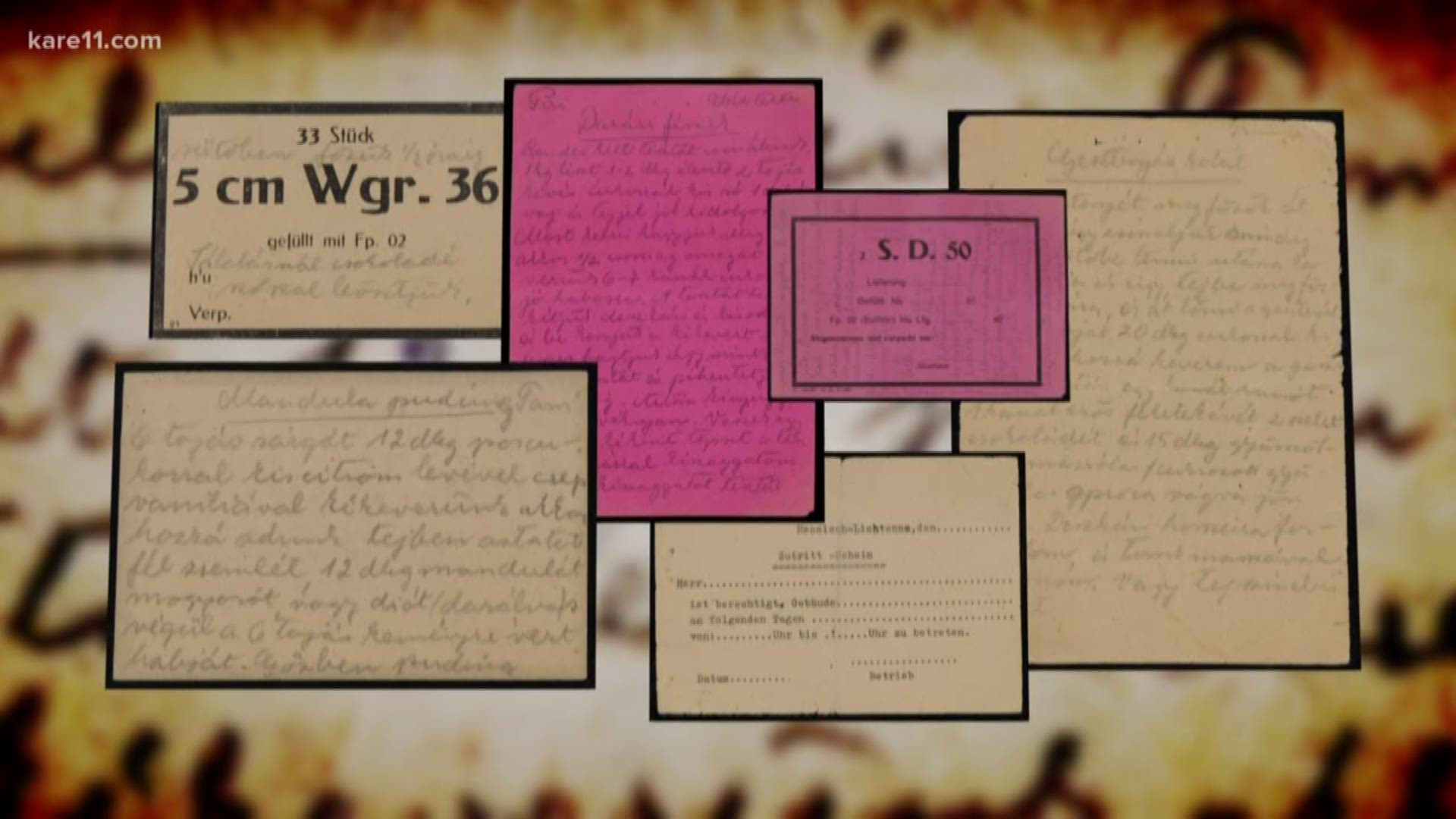 ST. LOUIS PARK, Minn. — Thanksgiving is our time to be thankful for family, friends and food on our table.

Eva Moreimi will be doing the same tomorrow. With her turkey, homemade stuffing, cranberry sauce and desserts. No Thanksgiving meal is complete without Eva's jam-filled Linzer cookies and luxuriously layered Gerbeaud slices.

"My mother made it very well," Moreimi said, pointing to the Gerbeaud. "It also has layers of walnuts and layers of jam and then chocolate on the top."

The Linzer cookies and the Gerbeaud slices are just like how Eva's mother, Ica, used to make them. Eva said she remembers how her mother used to go through her recipe cards to decide what to bake for the week.

"First she was in Auschwitz where they only talked about food because they were starving," Moreimi said, referring to her mother and the other women held captive. "People were dying around them. After a few weeks in Auschwitz, they were put on trains with many other women and taken to Germany to a sub camp of Buchenwald, called Hessisch Lichtenan, where they worked in an ammunition factory."

At the factory, Eva said her mother was assigned to be the translator and messenger within its walls. Because of this role, Eva explained that her mother was able to move around the factory relatively freely. When she could, Eva said Ica gathered scraps of paper and found a pencil on the ground in an effort to start writing down recipes that other women talked about.

"She pilfered these papers and in the evenings would write recipes that women shared among each other," she said. "Because they were hungry and talked about food all the time."

The papers that Ica was able to gather were ammunition packing slips, with descriptions of what they were and how many there were. The "recipe cards" had identifiers were weapons of mass destruction on one side.

"On the other side, my mother wrote a recipe, fig and nut slices," Eva said, pointing to one of the photocopied cards. "Given to her by a Hungarian lady."

Eva explained that her mother Ica took care of those cards, taking them everywhere she went. Eva said her mother even ran into a burning building to rescue them at one point. The cards traveled with her mother from Europe to the United States and eventually made their way to Eva.

Eva said there were over 600 recipes. She explained that for the women who put them together, it was a way of survival and a way of reminding themselves that one day, when they're free, they'll get to eat again.

"These women in the most inhuman conditions, they tried to remain dignified, civilized and hopeful," she said. "This was my mother's way of indirectly resisting the Nazis. This was her indirect resistance and she had to be careful and hide those recipes."

Many of the women who contributed to the recipe cards also didn't make it, according to Eva. Eva said she partly wanted to write her book, 'Hidden Recipes' so the voices of those who were killed could also be heard.

"The memory of them and my extended family and the kind women-- all those Hungarian women-- who shared their recipes with my mom, that these memories will live on," Eva said. "And those six million Jews who had no voice. That the second generation, the third generation and on and on that we will be their voice."

Eva also said it was important for her to tell the story of her parents who immigrated to the United States.

"Recently, I see what's happening round us, there is so much hatred, racism, anti-Semitism is on the rise, and it's very troubling to me," Eva said. "And I decided that I must tell my parents story and just show what hatred can do, where it can lead."

Up until 2017, Eva said her mother's recipes sat in her home. That's when she decided after talking with her family that the cards couldn't stay in the dark. So she decided to donate them to the United States Holocaust Memorial Museum in Washington D.C., but not before memorializing a few of Ica's recipes in her book.

"It was hard for me to part with it," Eva said, referring to the recipe cards. "I talked to my husband, my three children. But we thought about it and we decided we can't keep it inside our closet. It's time to donate to tell the story. The story must be told, it's important."

'Hidden Recipes' is not a cook book. It's a story of two people, their survival, their resilience and hope.

"I didn't want this book to be sad," Eva said. "I wanted it to show that after the war, when my parents met, that they strive to create life, start all over. I was born a few years after the war and they really just wanted to look ahead and make the best life to provide for me."

Eva Moreimi's book is currently available on Amazon and will soon be available at other book stores.