The problem has become so bad -- and undetected -- that Minnesota health and education officials are sending letters to administrators urging they tackle the issue before it gets even worse. 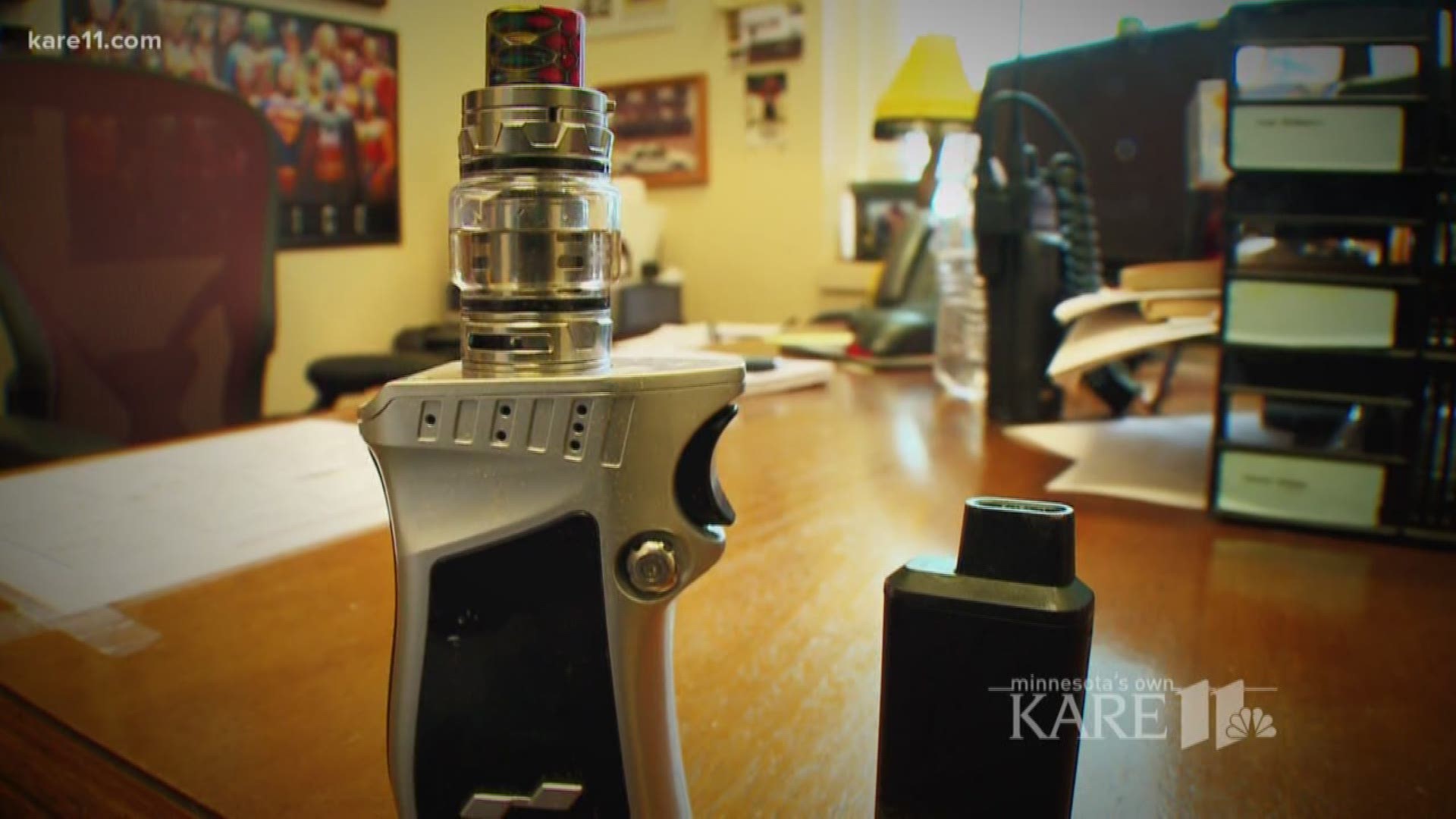 ST. PAUL, Minn. - The Minnesota Department of Health and the Department of Education have sent a rare, joint letter to school districts across the state, warning them of the dangers of e-cigarettes and vaping products. The letter explains how e-cigarettes have led to the first increase in teen tobacco use in nearly two decades and urges schools to alert parents and increase awareness (and education) about the products.

KARE 11 spoke to several Minnesota school districts, students and the Department of Health about the rising use of e-cigarettes inside schools and classrooms.

Outside Duluth's Denfeld High School, you might catch a glimpse -- or a fruit-scented whiff -- of what's behind the first increase in teen nicotine consumption in 17 years.

"I know kids that are addicted, I think, so that's not good," one student said.

But students tell us the vaping, or e-cigarette, use you see, is only the beginning.

"I see, on average, like five to ten kids do it a day in like, class, like secretly in the back of a classroom, or when the teacher's not paying attention," another student said.

Denfeld's Principal, Tonya Sconiers, said it's not a simple problem to fix.

"It has posed great challenges," she said. "We would like to think that we can recognize and uncover any and all devices that may be in our building, however, students are using vape and Juuling more than we've ever seen in the past."

Sconiers said Denfeld is trying to raise awareness of the products, with help from the American Lung Association’s Lethal Lure Campaign, and she says they’ve cracked down on, and banned, e-cigs.

Similar efforts are underway at schools across the state, several sending us photos of e-cigarettes they recently confiscated.

Credit: David Porter, KARE
Schools are working to crack down on e-cig use but the challenge comes when its usage is mostly undetected.&nbsp;

But as schools collect vaping devices and other types of e-cigarettes, they're even more concerned with the smaller devices they often miss.

"Some of the vapes that we have seen are as small as a flash drive," Sconiers said.

Credit: David Porter, KARE
Juul packets are said to have as much nicotine as an entire pack of cigarettes.&nbsp;

Juul is the brand that has come to dominate the e-cig market. They're not only small but they produce virtually no vapor or smell.

"They can basically use it in plain sight," said Laura Oliven, MN Tobacco Control manager.

Minnesota's Tobacco Control Manager says no amount of nicotine is safe for kids yet each flavored Juul "pod" contains as much nicotine as a full pack of cigarettes.

“A pod has the nicotine, the same amount of nicotine as two hundred puffs," Oliven said. “And you can imagine what that does to the brain. Electronic cigarette use and exposure to nicotine harms learning, memory, attention and kind of changes the neuropathways, which creates a lifetime susceptibility to addiction."

Minnesota's health and education departments are now sounding the alarm, after a statewide survey found e-cig use rose 50 percent in just three years.

"And keep in mind, that's a high school average," she added. "It basically reflects an explosion availability and use of these new products."

Last week the FDA announced that it is cracking down on that availability. The FDA will increase undercover enforcement at in-store and online retailers across the country and is also requesting marketing information from the company behind the Juul, to ensure it’s not being marketed to children and teens.

"I'd say, in about half of my classes kids are Juuling," a Duluth student said.

In nearby Proctor, the problem is so bad, it's even led to some modified school bathrooms.

Credit: David Porter, KARE
It&#39;s become such a problem that Proctor High School and Middle School decided to take the main doors off the bathrooms, where students are known to vape or Juul.

"Typically, when they'd hear a door open they'd put it away, so now we've taken the doors off the bathrooms," said Tim Rohweder, principal of Proctor High School and Middle School. "So they can't hear us walking in."

And those doors aren't just missing in the high school.

"I think it's probably more prevalent, at least in our school, in the seventh, eighth and ninth grade level," he said.

That's exactly what federal and state leaders are afraid of.

"For some youth, they can become addicted within weeks," Oliven said. "If we're locking in addiction patterns as early as middle school, we have an even more serious problem."

In its letter, the state is urging schools to help educate both students and parents about the rise in e-cigarette use. The health department is also pushing for new regulations on e-cigarettes, including raising the age of purchase from 18 to 21.