SAINT PAUL, Minn. - Sometimes you just need to take a deep breath. You could say that's what Humboldt High School is doing with its football program. 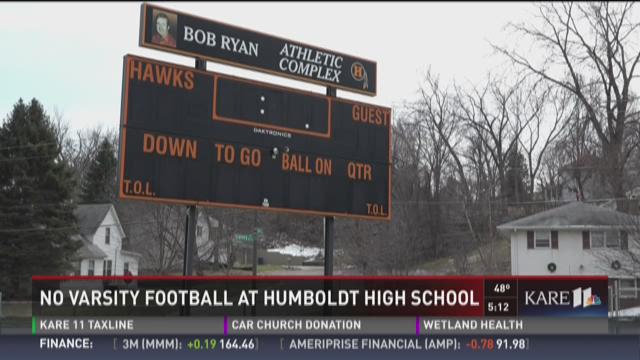 SAINT PAUL, Minn. - Sometimes you just need to take a deep breath. You could say that's what Humboldt High School is doing with its football program.

Next season the school will only field a JV football team, taking a one year break from varsity football.

Over the past two seasons, Humboldt has only won one game. Last season the team even had to forfeit a game because they didn't have enough kids healthy to play.

"We were sometimes playing some of the games last year with just 14 varsity players," Mergens says.

Mergens says he hopes the year off will stop the cycle of playing young athletes at the varsity level before they're ready. "What happens is, we get that big group of 9th graders all interested and excited at the beginning of the year and by the end of the year, because you're playing them up at that varsity level, they quit. They're frustrated they're getting beat up by bigger and stronger players, you're not winning games," he says.

New head football coach Arnulfo Flores agrees with the decision to take a year away from varsity football. "I'm looking out for our kids here at Humboldt High School, the safety of our kids. I don't believe it's right for me to put a 9th grader up against a senior. I know I wouldn't want my kid doing that," Flores says.

"It isn't that our football program is dying, I really think this is our chance to reboot our program and get it started," Mergens says.