'I Believe Her' rally at the State Capitol

Chants echoed throughout the Minnesota State Capitol Rotunda Friday as more than 100 women and men held signs, passionately sharing their stories and demanding an end to sexual harassment in government. 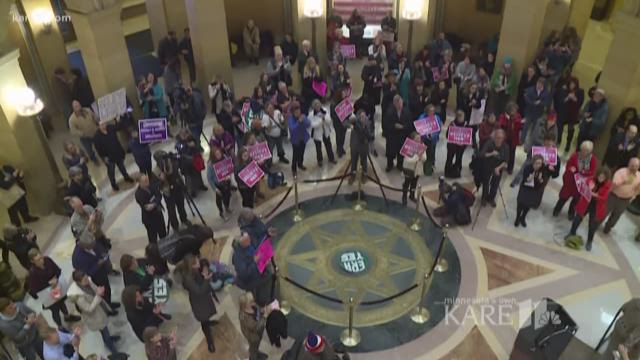 Chants echoed throughout the Minnesota State Capitol Rotunda Friday as more than 100 women and men held signs, passionately sharing their stories and demanding an end to sexual harassment in government.

"Our love is here right now together as one. And, we want to break down the walls in here that people hide behind, and they mask behind, and they use their nasty thoughts to fuse their sexual fantasies and point them out to get women," said Pastor Marea Perry.

"We are all standing here together to say, 'enough is enough.' We will not be silent anymore," said Heather Allison, the President of the Equal Rights Amendment (ERA) in Minnesota.

Today, five groups calling for equality rallied together, demanding an end to sexual harassment in our government. Since last week, at least four women have come forward, saying they were targets of sexual aggression in the Minnesota legislature.

"We demand clearly defined and executed consequences for sexual harassment," said Betty Folliard, a former state representative and the founder of the ERA.

That's why these groups are hoping to get the Equal Rights Amendment on the state ballot in 2018; to set forth a law of gender equality with legal recourse against discrimination.

"Training will only modify the behavior. It's like putting a Band-Aid on a hemorrhaging wound. The only cure to this disease is getting the Equal Rights Amendment passed in the Minnesota State Constitution and then nationally," said Allison.

The rally comes just a day after Minnesota Senator Al Franken was accused of forcibly kissing and groping Leeann Tweeden in 2006, during a USO tour of the Middle East. Senator Franken released a statement, apologizing, and asking for an ethics investigation be undertaken.

Still, at the rally, Minnesota State Auditor Rebecca Otto, who is a Democrat, called for Senator Franken to resign.