Carlos Urrutia was sentenced to five years of supervised probation after he was convicted of criminal vehicular operation from a crash in March of 2017. The cellphone video shows ICE officers taking Urrutia into custody once they exit the Ramsey County courtroom. 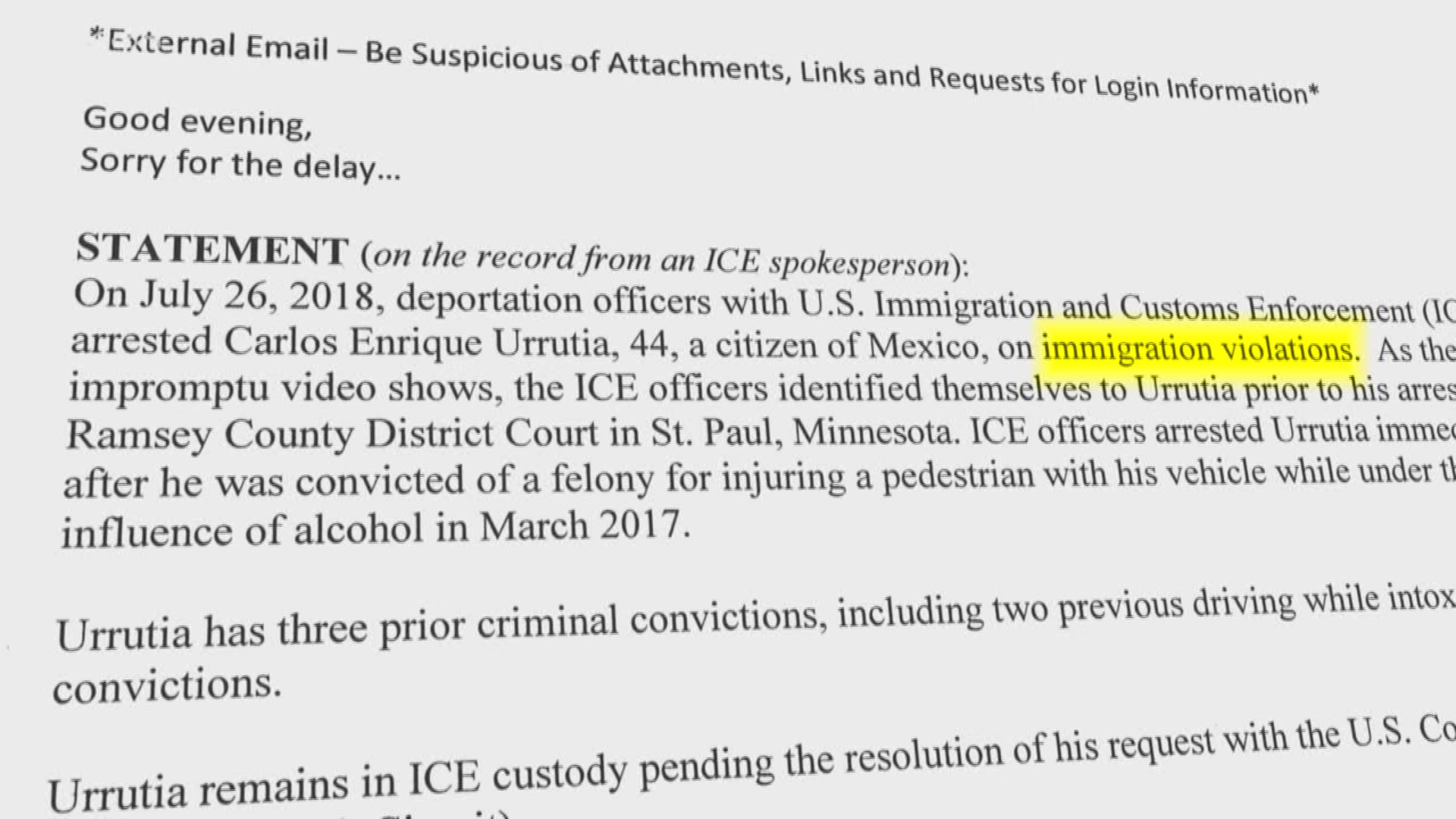 ST. PAUL, Minn. - By now you have seen the video of a man being removed from the Ramsey County courthouse by Immigrations and Customs Enforcement agents.

The questions start streaming in once the subjects in the video exit the courtroom at Ramsey County. Carlos Urrutia was sentenced to five years supervised probation for Criminal Vehicular Operation after a crash in Roseville involving a pedestrian back in March of 2017.

As soon as they start to exit the courtroom, Urrutia's friend and colleague started to film. Catalina Morales said she felt compelled to.

Morales follows the two agents and Urrutia towards the elevator. While on their way, you can hear her and other friends and family ask ICE agents questions like, "who are you?" "do you have a warrant?" "do you have identification?"

In the video, one of the officers responds.

"I don't need to prove anything," he said. "I'm affecting an arrest."

In a statement, the U.S. Immigration and Customs Enforcement said they arrested Urrutia on immigration violations. The statement reads:

STATEMENT (on the record from an ICE spokesperson):

On July 26, 2018, deportation officers with U.S. Immigration and Customs Enforcement (ICE) arrested Carlos Enrique Urrutia, 44, a citizen of Mexico, on immigration violations. As the impromptu video shows, the ICE officers identified themselves to Urrutia prior to his arrest at Ramsey County District Court in St. Paul, Minnesota. ICE officers arrested Urrutia immediately after he was convicted of a felony for injuring a pedestrian with his vehicle while under the influence of alcohol in March 2017.

Urrutia has three prior criminal convictions, including two previous driving while intoxicated convictions.

Urrutia remains in ICE custody pending the resolution of his request with the U.S. Court of Appeals (Eighth Circuit).

In performing their sworn duties, ICE officers conduct themselves in accordance with the authorities conveyed to them under federal law and the Constitution. Individuals who intervene in or seek to impede ICE officers while they are carrying out their mission recklessly endanger not only the enforcement personnel, but also the individuals targeted for arrest and potentially innocent bystanders. Those who engage in such actions run the risk of harming themselves and the very people they purport to support.

"It is an uphill battle but the immigration judge knew about the charge that Carlos was facing," attorney Graham Ojala-Barbour said. "He has taken responsibility for his actions."

Ojala-Barbour said Urrutia would have known that detention by ICE agents was a possibility if he showed up to his Ramsey county court hearing.

"He has acknowledged a lot that has been on his part," Morales said. "And yet at the same time, he is also-- we shouldn't be defined by our worst moments. He has other things. He's a great father. He is very involved in helping other people."

At this point, Ojala-Barbour said Urrutia has been granted a temporary stay of removal. He can only wait for his appeal to go through Sherburne County Jail. It's unclear how long that process will take.

Urrutia has already served seven months at the Sherburne County Jail prior to his most recent arrest. At that time, an immigration judge heard his case and granted him stay, despite knowing of his felony charge. Ojala-Barbour said it's only when the government appealed the judge's decision that he was taken back into custody again on immigration violation charges. 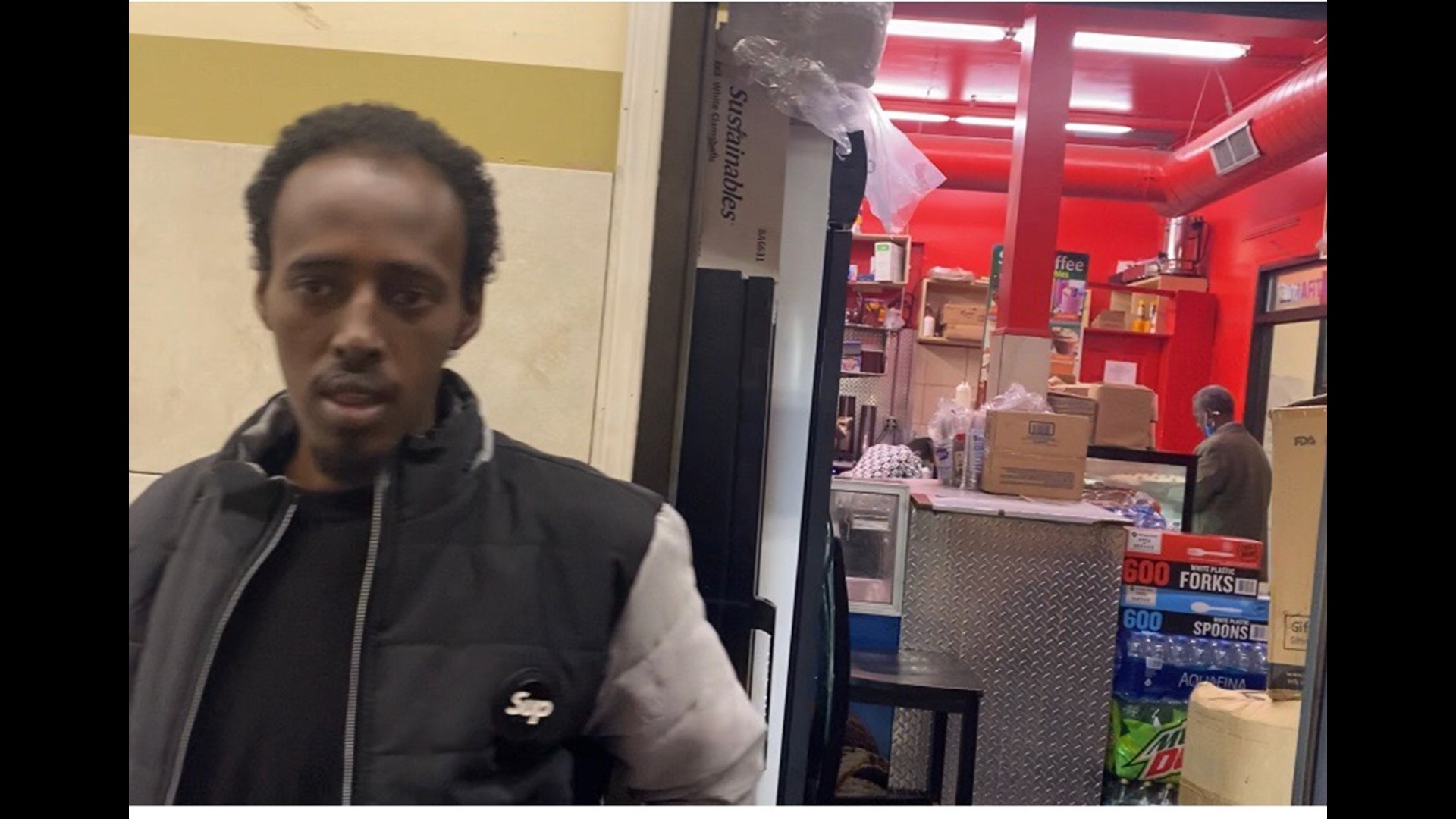