Heavy drifting on ice roads left hundreds of ice anglers stuck across Lake Mille Lacs. The snow is so deep vehicles couldn't get back to the mainland, leaving those stuck keeping a worried eye on their propane and food supplies. 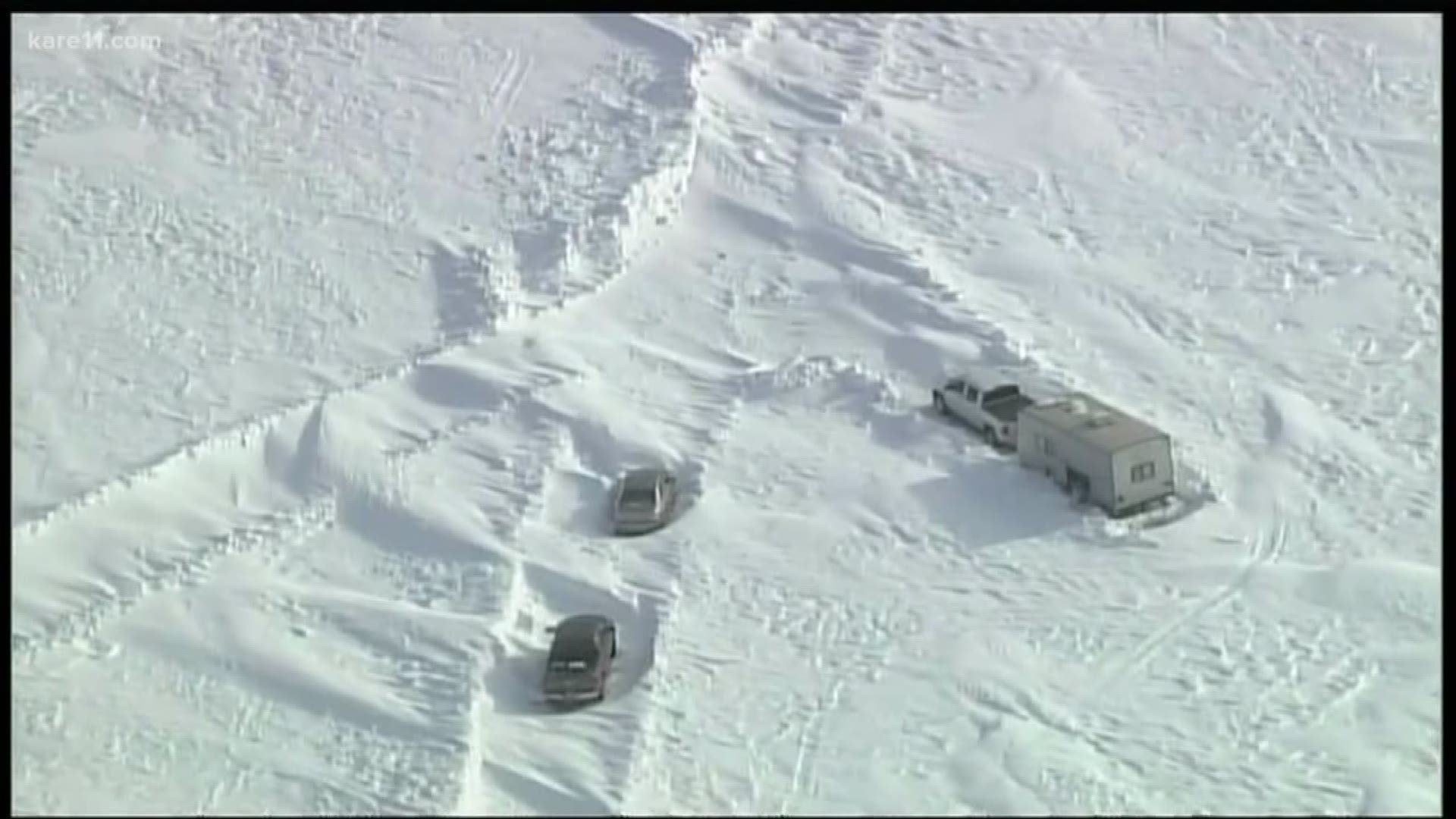 AITKIN, Minn. — Snowy, drift-covered roads are a proving a major problem for motorists across the state of Minnesota.

And the problems aren't only on dry land. Heavy drifting on ice roads left hundreds of ice anglers stuck across Lake Mille Lacs. The snow drifts were so deep vehicles could not reach the mainland, leaving those stuck keeping a worried eye on their propane and food supplies.

By Monday evening, a Department of Natural Resources spokesperson said everyone who needed to get back to shore had done so, thanks to hard-working plow crews and resort owners who helped clear paths with heavy-duty equipment.

Among those stuck were Bill Spege of Wyoming, who was stuck in an ice shack with his brother Trevor and two of their buddies. Spege arrived Saturday to chase some walleye, and hunkered down as conditions on Mille Lacs worsened into what he described as "the worst I've ever seen." The group was out of fuel for their generator so no lights or electricity, but they do have enough propane to heat the shack at least through Tuesday. 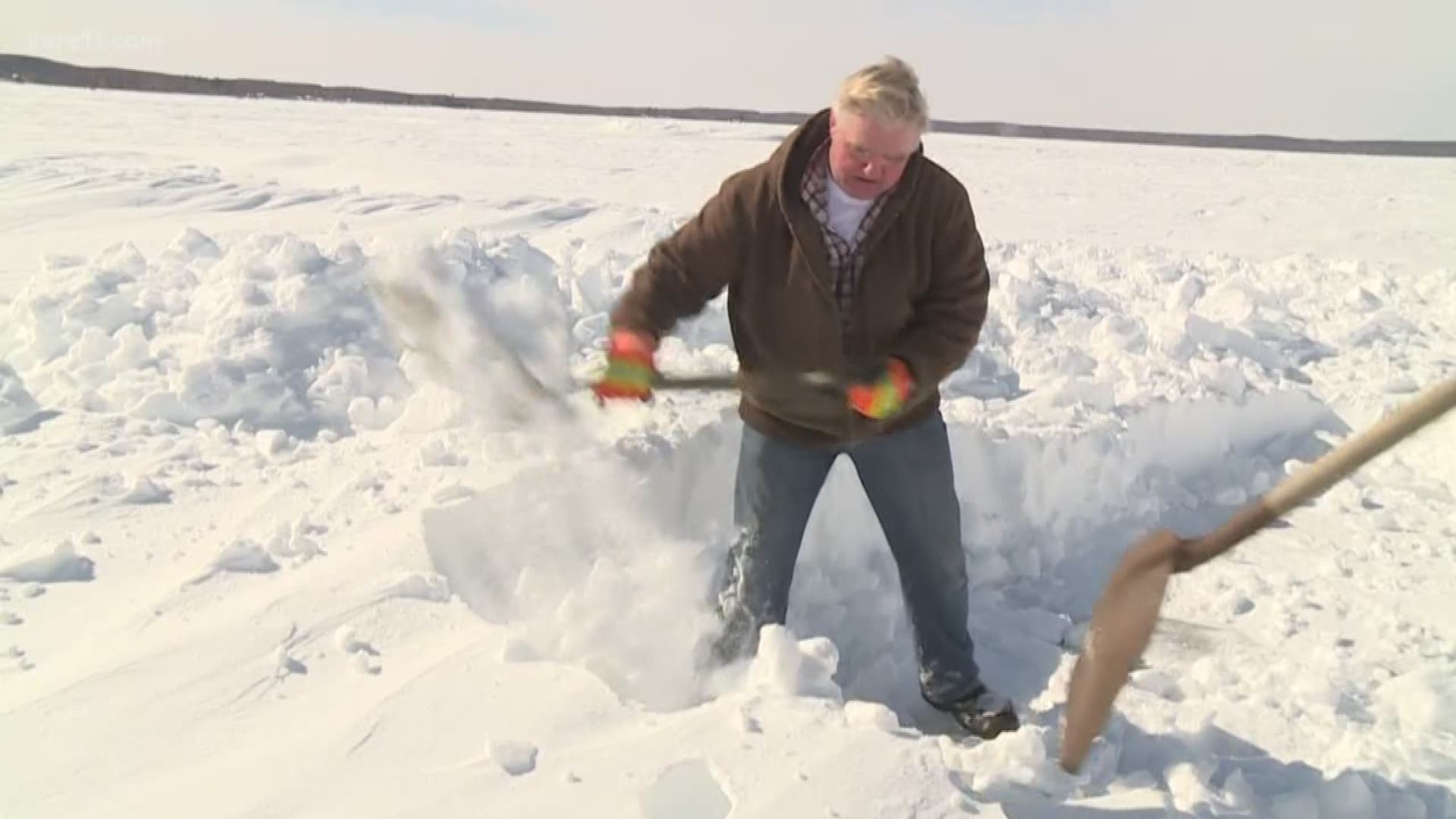 The fuel situation is crucial, as KARE 11 meteorologist Laura Betker says the current air temp in the Mille Lacs area is 6 degrees below zero, with windchill measured at 20-below. Making matters trickier is that the area is expected to receive another one to three inches of snow tomorrow.

Credit: Bill Spege
Bill Spege, his brother and two of their friends are hunkered down in an ice shack on Lake Mille Lacs, trying to stay warm until help arrives and the ice roads get plowed.

Trevor Spege's ice house is in a group serviced by Barnacles Resort and Campground out of Aitkin. Bill Spege says they have been told the snow is so deep that some of the resort's plows have broken. A post on Barnacle's Facebook page reads "The plows are on the lake (Monday morning) and working their way out. Along the way they are helping people get unstuck. Unfortunately it is a slow process."

Bill Spege says he understands the resort's dilemma, but with food and water running short they are starting to get a bit anxious. To make matters worse, he adds that the walleye bite is terrible.

The situation is similar at Jerry Brandt's Ice Fishing out of Onamia on the southern section of Lake Mille Lacs. The ice roads there are impassable as well, and Jerry had two plows break down Sunday  as he and his crews attempted to clear the roads and get clients to safety.

"He only has one working plow truck at present and moving with the blower is a slow process. He will get to you but it will take time so please be patient. Keep and eye out for him and be ready to go. Thank you everyone for your patience!," reads a Facebook post from Monday morning.

KARE 11 Facebook follower LuAnne Curtis-Schwartz is worried about her daughter, who is ice fishing at Brandt's. Curtis-Schwartz says the group is out of food, and propane in the ice shack is getting low. She added that conditions are so brutal the tires of the fishing group's vehicles have frozen to the ice.

A picture posted on the Brandt's Facebook page from Sunday shows what plow crews are dealing with on the big lake.

Jerry Brandt's Ice Fishing
To all those wondering about the progress this photo that Tim sent says it all. Jerry in the tractor and ice crew in 1 remaining truck following behind. Again, Jerry's intention is to get to all...

KARE 11 has tried numerous times to reach both Barnacle's Resort and Campground and Jerry Brandt's for updates, but calls went unanswered, most likely as all hands are on deck trying to rescue anglers who are stuck.

Mille Lacs County Sheriff Don Lorge tells Kare 11 that his office is not getting any 911 calls today, but confirms there were two search and rescue missions conducted last night to get desperate anglers off the ice. He does have a deputy on the ice with a snowmobile or ATV checking on shacks to make sure people have the necessities they need.

Minnesota DNR Enforcement Division Communications Coordinator Joe Albert tells us that resort owners are doing the best they can to clear roads and reach customers. Albert says most are choosing to stay with their shacks as long as they have enough food and fuel. There is a DNR warden on the ice checking on anglers who are stuck and assisting the resorts in their communication efforts.

Jen Withrow is one of those ice anglers who is inconvenienced, but safe. She and boyfriend Ben Searing brought their Ice Castle to Appledorn's Resort for Perch Extravaganza, bought a road pass and set up on a plowed site two miles from shore. She says the winds began roaring Friday night, and didn't let up until Sunday. They endured white-out conditions, pulled their shack out of it's spot when the wind began creating a liquid moat around it, and pulled it until they could go no farther.

Credit: Jen Withrow
This is a view from Jen Withrow's Ice Castle. The stick marks where the ice road should be, but it's covered with a snow drift that's multiple feet deep.

As of noon Monday they didn't even have lines down to fish, they were making popcorn and watching movies. "I've not been through this before," she laughed.

If you are stuck on Lake Mille Lacs and have pictures or videos, post them on our Facebook page or email them to news@kare11.com. 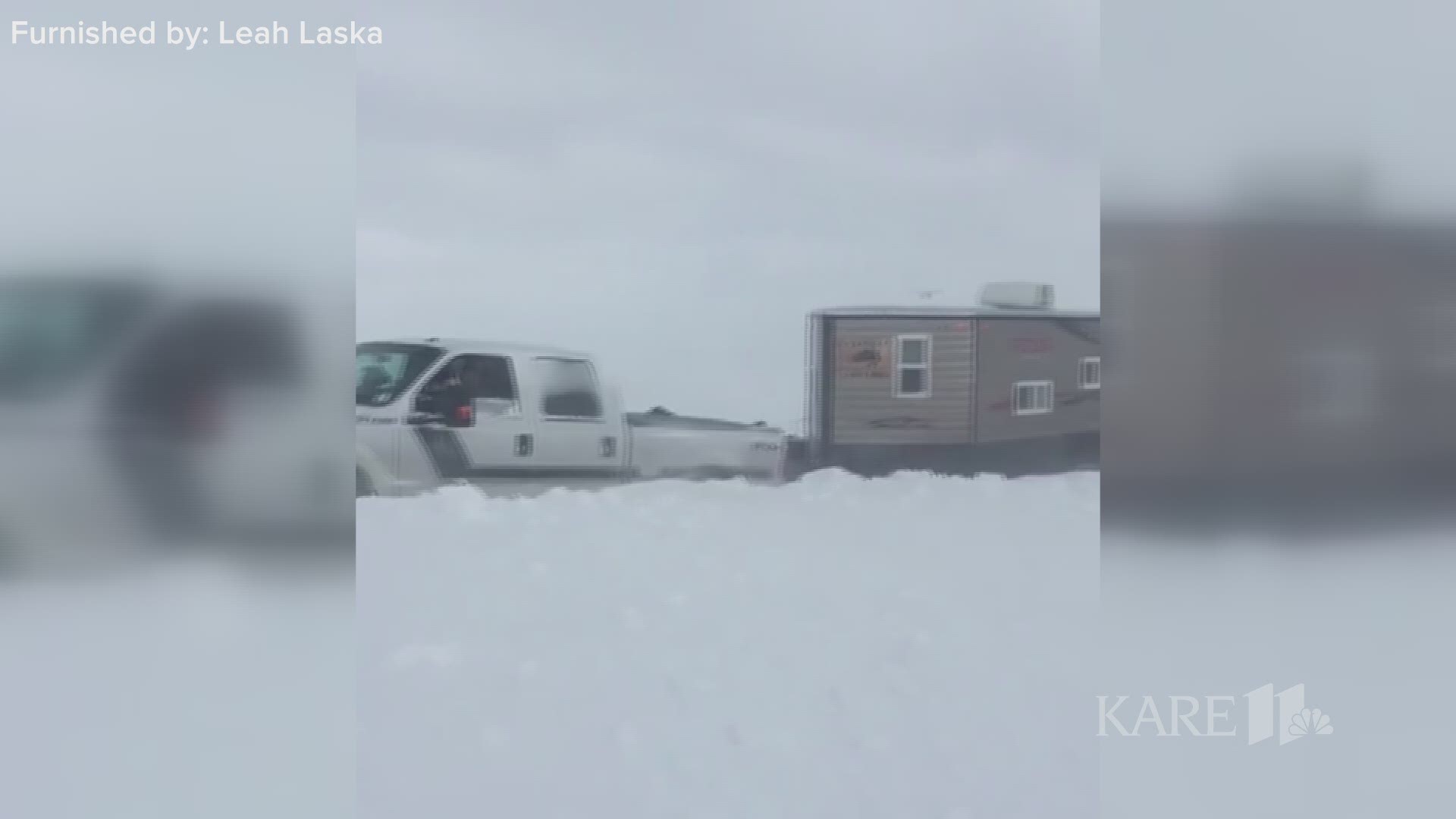