KARE 11 sat in during a sixth-grade class in St. Paul as they learned about 9/11 on Tuesday— an event they did not live through. 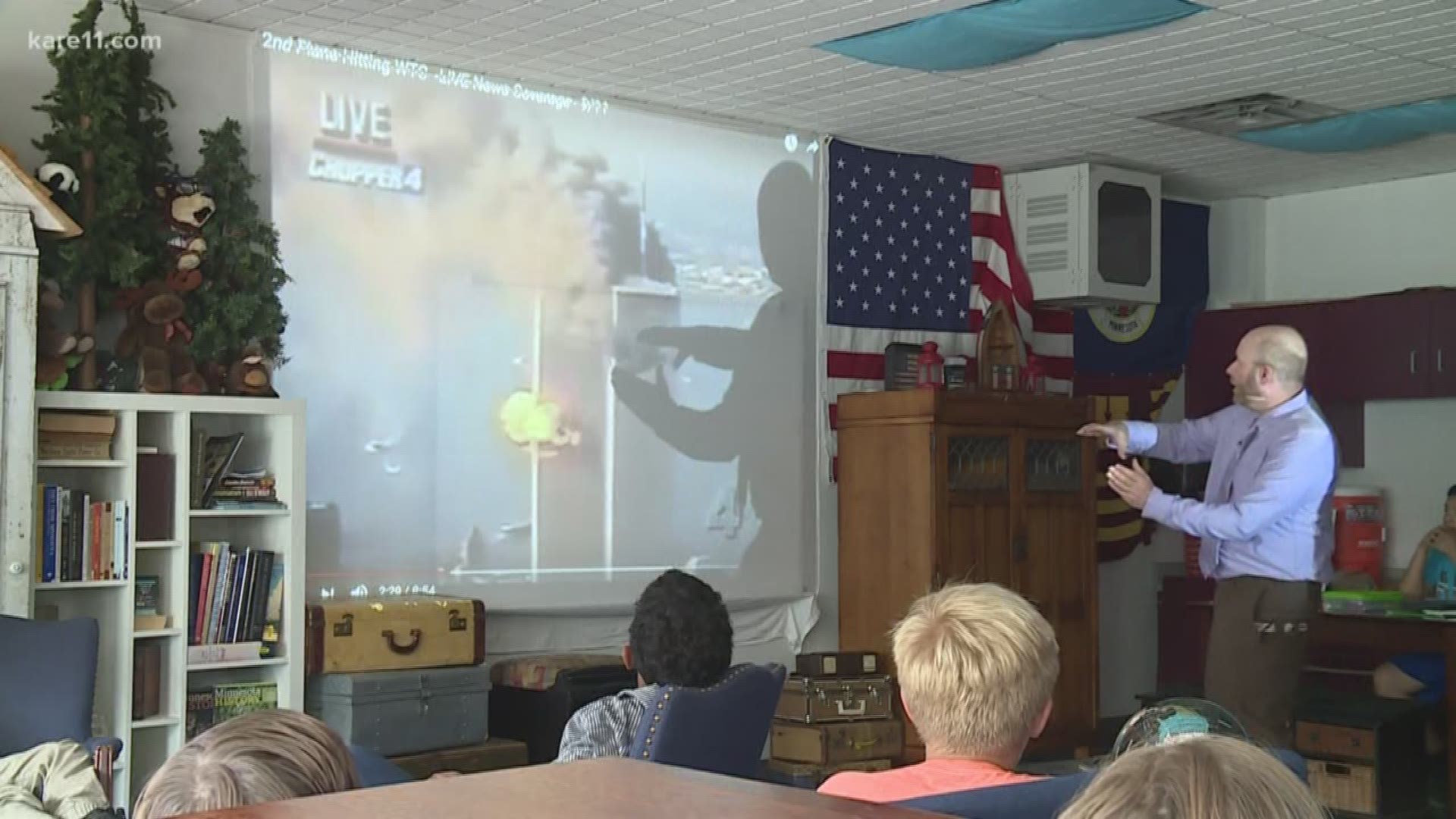 ST. PAUL, Minn. - Mark Westpfahl remembers every detail from the morning of Sept. 11, 2001, from the shorts he wore to the breakfast he ate to the positioning of his two televisions as he watched tragedy unfold.

His students at Capitol Hill Magnet School in St. Paul, however, have no such memories.

So Westpfahl spent the day immersing them in 9/11, showing them brief clips of news broadcasts from the morning of the attacks.

Students gazed at the damage, struggling to make sense of it all.

"There's been a lot of silence at times," Westpfahl said. "Then it turned into, 'Who was it? When did they do it? How long had they been planning?"'

KARE 11 sat in on an afternoon class of sixth-grade students, who were eager to learn but stunned by what they saw. They heard clips of witnesses as they described seeing the second plane hit; suddenly, 9/11 was happening in front of these kids, in real time.

Westpfahl had to remind students that 2001 was a different era, long before social media and Twitter burst onto the scene. As a part of his lesson plan this year, he decided to use his own Twitter account to ask a simple question to the world: "What were you doing on September 11, 2001?"

What were you doing on September 11, 2001?
Help my students see and understand more perspectives from around the country by retweeting this & tagging your responses with #CHCougars a͟n͟d͟ #PatriotDay. pic.twitter.com/5QuS3jbG0S

His tweet over the weekend garnered hundreds of responses, including one from former West Wing actress Melissa Fitzgerald. She described the terror of waking up in the morning and realizing she had friends in the towers.

Westpfahl wanted his students to see these responses. It gave them a sense of how people felt in the moment, and how it impacted them over nearly the past two decades.

"And tomorrow we're going to go through the Twitter feed, and find the commonalities between people," he said. "Geographically, where were they? What ages were they? And how do you think their responses were shaped by the images that we saw? Social media is a huge, powerful tool."

I was in LA-couldn’t sleep, went to the living room and turned on the tv. I didn’t know what was happening then the 2nd tower fell-I ran to wake up my then husband and said “the World Trade Center’s gone. It’s just gone” our phone started ringing-we had friends in the towers https://t.co/7Hm35I8eFl

Westpfahl often tells the story of a student in his school who had family members — ones he never got the chance to meet — killed in the plane that hit the Pentagon.

The student had always felt somewhat disconnected from the tragedy. It was a story told to him by others.

But then this student accompanied Westpfahl on a trip to D.C.

"And he saw the Pentagon for the first time," Westpfahl said, "and he looked at me, tears started coming down, and he said: 'This is real.'"