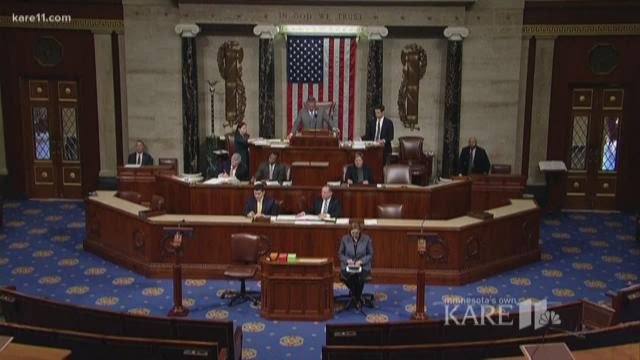 Ten thousand people died in the past year alone waiting for a ruling from the government about whether they qualify for Social Security disability benefits, according to records obtained by the Washington Post.

Last month, KARE 11 investigated the nationwide backlog in hearing disability appeal cases. We reported that the delays impact more than a million Americans. Many are forced to wait nearly 600 days to have their cases decided.

In November, KARE 11 detailed the case of Lyle Ryman of Hastings, Minnesota.

Medical records detail how an eye infection left him legally blind in both eyes. As a result, he was unable to keep his job as a professional truck driver.

“I'd be a danger to myself and others if I did work,” Ryman said in an interview.

To help explain what he sees now, Ryman blurred out a pair of glasses. “I'd say slip these on,” he said. “Okay, go about your business. Good luck.”

Ryman thought he would qualify for Social Security Disability benefits. That's the government insurance program that automatically takes money from our paychecks. He hoped the disability benefits would help him keep his small family farm – a home for rescue horses.

But he got a letter last year rejecting his claim. And when he appealed? More bad news. He was originally told that might take more than a year.

“They said this could take up to 18 months,” Ryman said. Or even longer.

In Minneapolis, it's even worse. There was a 22-month delay, as of this fall.

In an investigation published earlier this month, the Washington Post reported that more than 10,000 people died last year while waiting for a disability decision.

“To listen and hear the stories about people being deceased before a hearing took place is unacceptable to all of us,” a Social Security official said at a hearing in September.

“Give my judges a clerk and two attorneys and we can go to town,” said Marilyn Zahm, President of the Association of Administrative Law Judges. “We will be able to turn out a lot more decisions.”

More money has been proposed. But Congress adjourned this week without passing a new budget,

In effect, kicking the can down the road.

An attorney who specializes in disability cases says Minnesotans stuck in the backlog are caught in a crippling financial Catch-22.

“And that is obviously inconsistent,” Kline said.

For Lyle Ryman, though, there's some surprising good news. After he contacted KARE 11, the government suddenly approved his disability claim without even making him wait for a hearing.