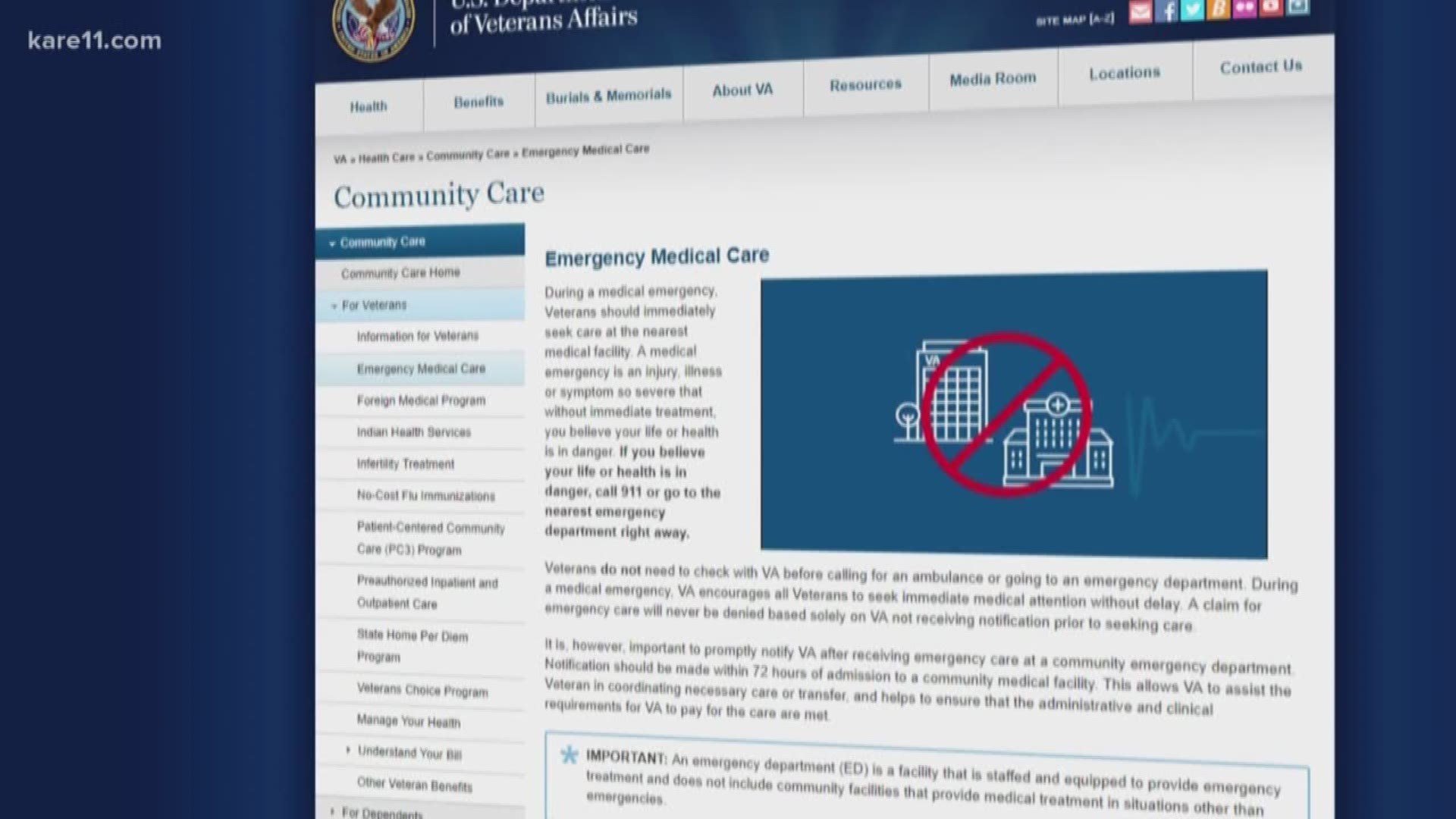 The Department of Veterans Affairs has begun taking enhanced steps to warn veterans about what they need to do to qualify for emergency medical care.

The move comes in the wake of a yearlong KARE 11 investigation entitled “A Pattern of Denial.” That reporting led members of Congress to call for a nationwide Inspector General Investigation of VA emergency room bill denials.

That federal investigation remains underway; however, the VA is already making changes.

“Veterans may have questions about how VA’s payment process for emergency care works,” states the new video embedded on VA’s Office of Community Care website.

The video appears designed to help inform and protect veterans from what happened to Jay Hill, a veteran stuck paying an ER bill because of a little-known VA rule.

If a veteran has a medical emergency, they're supposed to go to the closest emergency room, just like anyone else. But as Hill learned the hard way, for veterans who only have insurance coverage through the VA, there's a real risk that the VA might not pay.

WATCH: Pattern of Denial – Too Healthy to Cover

In 2014, Hill was visiting family for Christmas. In late December, he began feeling severe stomach pains and went to a nearby emergency room.

“I was just in agony, I couldn’t hardly walk,” Hill said. “It was just terrifying.”

Hill had been treated by the VA for similar problems with his stomach, but this time the VA was too far for him to travel. The hospital bill was sent to the VA, but in February 2015 his claim was denied.

“This Veteran has not received VA medical care within the past 24 months,” the letter said. It told him he had the right to appeal. He filed an appeal but was told it was after the appeals deadline, so it too was denied.

Nationwide, the VA has denied more than 219,000 emergency room claims for that singular reason during that same time period - January 2015 to September 2017. That amounts to $791,842,386 in bills veterans are responsible to pay.

WATCH: Vet turned over to collections after VA bill denial

The rule was part of the Veterans Millennium Health Care and Benefits Act, or The Millennium Act, passed in 1999.

However, as KARE 11’s investigation discovered, many veterans were not aware that the rule existed, or that it meant the VA wouldn’t cover an emergency room bill.

“No one’s aware of it,” Hill said. “From my generation of people getting out, I had no idea this was a thing.”

In March 2014, just 9 months before Hill went to the emergency room, the Government Accountability Office published a report stating, “most veterans” are “often not aware of specific eligibility criteria and assume that VA will cover their non-VA emergency care...”

It also specifically pointed out one veteran who felt he “should have been notified by the VA that he needed to be seen every 24 months to be eligible for Millennium Act coverage.”

Randy Williamson, one of the authors of the report, testified before Congress in 2014, again pointing out that the rules are confusing, and not clear to veterans.

“Some veterans do not always understand their eligibility for coverage of emergency care,” Williamson told members of the House Committee on Veterans’ Affairs.

But KARE 11’s investigation discovered little to nothing was done, and veterans are still footing high-cost emergency room bills they thought would be covered by VA.

Jay Hill’s bill was sent to collections after the VA refused to pay. He did pay $600 of the $3,400 bill, but after the collections agency took Hill to court, he went on a monthly payment plan that could take years to pay off.

“I am responsible for all of it - they wouldn’t cut me a break,” Hill said.

Stories like Hill’s have Randy Williamson, the now retired GAO investigator, questioning whether the VA followed up on his recommendations.

“One of our recommendations is that VA needs to do a better job informing veterans and finding out what the knowledge gaps are,” Williamson told KARE 11 in December of 2017.

The newly released video lays out in detail the steps veterans need to take for VA to pay their ER bills.

It’s information Jay Hill wishes he’d had before ending up in collections facing a decade of debt.

“At the minimum payments, it takes like 9 years, 10 years to pay off,” Hill said.

Our investigation started after a tip from a viewer. If you have a suggestion, email us at: