Minnesota schools, businesses and governments spent millions on technology that claims to fight COVID – but some experts say there’s no proof it works. 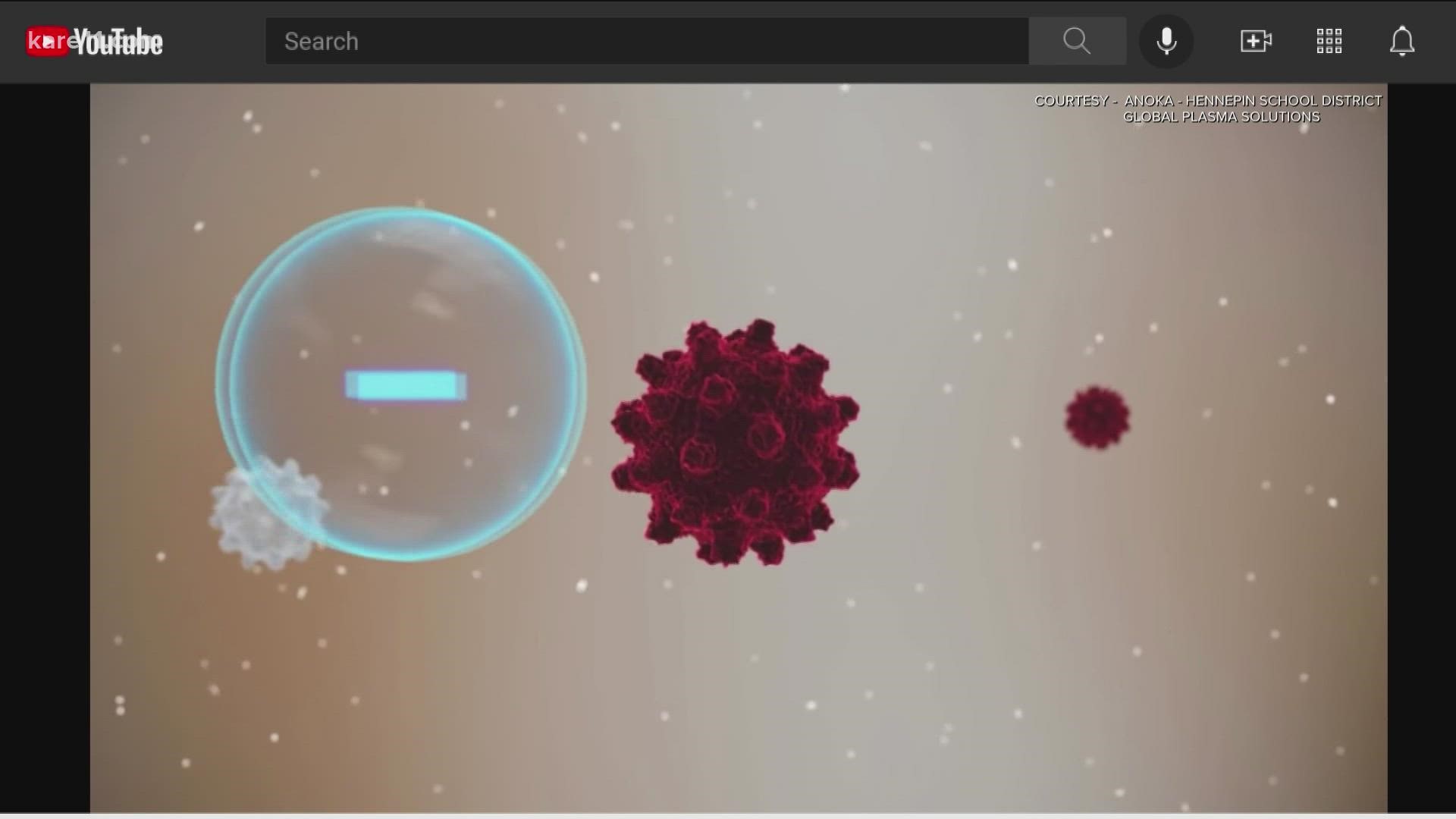 ANOKA, Minn. — In the midst of the pandemic, schools, businesses and governments faced an unprecedented challenge – how to quickly upgrade buildings to combat COVID.

But some experts – and a recently filed class action lawsuit – question whether one popular type of air treatment system may have oversold its effectiveness.

The company says it can be installed inside exiting HVAC systems. Once in place, it puts electrically charged ions into the air which are supposed to bond with particles – including airborne viruses – making it easier to filter them out.

GPS says its system is a remarkably effective way to fight COVID. The company’s website claims its ionization system inactivates “up to 98.3% of SARS-CoV-2 in 60 minutes.”

Based on that claim, officials – including many at schools in Minnesota and nationwide – have rushed to purchase the technology.

“You hear these amazing numbers like this product kills 99.9 percent of the pathogens in the air…but those tests are done in effectively shoeboxes,” said researcher Delphine Farmer of Colorado State University.

Credit: KARE 11
Delphine Farmer is a member of the research team that studied the effectiveness of the technology.

Farmer was part of a team of scientists at three different universities that tested the GPS ionization technology under what they say were more real-word conditions.

Their key finding: “There is no scientific evidence that bipolar ionization is effective,” she said.

But before the research paper detailing those findings was published schools, governments and businesses had already invested big.

Anoka-Hennepin, Minnesota’s largest school district, used $1.4 million of federal CARES Act dollars to purchase the GPS ionization system for their buildings. It was a way, they hoped, to keep kids and teachers safe and improve the overall quality of air in the classrooms.

“It helps us provide a cleaner indoor air environment,” a school official said in a video produced by the district.

Other districts made the same decision, using federal dollars targeted to combat COVID to buy the system.

Schools weren’t alone. The City of St. Paul installed GPS ionization units in 111 city buildings at a cost of $802,000.

Businesses bought the technology, too, including Tegna – the company that owns KARE 11.

KARE 11 asked Farmer if, in her opinion, schools, businesses, and governments got ripped off.

“As far as we know these devices have been shown in real world environments to do very little,” she explained. “That’s actually not to say these people got ripped off. It’s to say we just don’t know if these systems work yet. That’s the problem.”

The U.S. Environmental Protection Agency offers a similar caution, writing of bipolar ionization: “This is an emerging technology, and little research is available that evaluates it outside of lab conditions. As typical of newer technologies, the evidence for safety and effectiveness is less documented than for more established ones, such as filtration.”

The technology is also the subject of a class action lawsuit filed in federal court which alleges GPS “preys on people desperate to cleanse the air and protect themselves from … COVID 19.”

Global Plasma Solutions is fighting the lawsuit and has asked to have it dismissed. They declined an interview, but in a lengthy email a spokesman called the lawsuit “baseless.”

As for Farmer’s study, GPS called it unreliable, saying the “experimental design was faulty” and “its testing methodologies were inconsistent.”

GPS points to a study commissioned by the company which concluded “virus samples tested in an environment employing GPS technology were reduced much more rapidly” than the environments without ionization technology.

None of the local schools or governments KARE 11 spoke with have joined the lawsuit. A spokesman for Anoka-Hennepin says the district is happy with the purchase, noting it offers other air quality improvements in addition to the hoped-for COVID virus reduction. He said it seems to have been effective reducing odor in buildings.

A spokeswoman for Eastern Carver County Schools said in a statement: “While it would be unfortunate and disappointing if it was found to not have the effect on COVID-19 that was presented at the time of sale, we believe the systems will provide long-term benefits to the overall indoor air quality in our buildings.”

Experts say improving air quality is an important investment to battle the threat of COVID.

Prior Lake-Savage Area Schools: None

KARE 11 Investigates – The Gap: Failure to treat, failure to protect