Report to the President warns that whistleblower complaints about life-threatening delays exposed in a KARE 11 investigation have not been addressed. 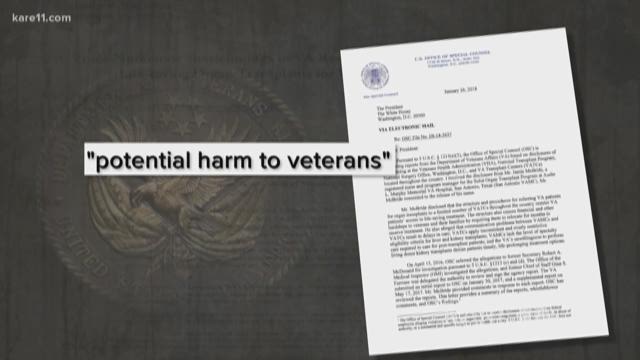 A scathing report by the government watchdog agency assigned to investigate whistleblower complaints accuses the Department of Veterans Affairs of failing to properly address systemic flaws that limit access to life-saving organ transplants for veterans nationwide.

Although the VA investigated problems raised by a VA whistleblower, the watchdog agency concluded the VA’s "findings do not appear reasonable."

In a letter sent directly to President Trump, Special Counsel Henry J. Kerner wrote that the VA did not address “significant hardships and barriers to care” faced by veterans needing transplants.

The allegations by VA whistleblower Jamie McBride were first brought to light in a joint investigation by KARE 11 and other TEGNA television stations in 2016. The investigation documented how sick veterans were being forced to travel long distances to get their operations, sometimes with deadly consequences.

"How many patients do you think unnecessarily died?” McBride was asked.

McBride has direct experience with the VA Transplant Program as manager of solid organ transplants at the VA hospital in San Antonio, Texas.

Instead of allowing veterans to get transplants at local hospitals, VA rules often require veterans to travel hundreds of miles across the country to special VA facilities, resulting in hardships and delays.

McBride provided KARE 11 with records showing he had been sounding the alarm to officials in Washington about deadly delays in the VA’s transplant program.

"The problems have not been solved. Period," he said at the time.

Recent research by experts at the Cleveland Clinic and the University of Pennsylvania backed up much of what McBride disclosed.

Veterans who rely on the VA for kidney transplants are less likely to actually receive a transplant -- and more likely to die waiting -- compared with other patients in need of the same surgery, according to findings released in November by Dr. Joshua Augustine of the Cleveland Clinic.

One of the factors? The greater distances veterans are required to travel to a VA facility.

"So, the distance itself appeared to be a big barrier to transplantation,” Dr. Augustine told KARE 11.

Those findings are similar to a 2014 case study by the University of Pennsylvania about veterans seeking liver transplants.

"What our data shows is that geography is a clear barrier," said Dr. David Goldberg.

In his letter to the President, Kerner praised McBride for blowing the whistle.

McBride claimed the VA program’s structure "causes financial and other hardships to veterans and their families by requiring them to relocate for months to receive treatment."

In KARE’s investigation, McBride alleged that the VA transplant centers apply inconsistent and overly restrictive eligibility criteria for liver and kidney transplants. The VA was asked to investigate what appeared to be a national problem, and the department submitted reports in January and May of 2017.

However, in its report, the Office of Special Counsel determined the VA failed to acknowledge the potential harm to veterans caused by delayed surgery and the hardships of travel. Kerner said of the VA's reports, they "do not appear reasonable."

Though the reports met the statutory requirements, the VA did not address the full scope of the allegations and "did not address the conflicting information regarding the availability of transplant care in the community and the coverage of organ harvesting and donor care through the Choice Program, which Congress created to allow veterans to seek care outside of the VA system when needed," Kerner wrote.

In response, the VA called Special Counsel Kerner’s criticism "ill informed due to a lack of understanding if the general standards and practices regarding organ transplants throughout the U.S. medical community."

After KARE’s initial reporting, Congress promised to review the issue.

"I applaud you. I read your article on the subject – outstanding," Dunn told KARE 11. "It's hard to imagine a bureaucracy actually comes up with answers like that."

To fix the problem, Dunn introduced the "Veterans Increased Choice for Transplanted Organs and Recovery (VICTOR) Act of 2017." As approved by the House, it would allow veterans who live more than 100 miles from one of the nation’s VA transplant centers to seek care at a non-VA facility.

"Once you lay out the facts for everybody, it’s pretty obvious that this is the right way to proceed," Dunn said. "The VICTOR Act will remove unnecessary obstacles facing veterans in need of organ transplants, making it easier for those who have served our country to receive life-saving surgery."

However, the Senate has yet to take up the bill.

If you have a suggestion for a KARE 11 investigation, or want to blow the whistle on fraud or government waste, email us at: Investigations@kare11.com.