The State of Missouri found big problems with a Florissant child abuse case in 2008. The same errors happened again a few years later. 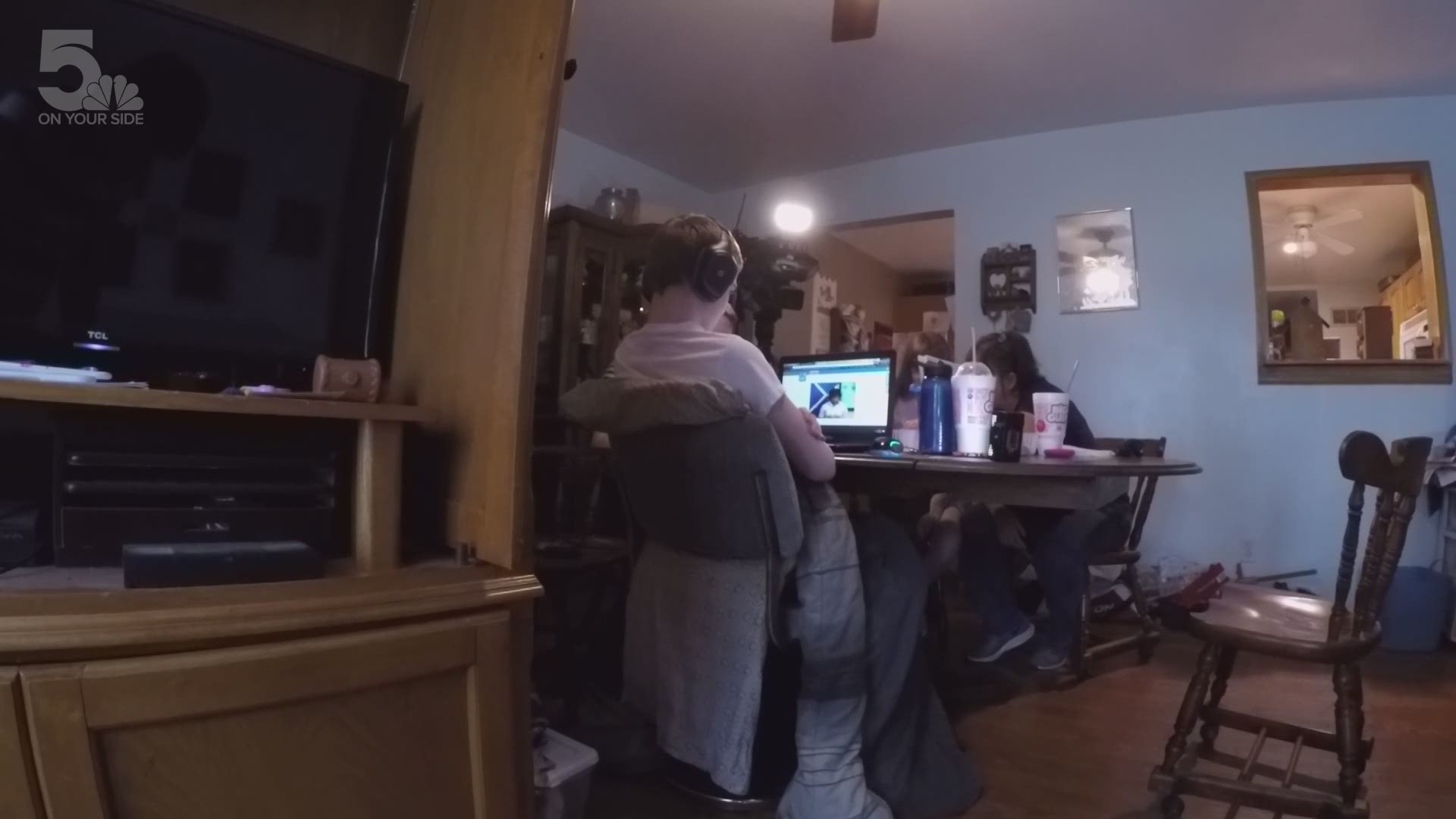 FLORISSANT, Mo. — When someone reports child abuse to the police, a clock starts ticking. Investigators have three years to bring the perpetrator to justice. After that, the statute of limitations closes the case.

The effects of child abuse can last much longer, though. For the Record family, four siblings are still coping with the damage they say their babysitter caused. The Florissant police chief admitted the clock ran out on their watch.

Seven years later, another child reported abuse and the system broke down again. In two cases, the agencies meant to protect the most vulnerable victims proved unresponsive to children brave enough to ask for help. That’s what led the Record family to call 5 On Your Side.

Kathy Record thought her kids’ new babysitter seemed like a good choice. She found Brenda Trokey’s advertisement for babysitting services in a local paper in 2000. She toured Trokey’s home and met the other people living there. Everything checked out, and Trokey’s price was competitive.

Finding a sitter for four children is challenging for anyone, but Record had an advantage. She worked with children as a teacher for decades. She thought she could spot the signs of trouble.

When her youngest son’s leg broke the first time, Record thought there was an innocent explanation. The second time, she started to blame herself. She asked doctors to test the 2-year-old for calcium deficiencies or any other possible cause.

The third time, police got involved.

In January 2008, Kathy and her husband Marcus were connecting the dots at the hospital as their young son got treatment for a fractured femur and a ruptured eardrum and the Missouri Department of Social Services started an investigation. The Records began thinking these incidents were too similar to be a coincidence.

“I called Trokey to ask her about it,” Record remembered. “I said, 'This is abuse.' And all I got was dead silence on the phone. She didn’t say anything.”

According to the police report and DSS investigation, Trokey opened up to investigators.

“As she began crying she said, 'I don’t know. I think he has some sort of bone disease,'” wrote the Florissant detective who questioned Trokey.

After the detective explained the fact that the young boy’s injury showed it was not an accident, “She took a deep breath and said, 'I was mad. I was trying to do laundry and I stepped on him because I couldn’t see him... I almost fell and hurt myself because of him, so I smacked him.'”

The detective wrote that he asked Trokey how hard she struck Record’s son.

“She explained she did not know how hard it was, but knew it was hard because her hand was hurting,” the detective recorded.

Police arrested Trokey. A little over a year later, the county prosecutor filed criminal charges against her. But during that year, the case became much more complicated.

Later in January, Kathy’s daughter Emily came to her with some disturbing news.

Trokey cared for Emily Record from when she was a baby to 8 years old.

“She threatened us, and she always said something bad would happen to my parents,” said Emily Record. “I remember the bags over the head and the physical abuse, too.”

The other children said they went through similar things at Trokey’s house. They said the babysitter would put plastic bags over their heads and spray cleaner in their mouths. The children told their parents Trokey refused to feed them and bound their hands with tape.

Kathy Record called the DSS hotline again in January 2008. But the things that happened for her son’s original case didn’t happen for the other children.

Eight months passed before the other three children were interviewed by child advocates. Police never questioned Trokey about the new allegations. In August, DSS closed its investigation, saying that, “Law enforcement is continuing their investigation... While the incident likely accured [sic] there is not enough evidence to support the allegations.”

Part of the problem was that there was no separate police report filed for the new allegations. In January 2009, a summary of the other children’s allegations and the interview by the advocate was added to the original police report.

The Department of Public Safety declined the Record family’s request for assistance for their out-of-pocket medical and psychiatric expenses the next month because “a report was not filed with the proper law enforcement authorities.”

Trokey pleaded guilty to second-degree assault and endangering the welfare of a child in July 2010. She served five years of supervised probation and passed away shortly after.

The statute of limitations for the other three children ran out on January 28, 2011. The Records settled a civil suit with Trokey, resulting in $30 monthly payments from Trokey. But they’ll never get the chance for a court to hold someone accountable for the children’s lasting injuries.

Chief Fagan took office this year after 25 years in the department. He said he wasn’t involved in the Record case while it was ongoing, but documents tell him detectives didn’t interview Trokey about the other children’s experiences because the prosecutor’s office told them not to.

“With the statute of limitations being expired, there's, unfortunately, nothing we can do,” said Fagan.

The attorney named in the police report supplement is no longer with the prosecutor’s office. A spokesperson for the current St. Louis County prosecutor told 5 On Your Side he’s personally never seen a case where a prosecutor asked investigators not to interview a suspect.

The director of the Office of Child Advocate for the state did a case review for the Records in 2012 and sent her findings in a letter to the St. Louis County Children’s Division. She wrote, “I believe that this investigation was not thorough.” She added that she did not agree with the decision to close the investigation “due to the lack of investigation.”

Just a few years later, another case would start with a child’s cry for help, and the suspect would fall through the cracks again.

“We made a mistake”

In November 2015, a student at Lusher Elementary in Florissant told his mother a teacher took him out of class and molested him. Hazelwood School District fired the teacher right away and Florissant police opened an investigation.

That investigation stagnated for 10 months. DNA samples taken from the student showed they came from another unknown male, but they were not compared to the teacher’s DNA. The teacher wasn’t questioned, and he wasn’t arrested. DSS closed its investigation as unsubstantiated.

When the I-Team’s PJ Randhawa asked former Florissant police chief Tim Lowery about it in May, he said, “For some reason, this case basically sat on somebody's desk and wasn't investigated properly.”

RELATED: 'We made a huge mistake' | Police admit they forgot to investigate teacher for 3 years after he was accused of molesting student

Three years after the student first reported the abuse, he called attention to it again with an outburst at school. A teacher called DSS, and police finally got a warrant for the teacher’s DNA. By that time the teacher, Deonte Taylor, was teaching young children in a new school.

“There's no doubt we made a mistake and made a huge mistake,” Lowery said.

Credit: St. Louis County PD
Deonte Taylor was charged with two counts of conspiracy to commit murder and two counts of attempting to tamper with a victim in a felony prosecution.

Current chief Fagan said changes have been implemented to prevent this from happening again.

“There are a lot of firewalls that have been put in place to make sure that things aren't missed and make sure things don't fall through the crack,” said Fagan. “The idea that things get dropped or things get missed will never be acceptable in this police department. And certainly we want to make sure that we're doing everything as outstanding as we can. But again, what's important for us is that if there are mistakes made, that we learn from him and we move forward.”

Emily Record felt a growing sense of disappointment with how police handled her claims. “In school they took us to field trips to police station stuff and so I always thought that they would do something,” she said.

“When I was younger too, I kind of dreamed of being a police officer,” she added. “They always say that the cops are there for the kids, and they weren't for us.”

Emily Record is in college now and she’s taking inspiration from her past to guide her future. She wants to help other children who experience abuse and the professionals responsible for treating them.

Even though Trokey is gone, the four siblings all live with the trauma of their experiences. Kathy Record, also, is still dealing with the damage.

“It's a repeat process of getting it over and learning how to forgive. Not for forgiving the perpetrator, but for me, because of holding onto anger, stuff that hurts me, and forgiving myself that I missed the signs,” said Kathy Record. “God's turning good out of it and I definitely believe justice is coming.”