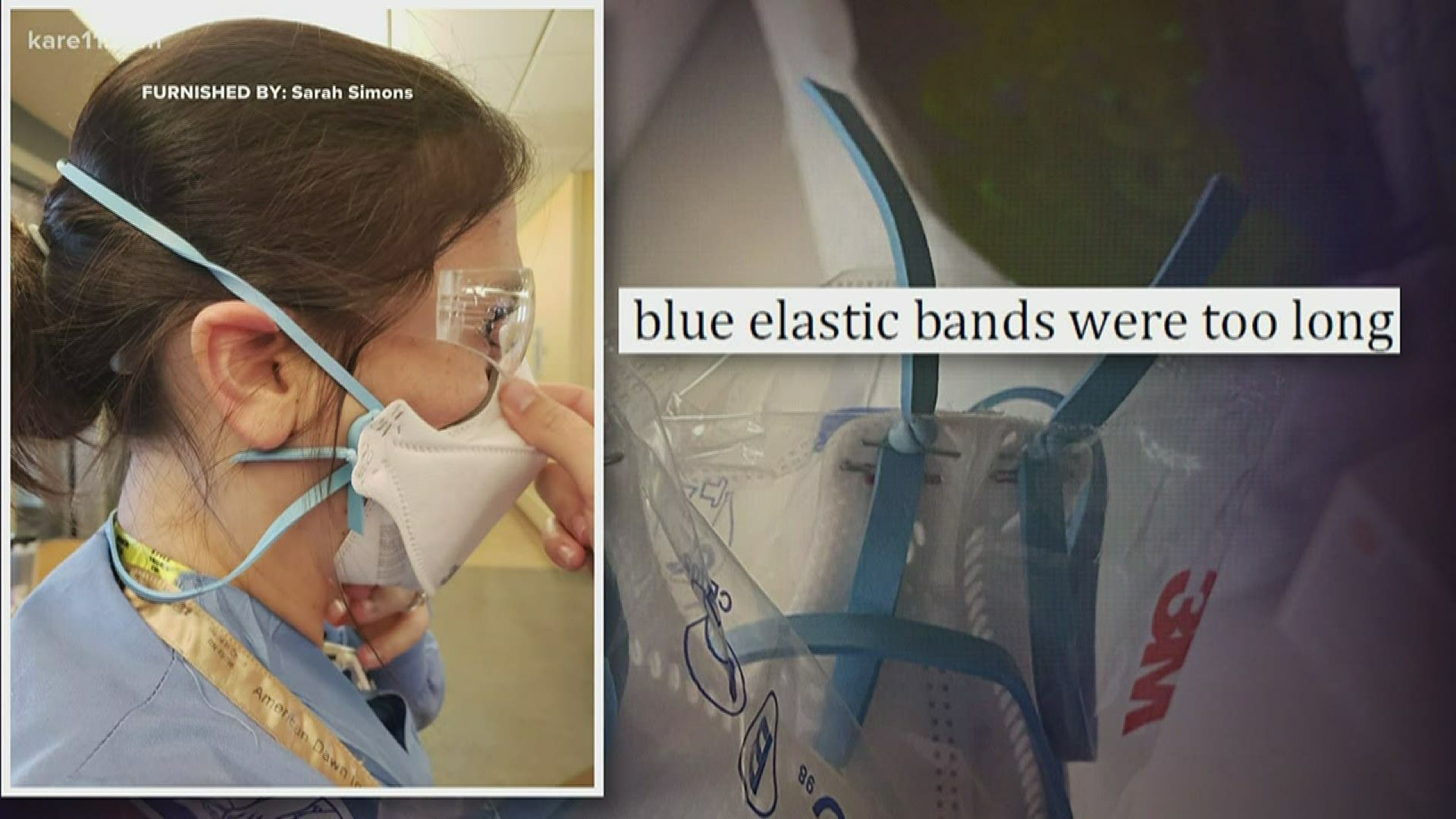 MINNEAPOLIS — Nurse Sarah Simons was in disbelief over HCMC’s solution to a shortage of N95 respirator masks.

The hospital had a cache of thousands of them in storage. The problem: they had been there for nearly 20 years, with manufacturing dates listed on them as 2001 and 2002, expiring well over a decade ago.

Despite the nurses’ objections, Simons said they had to wear them anyway. According to records obtained by KARE 11, the straps on some of the masks disintegrated on nurses’ faces when they were caring for COVID-positive patients.

After the nurses filed complaints with the Minnesota Occupational Health and Safety Administration (MNOSHA), HCMC has twice put new straps on the masks and put them back into circulation. Simons said the nurses are still wearing them and fear being infected.

“It doesn’t seem like that should be the standard of care for a first world country,” Simons said.

Credit: KARE 11
An HCMC nurse wears an expired N95 mask, which includes numerous staples on the sides where straps have been replaced.

HCMC blamed the use of the masks on a shortage of personal protective equipment – PPE.

In a statement, the hospital said shortage guidelines from the Centers for Disease Control are being followed, and the masks “should provide the expected level of protection to the user if the stockpile conditions have generally been in accordance with the manufacturer-recommended storage conditions and an OSHA-compliant respiratory protection program is used by employers.”

HCMC’s struggles underscore how Minnesota health care providers are still struggling to get enough PPE to keep their frontline safe from infection. Nurses at United Hospital, for example, have protested for not being provided hospital scrubs and having to wear their own from home.

Mary Turner, president of the Minnesota Nursing Association, said a new problem emerging at hospitals is lack of isolation gowns. Those are typically disposed of after treating a patient, but Turner said nurses are being told to continually re-wear the gowns.

“This is the one that’s breaking the camel’s back,” Turner said. “This is the final straw for a lot of nurses, to be basically going into a room with basically a dirty isolation gown.”

Turner said nurses at numerous area hospitals have reported trying to bring their own PPE, but say that is being met with resistance from administration.

“Is that right? That they should have to fight that hard just to keep safe?” she said.

The MNA worries that as elective surgeries are now available and more businesses reopen, the PPE shortages will become more critical.

Simons said HCMC nurses were first told about the expired masks in January and it was presented as good news because the hospital had a large cache of them.

As coronavirus began to spread in Minnesota and hospitals conserved PPE, Simons said toward the end of March the expired masks were given to nurses conducting higher-risk aerosol procedures with infected or potentially infected patients.

The mask manufacturer, 3M, says that the shelf-life for its respirator masks is generally five years and they should be thrown away after the expiration.

The nurses filed a complaint with MNOSHA, saying the masks were not properly fit tested and that the straps were crumbling.

An internal investigator agreed, according to the records, saying that the hospital had at least three documented cases of the bands breaking, including two while nurses were working with positive or suspected COVID-19 patients.

Simons said that when she asked why the hospital simply didn’t go to the state to get new masks, the state told them the hospital’s current supply of respirators had to be used first.

“The state can and does fulfill PPE requests and is averaging 30-40 shipments per day to hospitals and other providers. This allows for the disbursement of critical supplies while still ensuring that the state is maintaining adequate reserves for expected peak periods,” said Curtis Yoakum, Assistant Commissioner for Communications with the Minnesota Department of Administration.

HCMC pulled the masks on April 14 and had furloughed employees staple new straps onto them, according to interviews and records.

But the new straps were too long, Simons, said, and didn’t allow for a protective fit on the nurses. The nurses filed another complaint.

Following another internal investigation, HCMC again pulled the masks out of circulation, this time sending them to a third-party company to have the straps replaced. They were to be deployed on May 8, according to HCMC’s response to MNOSHA.

Nurses are wearing those today, while also having access "to other respirator models and PAPRs are another type of respirators available to use," an HCMC spokeswoman said.

Simons said the nurses wearing the repaired masks are facing a new problem with them: the new straps are too tight and the masks have too many straps to safely wear.

Simons, who is also a union leader at the hospital, said she’s aware of several nurses being infected with COVID – though she acknowledged she can’t be certain that it’s due to the faulty masks.

“There’s a lot of anxiety. A lot of uncertainty,” she said.

RELATED: Amid concern for their safety, health care workers test positive for coronavirus

RELATED: Allina Health expands use of N95 masks for staff