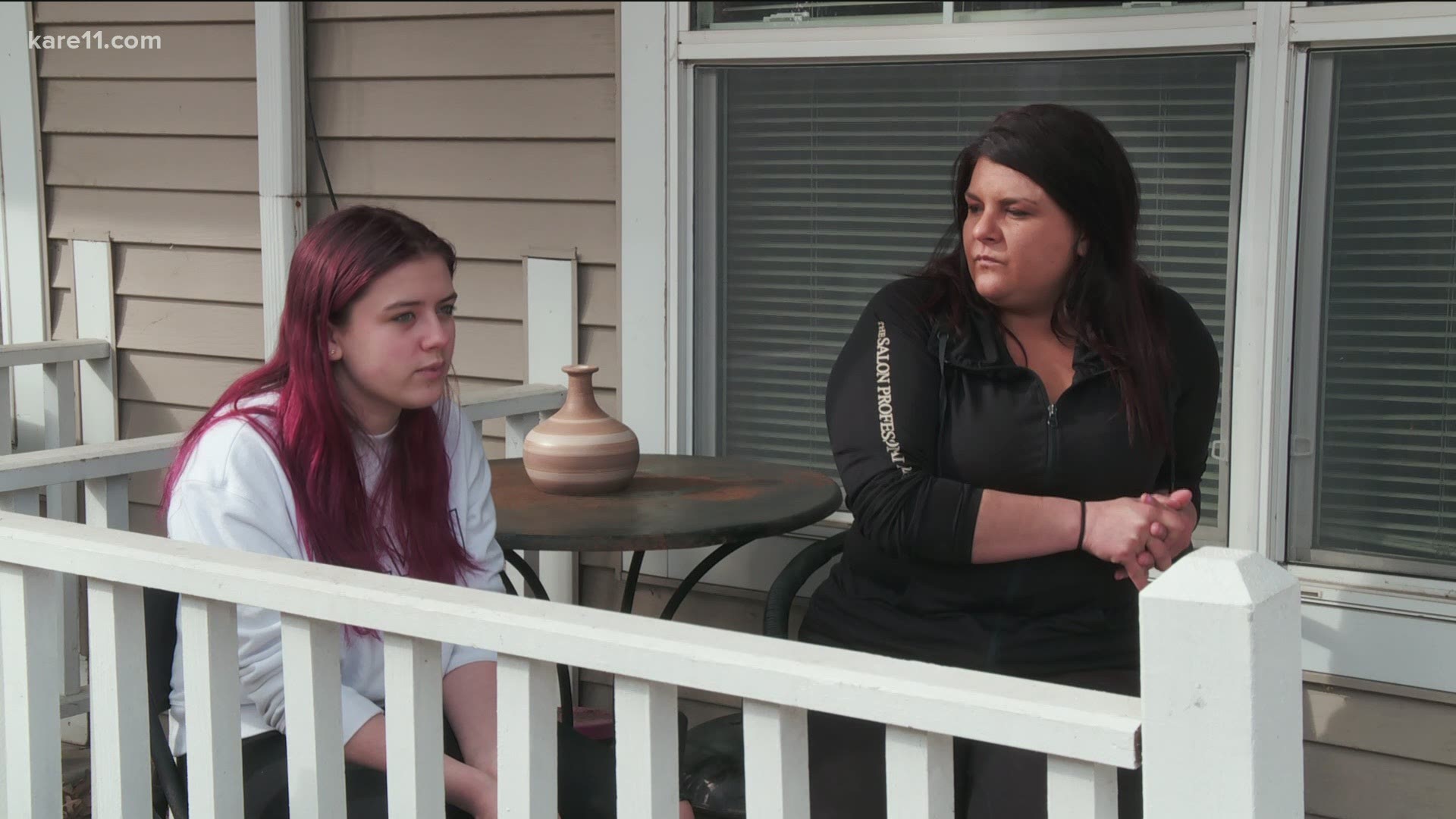 She woke up to flashlights, firearms, and strange men in her Coon Rapids townhome.

“Two of them had their guns up,” she said, holding her arms in the air as if holding a rifle.

“I thought we were being robbed at first,” said the hairdresser.

The home invaders smashed through the front door and proceeded to bash in bedroom doors – even breaking in on her young daughter.

“The sound was just so quick,” said 12-year-old Jaiselle Mathias of the moment her door slammed open.

“I got really scared,” she said, remembering how guns were pointed at her as she lay in bed.

“I’ve never felt so helpless as a mom,” Bianca said, “because all I did is sit there and scream initially.”

Down the hall, other armed men used a battering ram on the door of the guestroom where family friend Justin Garbette was just getting up for work.

“All of a sudden, my door burst through and I got zip tied,” he said.

In a matter of seconds, the Anoka County Sheriff’s Office SWAT Team - which does not wear body cameras - had achieved their goal of securing the home.

What’s more, a KARE 11 investigation has uncovered evidence that the correct address was easily available in public records. But Minneapolis authorities who requested the raid apparently failed to check them.

“‘Have a seat on the couch,’” she remembers them telling her. They said a Minneapolis police detective would be in soon to explain.

Bianca, her daughter and their friend were escorted downstairs in their pajamas to be interviewed.

No real explanation was given even after MPD Sergeant David Swierzewski came inside.

According to Bianca, they were told Minneapolis police were looking for someone who was armed and dangerous and lived at her address.

Although it was a Minneapolis investigation, the home was in Anoka County. So, the sheriff’s SWAT team was brought in to assist with the raid.

As her home was searched, she says it became clear to the officers that they had made a mistake.

“Oh, you’re not who we’re looking for,” she recalls being told.

“Ya think?” the now angry woman responded – looking at all the damage to her front and bedroom doors.

The only items taken by investigators were some mail addressed to the prior residents.

Bianca and her daughter had moved into the home in May of last year and couldn’t fathom why their house was targeted.

“I just don’t understand how they messed it up that bad,” Jaiselle said, “We’ve been living here for almost an entire year and you raided the wrong house.”

The search warrant left behind provided some clues.

The Anoka SWAT team and MPD detective left Bianca with a copy of a search warrant that authorized the raid.

It described what is known as a “no-knock” warrant - where police are not required to announce their presence before forcibly entering a property.

It was signed by judge Thomas Fitzpatrick and authorized a nighttime search of the residence without announcement of authority, looking for firearms, electronic devices capable of recording location history, and a blue and black jacket or sweatshirt, black pants, and black and white shoes.

“Did you even have a gun in the home?” asked KARE 11 investigative reporter A.J. Lagoe.

“My mom is like scared of them,” Jaiselle chimed in.

Credit: KARE 11
Bianca and her daughter can't fathom why authorities raided their home by mistake.

Unable to get answers on her own, Bianca asked KARE 11 for help figuring out why her home was targeted.

KARE 11 obtained SWAT team after action and incident reports from Anoka County that spell out what happened.

According to the Anoka records, Minneapolis police were investigating a robbery that happened in the Lake Street Target parking lot.

The victim was robbed of a handgun at gunpoint.

The records state that the identified suspect was reported to have been living in Coon Rapids with his mother.

KARE 11 is not naming him because he has not been charged in this case.

The address listed on the warrant is the same home where Bianca and Jaiselle now live.

MPD then obtained the no-knock warrant and requested help from Anoka SWAT in executing it.

The SWAT team drew up a tactical plan, which included breaching the front door with a ram in the pre-dawn raid.

A KARE 11 investigation found the real address for the robbery suspect MPD was targeting was easy to find.

What’s more, the man is on probation for a prior conviction and is required to keep his address updated with Anoka Community Corrections.

In an email to KARE 11, an Anoka county spokesperson confirmed the man is in full compliance with the address requirements of his probation - and was when the raid happened back in February.

A simple check with the local probation office would have indicated that the suspect was no longer staying at the Coon Rapids house where Bianca and her daughter now live.

There were other reasons to believe he had moved.

KARE 11 discovered St. Paul police incident reports showing they had multiple interactions with the man at his current address – after the Target parking lot robbery and before the botched Coon Rapids raid.

Some basic checking could have prevented the wrong-address raid.

It is not the first time police have raided the wrong home.

Surprise police raids like this have resulted in civilian deaths and attracted criticism since the war on drugs was at its height in 1980s and 90s.

No-knock warrants have come under even harsher criticism nationwide since police in Louisville, Kentucky shot and killed 26-year-old Breonna Taylor in her home in March 2020.

Gunfire erupted between the detectives and Taylor's boyfriend, who said he thought the officers were home invaders.

Taylor was struck and killed by police bullets.

Her name - along with George Floyd's - has been chanted nationwide during protests against police killings of Black people.

Her boyfriend, Kenneth Walker, was among those in attendance at the funeral last week for Daunte Wright, the young man killed during a traffic stop in Brooklyn Center.

Hollins introduced a bill to regulate when no-knocks can be used in Minnesota. The proposed legislation initially limited them to cases involving first degree murder, hostages, kidnapping, terrorism, and human trafficking. A modified version passed the House but has yet to gain traction in the GOP-controlled state Senate.

Hollins says too often, no-knock warrants have been used disproportionately on communities of color.

“We need to work with law enforcement,” Hollins said, “to make sure we’re doing our due diligence before invading someone’s home. And potentially the wrong person’s home!”

“What due diligence was done to make sure that the proper individuals were staying in that house?” KARE 11 asked Anoka Sheriff James Stuart about the raid on Bianca’s home.

“That would be a question for MPD,” replied Stuart.

Stuart says he can’t remember a similar “terrible situation” ever happening in Anoka County, and acknowledges his team did none of their normal fact-checking or surveillance before executing the no-knock warrant.

He says they trusted MPD to have done their due diligence since it was their warrant.

Sheriff Stuart says he was “hot under the collar” when learning they’d gone into an innocent family’s home.

“It will certainly cause us to pause and reflect on how we interact with outside investigating agencies,” he said.

What, if any, steps MPD made to fact-check the information is not known.

Following the death of George Floyd, Minneapolis police announced restrictions in November on the use of no-knock warrants as part of promised police reforms.

“This is about proactive policymaking and instilling accountability,” Mayor Jacob Frey said in a press release at the time. “We can’t prevent every tragedy, but we can limit the likelihood of bad outcomes. This new, no-knock warrant policy will set shared expectations for our community and clear and objective standards within the department.”

When KARE 11 filed open records requests under Minnesota’s data practices law to find out if the new policies were followed in the Coon Rapids raid, a city official replied: “MPD would not have any reports related to this incident as it did not occur in Minneapolis.”

State law requires search warrants and lists of what was seized to typically be filed with the court within 10 days.

More than two months after the early morning raid on Bianca’s home, there’s still no record in the state court system of the search warrant – or the evidence provided to Judge Fitzpatrick by MPD Detective Swierzewski when he applied for the warrant.

Except for the copy left with Bianca, there is no public record of the search warrant’s existence.

Spokesman John Elder told KARE 11 MPD acted on the best information they had and defended the use of the search warrant because the robbery suspect still had mail going to the Coon Rapids address.

Even so, Bianca says a little fact checking by MPD could have saved her a damaged home and a lot of mental trauma.

“I actually asked them,” she said, “What would it have taken for you guys to shoot us?”