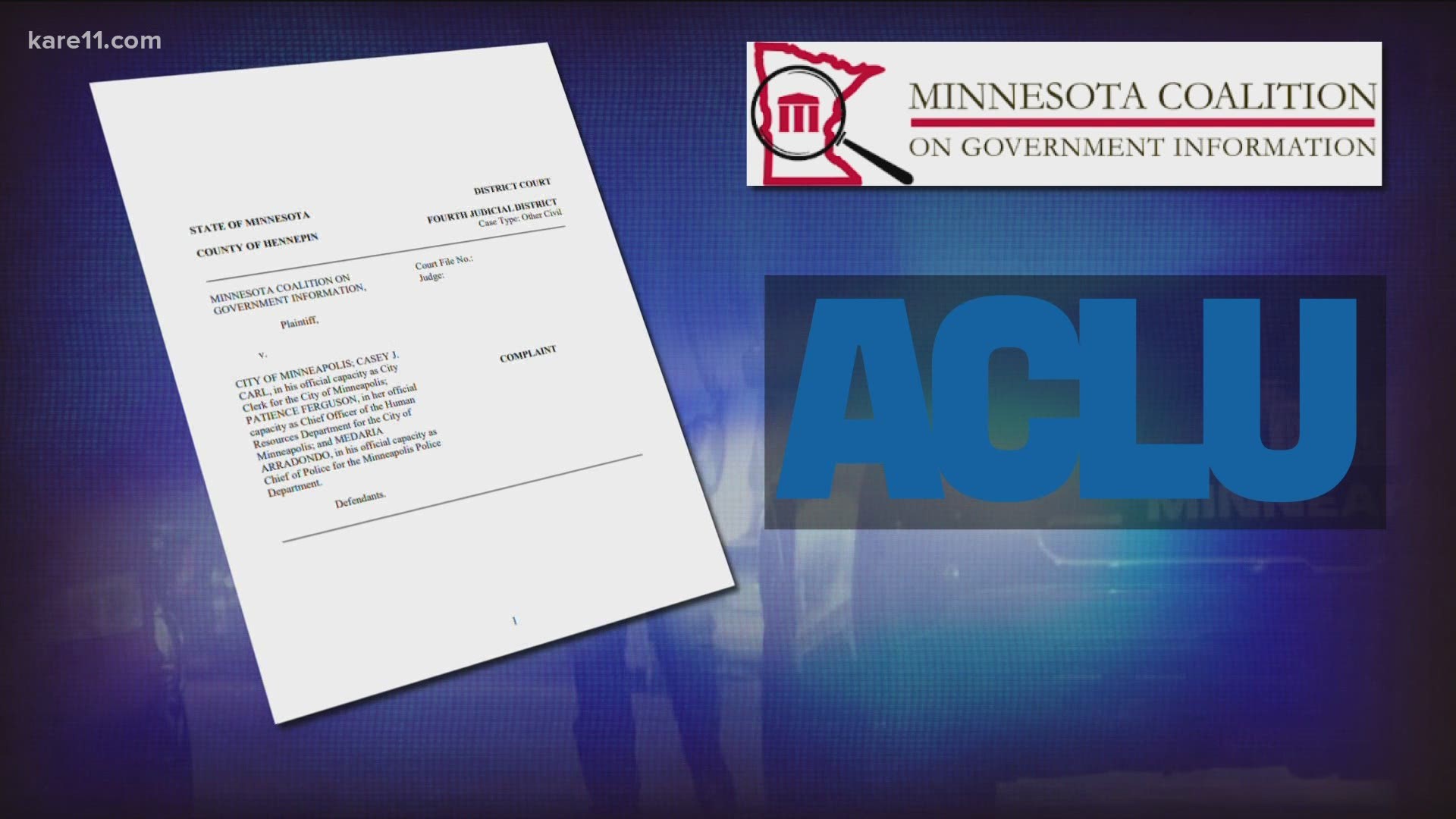 MINNEAPOLIS — Claiming Minneapolis has a “culture of secrecy,” the American Civil Liberties Union and a Minnesota group devoted to accessing public records are suing to force the city to release details about hundreds of police misconduct cases currently kept secret.

The lawsuit accuses city officials of hiding behind what it calls “linguistic gymnastics” to bypass a state open records law and cover up police misconduct.

The lawsuit comes in the wake of a series of KARE 11 investigations that documented how the Minneapolis Police Department has referred hundreds of sustained cases of police misconduct for so-called “coaching” rather than official discipline.

Minnesota state law says information about “disciplinary action” is public and must be released.

The Minnesota branch of the ACLU and the Ballard Spahr law firm filed the suit on behalf of the Minnesota Coalition on Government Information (MNCOGI). It argues that Minneapolis has been “willfully subverting” that law by claiming that "coaching" falls short of official discipline.

As a result, the lawsuit says the vast majority of substantiated police misconduct cases have been illegally hidden from the public simply because MPD called them coaching.

“They are intending to subvert both the spirit and the letter of the law,” ACLU attorney Isabella Nascimento told KARE 11.

An MPD spokesman said the department does not comment on pending litigation and referred questions to the Minneapolis city attorney.

The lawsuit echoes recent complaints about secret coaching made by civilian members of the city’s Police Conduct Oversight Commission.

“The system is tailored to make cops like Derek Chauvin slip through the cracks and avoid detection,” Commissioner Abigail Cerra told KARE 11 earlier this year.

“What I feel, along with many others, is that this is a policy that enables the Minneapolis Police Department to cover for bad cops,” said Commission Chair Cynthia Jackson.

The ACLU/MNCOGI lawsuit points to incidents involving Chauvin prior to George Floyd’s murder.

During Chauvin’s trial, prosecutors tried to introduce evidence of eight earlier cases accusing Chauvin of using excessive force. They included the case of a teenager Chauvin allegedly hit in the head with his flashlight – and then held face-down with his knee on the boy’s back for 17 minutes.

None of those use of force cases appear in Chauvin’s public discipline file. Instead, Chauvin’s file includes repeated cases listed as “Closed with No Discipline.”

“If you look just on the face of the public police records, there is nothing to suggest that excessive force was used in any of those,” ACLU attorney Nascimento said.

Tiny fraction of complaints are public

Earlier this year, KARE 11 documented how the overwhelming majority of complaints about officer misconduct are kept secret – even in cases where the department found the complaints had merit.

Between 2013 and 2019, city records show there were 2,013 complaints filed about MPD officers. Of those, the city says 373 – fewer than one in five complaints – were found to have merit.

The vast majority of those – 334 cases – were sent to coaching and, thus, remained secret.

Under the city’s definition, KARE 11 found only 39 resulted in official discipline and became public.

The lawsuit specifically names Minneapolis Police Chief Medaria Arradondo as one of the defendants.

Although Arradondo has publicly supported police reforms, the ACLU lawsuit alleges he “knowingly imposes coaching in cases in which he does not want the underlying facts to become public.”

City officials have repeatedly said coaching is only used for what they view as low-level complaints – issues like speeding in a residential neighborhood or swearing.

The lawsuit calls that claim “false.”  It cites examples in which it says the city has used "coaching” for more serious misconduct.

By keeping those incidents secret, Nascimento says the city allows police misconduct to continue – and often escalate. “It lets bad cops sit on the force for years and years,” she said.

In addition to an injunction forcing the city to release the records, the ACLU/MNCOGI lawsuit is asking the court to award monetary damages because of what it calls the city’s “willful violation” of the law.