Transcripts of 911 calls obtained by KARE 11 reveal clinic attack suspect Gregory Ulrich called 911 to turn himself in even as bombs were still going off. 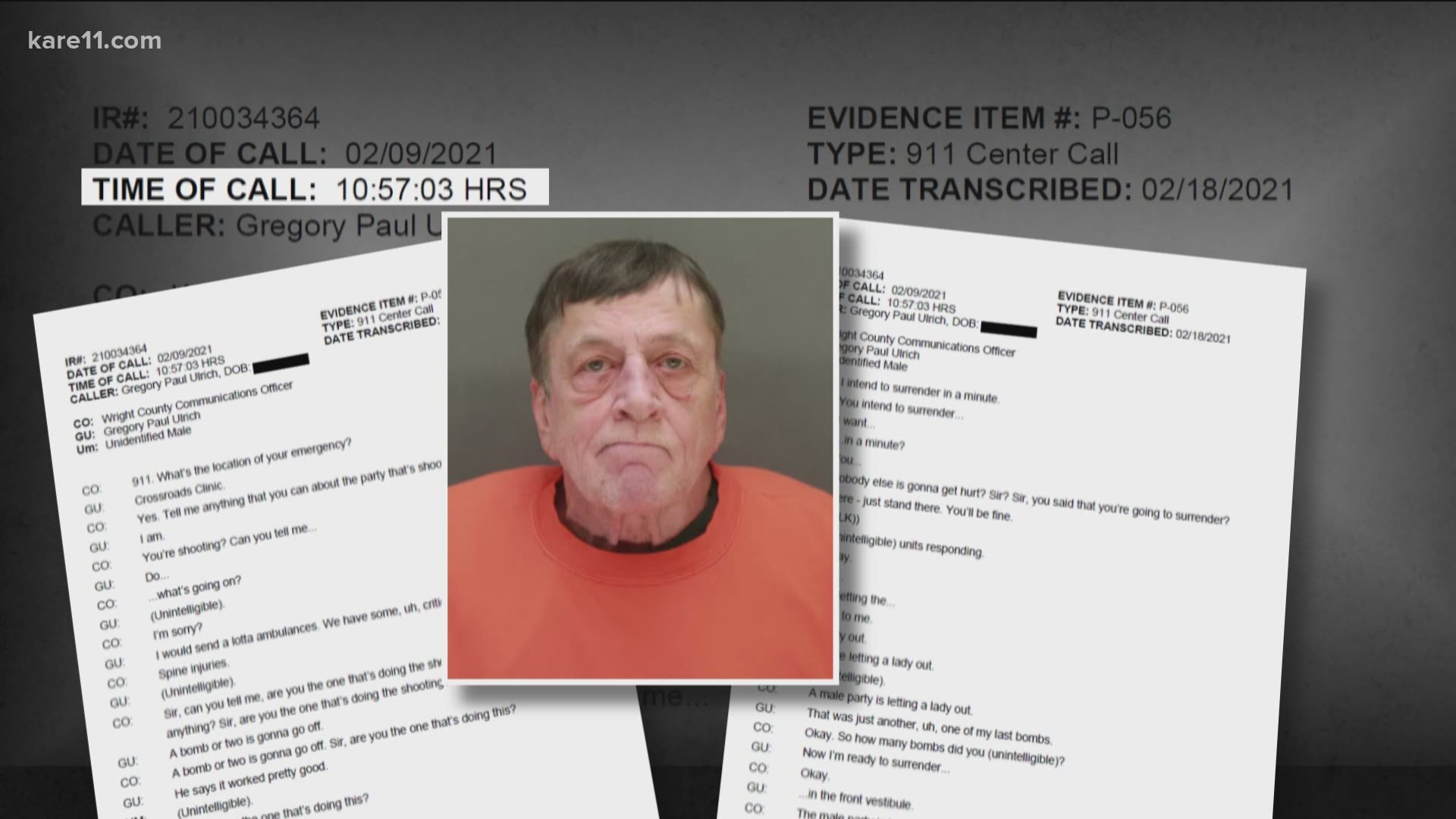 BUFFALO, Minn — Amid more than a dozen frantic calls to 911 reporting the mass shooting last month at the Allina Crossroads Clinic in Buffalo, one came from the man who said he carried out the attack.

Transcripts of the calls obtained by KARE 11 Investigates show Greg Ulrich phoned 911 just three minutes after the first report of shots being fired.

When Ulrich says he’s calling from the clinic, a 911 dispatcher immediately says, “Tell me anything that you can about the party that’s shooting.”

Within seconds Ulrich says the situation is serious. “I would send a lotta ambulances. We have some, uh, critical, uh, critical spine injuries,” he says.

When the dispatcher asks again about whether he’s the gunman, Ulrich discloses there are also bombs involved in the attack.

Ulrich: “A bomb or two is gonna go off.”

The transcript shows Ulrich appears to try to buy a little time, waiting for the bomb blasts.

Ulrich: “Tell the police to back away a little bit.”

Ulrich: “I intend to surrender in a minute.”

As he talks about surrendering, Ulrich says he is allowing a woman to leave.

See the full transcript below:

Then, as another bomb apparently goes off, he tells 911, “That was just another, uh, one of my last bombs.”

Video from a public transit bus Ulrich had taken to the clinic shows him carrying a large briefcase. As 911 instructs him to lay down in his stomach – with his hands out, not touching anything – he says three bombs went off, but one in his briefcase remains unexploded.

“Three went off,” Ulrich says. “And one in the briefcase … did not ignite.”

During the call, Ulrich gives his name. As he waits face-down on the floor for police to arrest him, he tells 911 there are five people injured. “Extremely,” he says.

RELATED: What we know about the man arrested in the Buffalo clinic shooting

Ulrich surrendered peacefully. He is charged with murder and attempted murder in the attack that left two young children without a mother, and four other innocent people wounded.

Authorities believe Ulrich attacked the clinic because he was angry he wasn’t receiving powerful painkilling drugs after a 2016 surgery on his back. Court records reveal physicians had cut off his opioid prescription after he had to be hospitalized for an overdose.

Last month, a KARE 11 investigation exposed how cracks in the system let the man with a history of mental illness, drug use, and threats against the clinic legally purchase the gun he’s accused of using.

Earlier this week, a judge ordered a mental health evaluation to determine whether Ulrich is competent to stand trial.