New photos show construction equipment has already arrived at a remote Minnesota property linked to a religious sect known for its child brides. 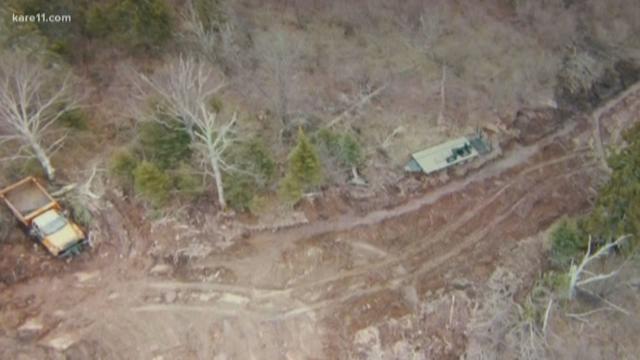 Aerial photos showing construction equipment – including a large excavator – are intensifying concerns that a fundamentalist religious sect is planning a new compound on 40 acres of land near Minnesota’s North Shore.

Seth Jeffs is a known polygamist, a convicted felon and a member of the Fundamentalist Church of Jesus Christ of Latter Day Saints (FLDS).

He is the brother of convicted pedophile prophet Warren Jeffs, now serving a life sentence in Texas for sexually abusing two child brides.

Credit: KARE 11
Seth Jeffs is a leader of the polygamist religious sect known as the FLDS.

A large crowd packed a community meeting in Grand Marais over the weekend to discuss fears that the polygamist group is preparing a new complex on the heavily wooded property.

“We wouldn’t be able to tell if anything is going on there,” one neighbor worried.

The meeting came in the wake of KARE 11’s reports that Seth Jeffs had opened a handyman business based in the Twin Cities and was buying land between Lutsen and Grand Marais.

Records obtained by KARE 11 showed that Jeffs had obtained a permit to construct a nearly 6,000-square-foot building on the property.

The citizens group in Grand Marais heard from Sam Brower, a private investigator who wrote the book “Prophet’s Prey” about his multi-year investigation of the FLDS.

“You can’t infringe on other people’s rights – then you turn into the bad guy,” Brower told the group. “But you can be diligent, you can watch, you can look out for the signs. You can look out for child labor or young girls with babies, things like that.”

“It’s the old human trafficking mantra,” he added. “If you see something, say something.”

Tonia Tewell, the founder of Holding Out HELP – a nonprofit group that helps people who try to leave the religious sect – also spoke about what she’s learned from former members.

“Usually between the ages of 8 and 12, boys are sent off into the workforce,” she told the meeting. “That’s one of the things you need to look for – young children working on construction sites.”

Following the meeting, Brower and Tewell went to inspect the remote property for themselves.

“I think Seth is trying to establish himself here,” Brower told KARE 11 as he drove to the location.

From the road, there’s not much to see beyond the entrance driveway still under construction. The property is clearly marked with a ‘No Trespassing’ sign.

“They could be working out there and nobody would ever see them – or know,” Brower said.

But the private investigator brought along an extra set of eyes. KARE 11 watched as Brower launched a small, camera-equipped drone.

Credit: KARE
Brower used a small, camera-equipped drone to get a bird’s eye view of the remote property.

The images from the drone document what’s happening beyond the view from the road. They show excavation equipment is already on site: a large backhoe, a smaller bobcat, a dump truck and the construction trailer apparently used to haul them.

The photos also show a large camper trailer, a temporary place where Seth Jeffs or others might stay during construction.

Credit: KARE
Brower’s drone captured this image of a large backhoe already on the property.

Brower believes the photos are evidence that Jeffs is serious about following through with his plans to build.

At the community meeting, North Shore residents expressed strong opposition to any development by the polygamist religious sect but struggled with what steps they could take to prevent it.

“What we do is a real question,” said Jeremy Hanson, who helped organize the meeting.

Credit: KARE
The drone spotted this dump truck along the driveway being built into the construction site.

Cook County Sheriff Pat Eliasen and others warned everyone not to take the law into their own hands. He assured residents that officials were watching carefully. But he added there is little law enforcement can do unless there is evidence that members of the group are breaking the law.

Many residents still hope a civil lawsuit served on Seth Jeffs back in January – and a pending judgment against the FLDS – might allow victims to seize the property and block construction of a compound.

KARE reported in January that the lawsuit named Seth Jeffs as one of the FLDS officials accused of helping arrange “religious sexual rituals with underage girls.”

Credit: KARE
A lawsuit claims Seth Jeffs was one of the FLDS officials who helped arrange “religious sexual rituals with underage girls."

Jeffs refused to answer the door when KARE 11 reporter A.J. Lagoe tried to ask him about the allegations moments after Utah lawyer Alan Mortensen served him with the lawsuit.

However, that legal process could take years. And, for now, it appears Jeffs is digging in.