The disabled and elderly already faced a shortage of Personal Care Assistants before the pandemic. Lack of PPE and higher pay to stay home has made the problem worse 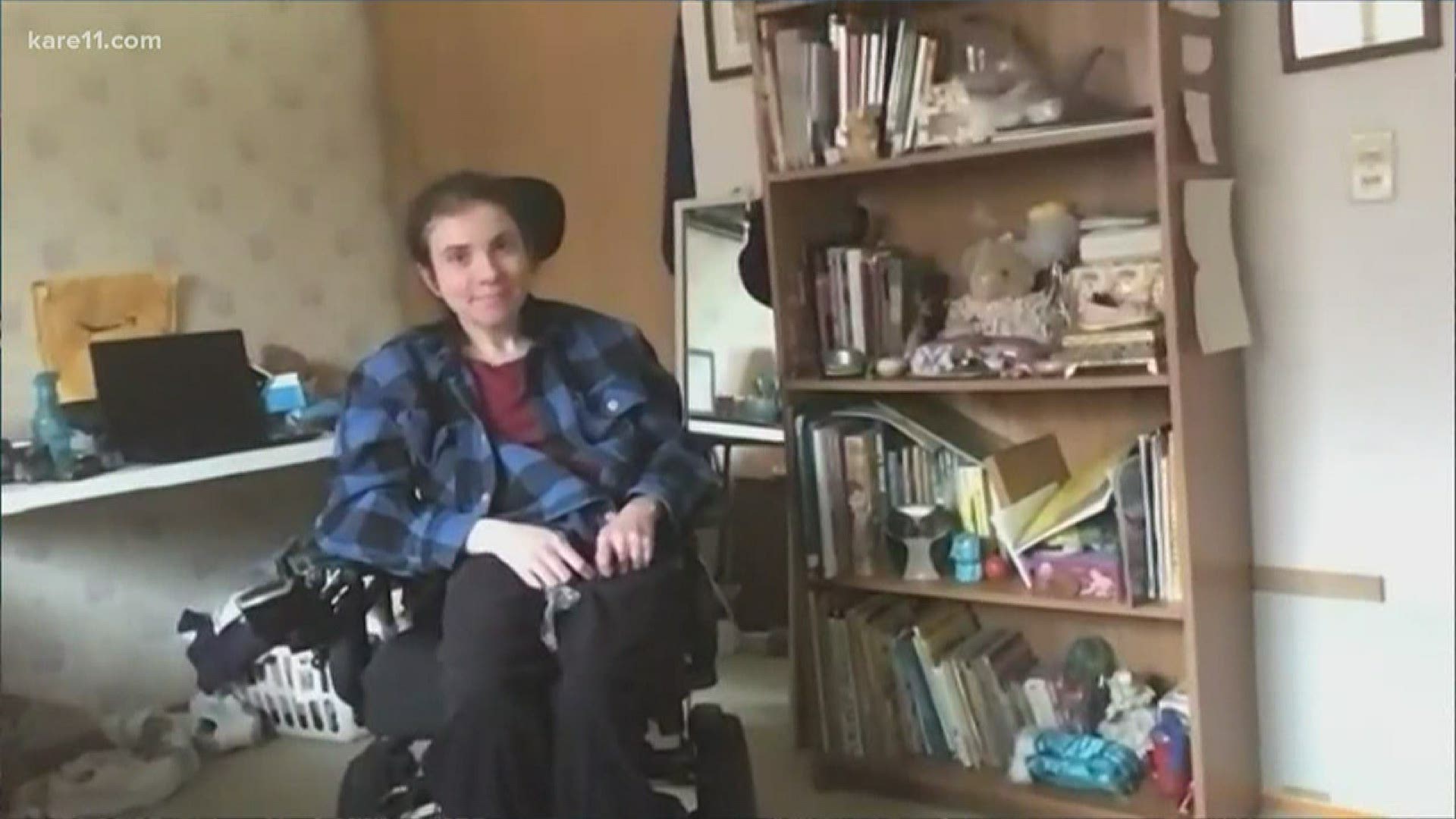 BROOKLYN PARK, Minn. — Born with cerebral palsy and a quadriplegic, 31-year-old Lauren Thompson has been dependent on Personal Care Assistants - or PCAs - nearly all of her life. She needs their help get out of bed in the morning, to make her meals, to take a shower, use the bathroom, and to get her back into bed at night.

“I basically need them to survive,” she said.

Even before the COVID-19 pandemic, a shortage of PCAs already made it difficult for the thousands of Minnesotans who depend on home health care like Thompson to find a provider. But COVID-19 has made the problem far worse, leaving some of the state’s most vulnerable without the care they need, KARE 11 investigates has found.

For Thompson, its meant having to go without care.

For many disabled and elderly, PCAs are what allows them to live and work independently. Without the home health care workers, they would often be forced to live in nursing or assisted living homes, where coronavirus has run rampant.

PCA workers were already scarce due to the state reimbursement formula. They make such low salaries - anywhere from $11 to $14 an hour - that many could get paid more working fast food or retail jobs.

Now the federal CARES Act passed in March has made it harder for the disabled to find PCAs. Some PCAs could virtually double their income if they filed for unemployment. That’s because the state would pay for half of their salary, and the federal government is providing an additional $600 a week.

“It’s a critical shortage and people are really struggling,” said Roberta Opheim, the state Ombudsman for Mental Health and Developmental Disabilities. “We are seeing and hearing complaints of people not getting their services.”

Making the problem worse: many PCAs don’t have the necessary safety equipment such as masks and sanitizers they need to assist their clients, putting them in fear of infecting those they care for – or being infected themselves.

PCA agencies are only required to provide their workers with gloves, and while many say they’re trying to find other safety equipment, it comes out of their own coffers, which are already close to empty.

While that legislation passed out of a committee on Wednesday, Abeler said it has a long way to go before actually happening. And he noted that it still wouldn’t pay a PCA as much as they could make if they collected unemployment.

“This is life and death,” said Republican State Senator Jim Abeler of Anoka. “If the PCA doesn’t come to some of these people, they will die.”

Nearly 2,000 PCAs have filed for unemployment since March 16, according to the state economic department, even though those workers are considered essential and there was already a shortage of them in the state.

At Cherish LLC, a PCA provider in Hibbing, Kim Tyler said about a quarter of her 300 PCA’s have filed for unemployment.

Ultimately, the impact is borne by her clients, who sometimes cannot get the care they need, she said. “The fact is they are leaving people who are elderly or have disabilities without help in their homes,” she said.

The same reimbursement formula that pays PCAs such low wages has also made for razor thin profit margins at the provider agencies. Some agencies say they’ll be forced to close if reimbursement doesn’t improve.

At Belle Mente - Italian for “Beautiful Mind” - a PCA provider in Grand Rapids, owner Meghann Lewis said she’s burned through thousands of dollars in savings in trying to find PPE and paying for overtime. If this continues, she said her agency will fold by July.

“I’ve done everything I could,” said owner Meghann Lewis. “I’ve got no savings left.”

About a quarter of Lewis’ PCA’s have filed for unemployment, she said. Home health care workers can file for unemployment if they’re laid off or terminated in some cases, but now can also site COVID-19 as a reason they’re out of work.

Lewis said she’s challenged some of the filings, arguing that the workers were not laid off, but ultimately, they’ve been marked as eligible by the state.

“We have clients that will go days without care,” she said.

In other cases, it’s leaving family members and friends to pick up the slack. Scott Proudfoot, for example, has been dependent on PCA care since he broke his neck in a swimming accident eight years ago, leaving him paralyzed from his chest to his toes.

Without PCA’s, its left his family to provide his care, and they struggle to provide it.

“Just getting him out of bed is hard. I’m just at an age where I physically can’t do it,” said Scott’s mother, Anne Proudfoot. “But what choice do you have? You have no choice.”

Lauren Thompson’s mother, Cheryl, has also tried to provide PCA care for her daughter. But she injured her back years ago, so the help she can provide is limited.

“To be fair, I feel like for me and for many people like me that the work shortage in the PCA field has made so we haven’t been living 100 percent for awhile,” Lauren said. “But this has certainly exacerbated it by a lot.”