Gov. Tim Walz said he would support daycares that kept their doors open for children of essential workers. But thousands of providers say that help has not come. 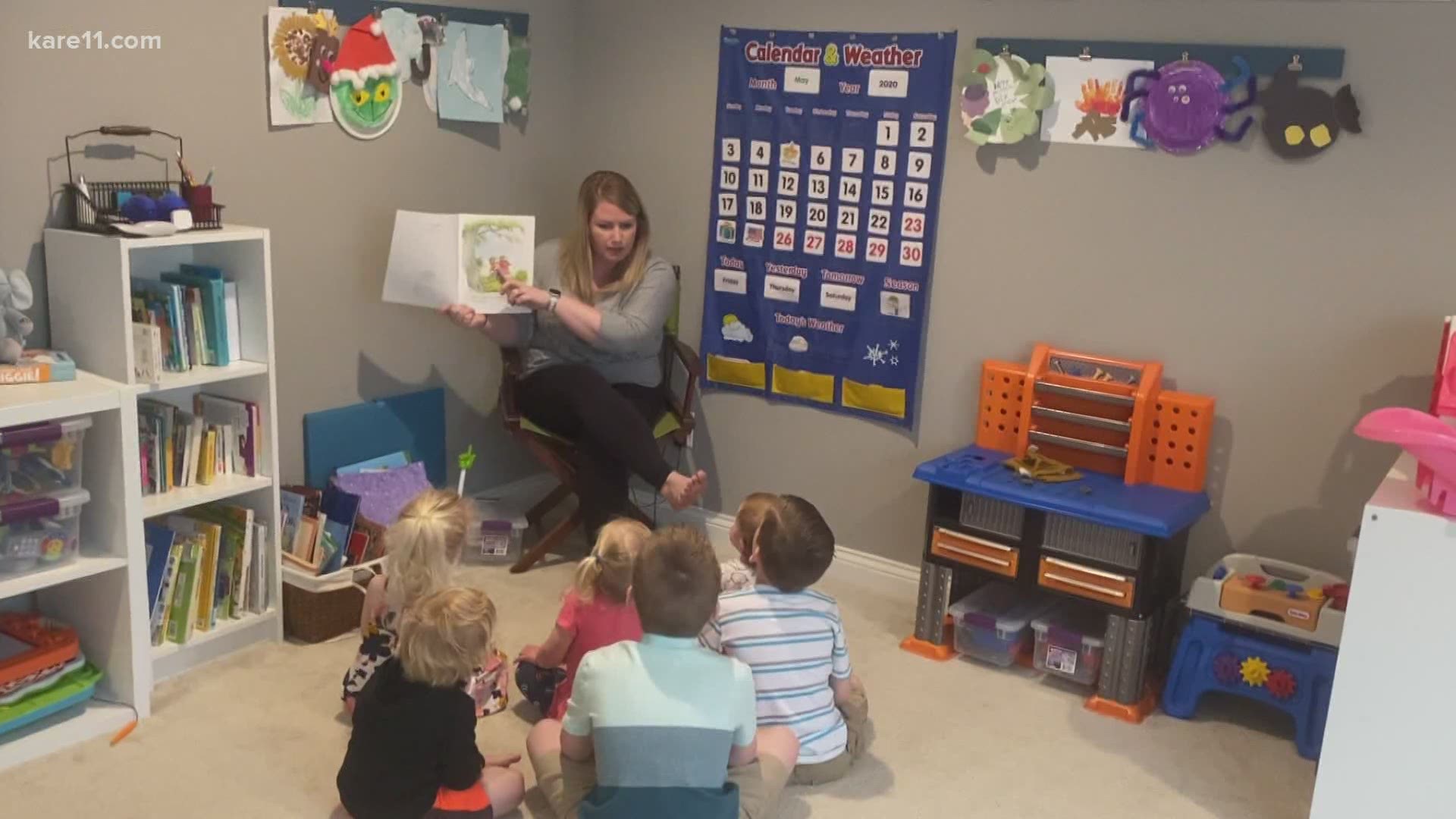 JANESVILLE, Minn — Like so many family daycares across Minnesota, Jena Mulcahey already had a tough time staying afloat financially. Then coronavirus hit in the spring, and the number of kids in her care went from nine to one.

She was going to close, but changed her mind after Gov. Tim Walz made a plea to the state’s providers: stay open for children of essential workers.

“We would appreciate if you continued to care for kids and their families and would like to support you if you decide to remain open,” he wrote in an email to them on March 16.

“We were counting on that help,” she said. “We were told everything was going to be OK.”

She’s not alone. Mulcahey is one of thousands of daycare providers who kept their doors open expecting financial help, but instead got nothing, KARE 11 Investigates has found.

In March, the legislature approved a $30 million child care grant package, which was to go to providers who “prioritize spaces in their program for children of essential workers.” The decision was later made to provide funding through three rounds.

Through two rounds of funding, the agency that’s administered the money, the Department of Human Services, has denied more than 7,000 applications, including from providers who care for children of essential workers – also called Tier 1 children.

“It makes my blood boil,” said Julie Seydel, the public policy director for the Minnesota Association of Child Care Professionals.

Seydel said that without the grant funding, providers across the state are struggling to stay open, including her own. She said she’s losing about $600 a week after going from 12 kids to two.

“We’ve got some providers who haven’t been able to make their house payments,” she said.

Making the sting worse: had she and other providers closed, they could have made more money through unemployment.

“They asked us to step up. We stepped up,” Seydel said. “We are putting our families in jeopardy by having multiple children, multiple families every single day.”

And though providers like Seydel said they’ve asked for answers as to why they haven’t received the grant funding, they’ve received little response.

Providers not getting answers

After approving the grant funding, the legislature left the specific funding criteria up to DHS and a non-profit agency ChildCare Aware, a daycare advocacy group.

The metrics they created for the first round of funding relied heavily on a daycare’s proximity to essential workers and facilities, such as hospitals and prisons. While the legislature mandated that the money go to providers who “would be financially at risk without a grant,” there were no metrics that specifically measured that.

The result: only about one in five of the applicants received funding during the first round.

ChildCare Aware, which received $450,000 to administer the grants, was “deluged with thousands of emails and calls, understandably from people upset,” agency director Ann McCully told a state senate committee in April.

The MMB said in a statement: “The Peacetime Emergency Child Care Grants ensure access to child care for critical workers during the COVID-19 public health emergency. We distributed nearly $20 million in 2,650 grants to family child care and child care center providers across the state, and we are in our third round of accepting applications. We know the need for funding is great and we’re doing everything we can to identify additional resources.”

Records provided to KARE 11 show that funding was denied to more 3,900 providers who said they cared for Tier 1 children during the first round.

The data also show a confusing scoring system, with thousands of providers who got rejected despite having the same scores as those who received the money.

A high score didn’t guarantee success – and a low score didn’t mean failure. Out of a top score of 21, grants were denied to nearly 100 providers that scored at least 15.

At the same time, providers who scored as low as 8 received money.

“They are picking and choosing who is going to survive this crisis,” Seydel said after reviewing the data.

The second round of funding was distributed on June 5, which saw another $10 million go out to providers. DHS and ChildCare Aware said about a third of the 4,600 applicants were awarded.

About 770 won on both rounds, ChildCare Aware said – meaning thousands were left out.

Credit: KARE 11
Anna Brynteson applied for funding but was denied.

That includes providers like Anna Brynteson, who is baffled as to why she has twice been denied. She operates in Savage, about 10 miles from two hospitals, is in close proximity to police and fire stations, and has served Tier 1 children.

“It’s obviously very frustrating,” she said. “It felt like the state was saying: ‘If you take on kids of essential providers, don’t worry, we’ll take care of you.’”

One of the lawmakers who worked on the funding bill, Rep. Dave Pinto, D-St. Paul, said he understands the daycare providers’ frustrations.

He said there wasn’t enough money to go around during the first two rounds because there were far more grant applications than expected.

“We just need to provide more support,” Pinto said. "This is a huge crisis."

Help should be coming for some. Applications closed Monday at 5 p.m. for a third round of funding, which DHS increased by an extra $10 million with the help of a federal grant. The scoring metrics were also changed, so that now the top measure looks at financial risk, giving lower scores to applicants who have already received funding.

Providers like Brynteson and Seydel say they’ve applied, but are not optimistic. DHS also expanded the eligibility criteria, with more than 100 additional programs now eligible.

Seydel said if she receives nothing after all three rounds, “then it was a complete bait and switch.”

Our investigation started with a tip. If you have a suggestion, or want to blow the whistle on government fraud, waste, or corruption, email us at:  investigations@kare11.com