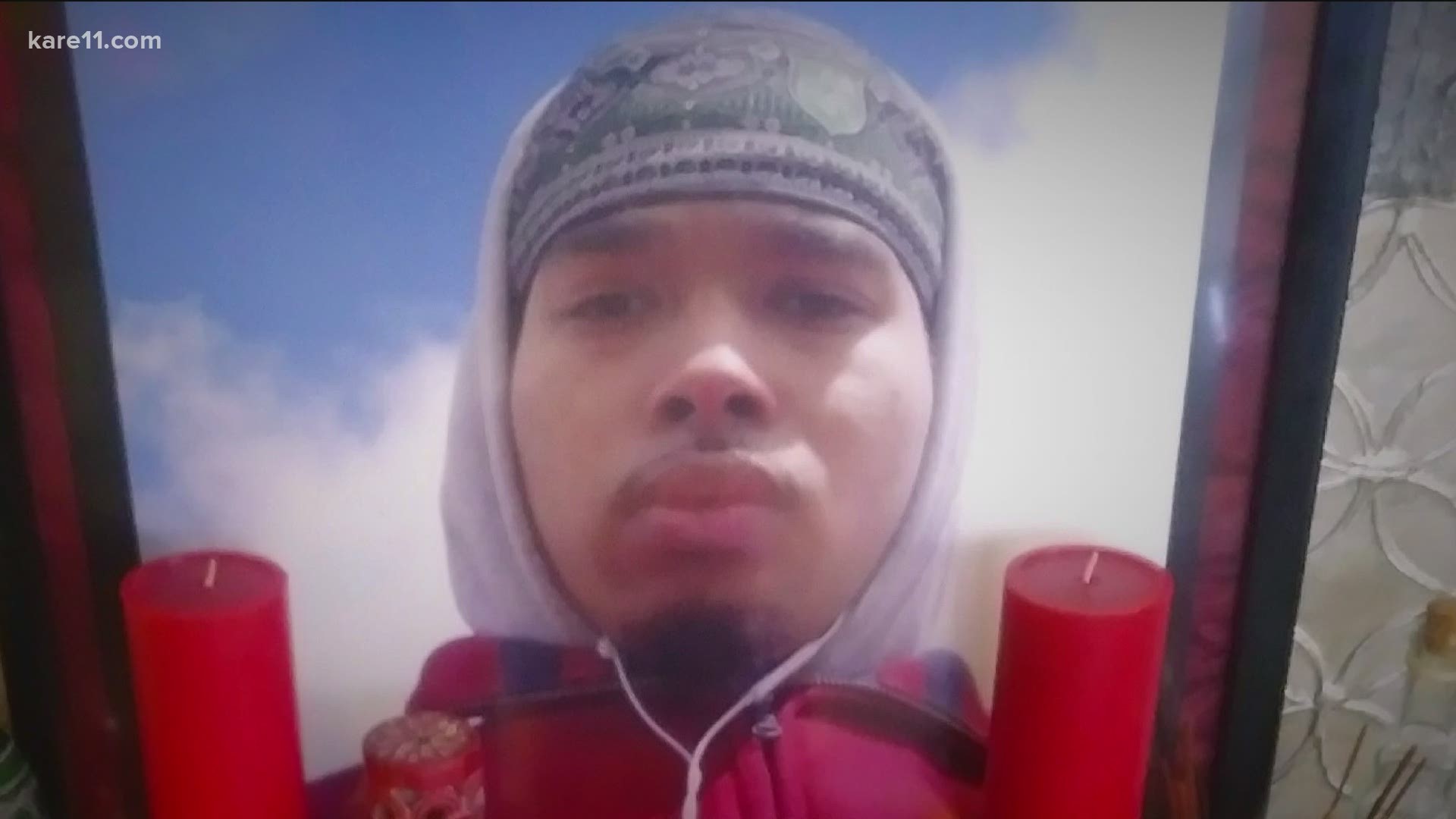 Tybetha Prosper knelt on the prayer rug strewn on the grass, across the street from the hospital where her son died, to tell his story with the agony and rage only a grieving mother can.

“Everybody involved needs to be held accountable for what happened to my son,” she said.

A KARE 11 investigation reveals that her son – Naajikhan Adonis Powell – is just the latest person to die after being taken to the Hennepin County jail.

In early September, after having an incident at a group home he asked to be taken to Hennepin Healthcare’s mental health department.

There he would stay for about a week until hospital staff discharged him – straight into the handcuffs of a Hennepin County sheriff’s deputy, who was there to arrest him for an outstanding warrant.

His offense: failing to complete earlier court-ordered treatment and take medication for his mental illness.

“They picked him up after he was trying to get help. Asking for help,” Powell’s mother told the other mourners at the vigil.

About four hours after his arrest, her son was found unconscious in a cell after an apparent suicide attempt.

He was rushed back to the hospital, but it was too late.

After doctors said his brain damage was too severe, his family chose to take him off life support six days later.

“Today was his birthday,” Prosper told the crowd at the vigil. He would have been 24 years old.

If he’d been checked on more often, she thinks it would have been impossible for him to harm himself.

“My son is gone because of this miscarriage of justice,” she said.

“My son went in there on his own to get help. And now he’s not here,” she said. “Something isn’t right.”

KARE 11 uncovered records showing a reoccurring theme of failures in Hennepin County – before Powell’s death – of inmates not being properly watched.

The result?  A pattern of deaths at the state’s largest jail, records and interviews show.

Powell’s was Hennepin’s 10th in-custody death of an inmate since 2015.

Credit: KARE 11
Since 2015 there have been 10 jail-related deaths in Hennepin County.

During that time, the Minnesota Department of Corrections (DOC), which licenses jails, has cited Hennepin County at least six times for improper well-being checks after inmates died at the jail and its workhouse, records show.

READ THE DEPARTMENT OF CORRECTIONS LETTERS ABOUT IMPROPER CHECKS:

In at least three cases, records show guards falsified logs to show they made checks that never happened.

In two other deaths, KARE 11 discovered there’s no record the state ever completed the legally mandated review.

A month after Powell died, the DOC sanctioned Hennepin County after the state agency completed its biennial inspection of the jail and found repeated failures to follow state law and properly supervise the inmates in its care.

Well-being checks are one of the most important safeguards a jail can take to prevent inmate harm, said Bill Hutton, Executive Director of the Minnesota Sheriff’s Association.

By law, well-being checks on each inmate at a jail need to be made once every 30 minutes. But for those inmates who are physically or mentally sick, checks should be done far more frequently.

Complying with those checks can save lives, said Hutton.

When the checks don’t happen, “there’s no excuse for it,” said Hutton, who also used to run a jail as a former Washington County Sheriff.

Credit: KARE 11
Margo Frasier says well-being checks can be the difference between life and death.

Margo Frasier, a law enforcement and corrections expert who consults for the U.S. Department of Justice, agreed. She said well-being checks are one of the most important safeguards to prevent inmate harm.

“(They) literally can result in the difference between life and death,” she said.

While most of the deaths KARE 11 reviewed at the Hennepin County Jail happened under the watch of previous Sheriff Rick Stanek, the problem continued under current Sheriff David Hutchinson. Three inmates have died after he took over. He was also the sheriff when the DOC sanctioned the jail after the 2020 biennial inspection.

For months KARE 11 has made repeated interview requests to Hutchinson for this story, but he has refused.

Instead a spokesman sent a lengthy statement about reform measures being implemented. They include a requirement for checks to be done every 25 minutes, with deputies to remain at the cell “until clear signs of life are seen.”

“Nothing is more important to the men and women who work in our Public Safety Facility than keeping people safe and we’re confident these action steps will result in more thorough, timely and effective well-being checks in our facility,” Hutchinson’s spokesman said in the statement.

The DOC lifted the sanctions in late December after the county presented its reform plans.

The high cost of failure

In the last 10 years, Minnesota counties have paid out nearly $13 million in settlements and legal fees following lawsuits accusing jails of providing inadequate to non-existent health care to inmates, with many of those cases involving failed well-being checks.

That total includes a settlement late last year in which Sherburne County agreed to pay $1.3 million in a case that alleged jailers failed to do proper well-being checks before an inmate died by suicide.

It’s not easy to win one of these cases. Plaintiffs must show that jailers not only failed to do a well-being check but did so with deliberate indifference.

Bob and Janice Kellermeier explored a lawsuit following the death of their son, 26-year-old Robert Jr., who was booked into the Hennepin jail in late May 2017. Records show he was held on an arrest warrant from Wisconsin. He was at the jail for five days before hanging himself in his cell with a bed sheet.

Credit: KARE 11
Bob and Janice Kellermeier believe their son was a victim of poor safety checks.

Jail staff knew Kellermeier Jr., was an opioid addict and were supposed to be monitoring his withdrawal from heroin, according to records.

Yet a DOC review found that “most of the health and welfare checks leading up to the discovery of Mr. Kellermeier are out of compliance with both facility policy and (state law).”

Among the examples cited: a correctional officer failed to look into each cell and at times looked down at the floor instead of at the inmate. Other times, the officer looked at the cell so fast it would have been difficult to determine if Kellermeier was actually alive.

The DOC also found that a staff nurse lied during a sheriff’s investigation when he said he spoke with Kellermeier Jr., through the glass of his cell prior to his death, records show.

“No conversation took place between the nurse and Mr. Kellermeier at that time,” the DOC concluded.

Although the records show that Kellermeier’s jailers repeatedly failed to properly check on him, an attorney who reviewed the file told the family it would be difficult to win a lawsuit.

Why? According to the records, Kellermeier never gave an indication that he was suicidal. Because of that, the attorney felt it would be difficult to prove the jailers deliberately ignored his mental health needs.

Credit: KARE 11
Robert Kellermeier's parents believe he took his life while in withdrawal from heroin,

Although a nurse wrote there were “no indications of withdrawals” while he was in jail, Kellermeier’s parents believe their son killed himself because he was withdrawing from heroin. Had the proper well-being checks been done on him, he would still be alive, they believe.

“The purpose of the guards and the nursing staff and all that checking on them is to determine if they are OK or what they need – it’s not the cursory just walk by because we have to walk by,” Kellermeier’s father said. “And if they’re not doing that, this is what happens.”

Sadly, more deaths followed Kellermeier’s, with the DOC repeatedly finding failed well-being checks, according to records. Among those:

Arrested at the hospital

State rules require each inmate be checked on “at least once every 30 minutes.” They call for “more frequent observation” for inmates who are potentially suicidal, mentally ill or experiencing withdrawal.

The sheriff’s department told KARE 11 that when Powell was arrested the hospital sent paperwork with deputies advising that he was a “moderate risk” for suicide. However, a spokesman wrote that “moderate risk” is “not a classification recognized by ADC (Adult Detention Center) staff.”

Records show a jail nurse questioned Powell and “he denied being suicidal.”

So, he was placed on “standard 30-minute well-being checks” rather than a more frequent observation schedule as called for by the state.

In addition to the “moderate risk” warning from the hospital, records show the department knew – or should have known – that Powell battled mental illness and needed to be under close observation.

Remember, he was arrested as he was being released from the hospital’s mental health unit. His arrest was based on a warrant which said he had failed to complete earlier court-ordered treatment and take required medication for his mental illness.

Before his arrest in 2020, court records show there had been at least three different civil commitment orders – in 2016, 2018 and 2019 – mandating mental health treatment for Powell.

The same day he was arrested, about two hours before he was found dead in his cell, the Hennepin County Human Services Department was back in court – petitioning a judge to have him committed a fourth time for mental illness. They told a judge he was homeless and at the county jail and “is posing a risk of harm due to mental illness.”

The jail’s on-duty sergeant was copied on that new court filing, records show.

The state review of Powell’s death found a violation because of a late safety check but decided it did not play a role in his death.

And since a nurse interviewed Powell, the DOC did not rule on whether he should have been placed on more frequent observation because of his mental health diagnosis. The department says state rules only allow it to review “whether medical care was given” – adding they do “not determine whether the medical care given was appropriate.”

As Powell’s mother held a vigil in front of the hospital where her son had been admitted to the mental health unit days before his death, she said she believed he was crying out for care.

“This should never be a death sentence when you’re trying to get mental health support and care,” she said.