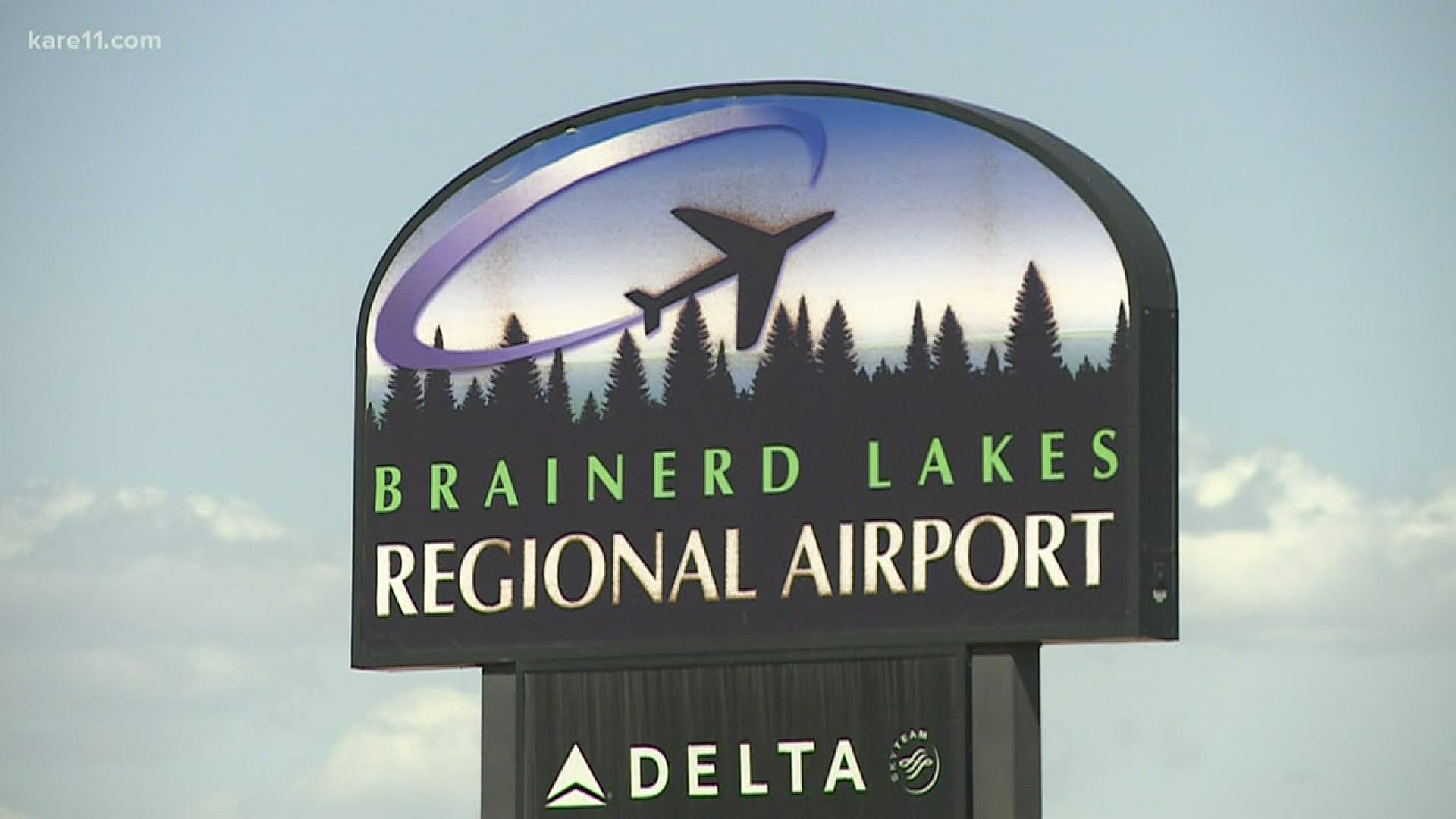 Aviation industry experts are pointing to what they call a serious flaw in the way the federal government is using taxpayer money to bail out airports during the coronavirus crisis.

Congress approved $10 billion in aid to airports when it passed the Coronavirus Aid, Relief, and Economic Security (CARES) Act. Across Minnesota, 97 airports have been awarded more than $158 million according to Federal Aviation Administration (FAA) data.

The money is meant to keep the lights on, provide employees paychecks, and cover debt payments for airports crippled by the COVID-19 pandemic’s impact on travel.

But a KARE 11 investigation found the federal stimulus grants to airports were awarded disproportionately to some small airports because of what experts call a flaw in the FAA’s funding formula.

The small airport in Brainerd is a prime example.

The Brainerd Lakes Regional Airport in Crow Wing County, Minnesota normally handles just two commercial flights a day with 22,000 passenger boardings per year. It has seen a 95% decrease in traffic since the COVID-19 pandemic began.

Yet Brainerd is set to receive nearly $18 million in CARES Act funding, second only in Minnesota to Minneapolis-St. Paul International Airport.

That is more money than all the other airports in Minnesota combined.

From his perspective, there is plenty of reason to smile. The $18 million grant is enough to fund the Brainerd airport’s operating expenses at current levels for the next 18 years.

“Were you expecting any sort of windfall like this?” asked KARE 11 investigative reporter A.J. Lagoe.

“No, no,” replied Wright. He had worried that Brainerd’s airport might be cut out of the federal grants when he applied.

“What the heck is going on?”

What’s cause for celebration in Brainerd has many in the aviation industry shaking their heads.

"What the heck is going on?" long time airport consultant Mark Sixel remembers asking himself as he first began looking at the FAA’s list of grant awards.

“Whoa,” he said throwing his hands in the air. “Brainerd has got 18 million dollars, and Bemidji has one (million), and what happened?”

Credit: KARE 11
Consultant Mark Sixel says he was shocked when he saw the amount some small airports were given..

Larger airports in Rochester were awarded $2.4 million, and the airport in Duluth got $5 million.

Added together, those grants don’t come close to the $18 million given to Brainerd.

Credit: KARE 11
The COVID-19 crisis has resulted in parked planes and empty airports.

There are other examples of disproportionate windfalls for small airports in the Midwest. Mason City, Iowa is receiving $17.4 million – enough to cover the airport’s operating expenses for 29 years according to an analysis by Sixel.

The Devils Lake Regional Airport in North Dakota is set to get $16.8 million. According to the analysis Sixel provided to KARE 11, that’s enough funding to last 50 years.

Some larger airports aren’t even getting a year’s worth of funding.

Even though MSP handles millions of more passengers each year, it is set to receive enough funding to last just seven months.

Sixel says he spent several days pouring over the FAA data trying to figure out what happened. He says he found a flaw in the formula used to allocate the money that should have been spotted before the FAA ever published the grant amounts.

“I was always told smell your data,” said Sixel. “You’ve got to make sure your data smells correct before you send it out.”

“I don’t know if anybody at the FAA ever looked at it,” he added.

The formula used by the FAA to distribute $7.5 billion out of the total $10 billion in airport grants was based on a three-part criteria.  It involved the number of people who boarded planes at an airport in 2018, how much debt the airport had, and how that number relates to the airport’s cash reserves.

That final area, the ratio of cash reserve to debt is where Sixel says the problem lies.

Sixel pointed to some small airports that have a little bit of money in the bank and virtually no debt. He said that screws up the value calculation and the formula basically just gives an error code. From there, he says the FAA artificially inserted a number to remove the error and make the computation work.

“And that’s where we ran into some trouble,” said Sixel. “It skewed the results of the funding.”

He says airports like Brainerd did nothing wrong. They just happened to have some cash on hand and very little debt and because of the FAA calculations are now set to receive a windfall.

When KARE 11 requested an interview, a spokesperson in the FAA’s Office of Communications who asked not to be quoted by name, said the agency would not be doing any interviews. When asked if the FAA’s formula was flawed, the spokesperson responded, “No, I don’t believe it was flawed.”

However, some members of Congress disagree.

Rep. Steve Cohen, a Tennessee Democrat and senior member of the House Transportation and Infrastructure’s Subcommittee on Aviation called out “a severe funding flaw,” in a letter he sent late last month to the head of the FAA.

The Minneapolis-Saint Paul International Airport (MSP) is set to receive $125,174,962 by far the largest amount of any Minnesota airports. However, that equals just $6.82 per passenger.

Many of the big international passenger hubs such as Charlotte, Atlanta and JFK in New York are also set to receive less than $7 per passenger.

In contrast, Brainerd is receiving the equivalent of $807 per passenger.

Credit: KARE 11
Brainerd got much more aid per passenger than larger airports.

Nationwide, the Northern Colorado Regional Airport in Fort Collins is set to get the most money per passenger - $6,645.

In an email, the FAA spokesperson wrote, “Some airports will receive more money than others, despite having fewer enplanements. The number of enplaned passengers is only one of several metrics used to determine an airport’s business and financial situation.”

As questions were raised nationally about how the funds were dispersed, the FAA moved to cap the initial payout to cover four years of operating expenses.

For Brainerd that’s about $4 million. However, the airports are still able to get the remaining grant money they were awarded over the next four years by applying and demonstrating it’s going to worthwhile projects.

On the Bright Side

“We’re excited about it,” he said. “There are some projects that we need this money for, and the dollars will do a lot of good in this region.”

He added, on the bright side, the windfall means his airport – which plays a critical role in the area as a base for medical helicopters and DNR firefighting aircraft – won’t be hitting up local taxpayers anytime soon.

“We will never have to be dependent on local tax levy dollars,” he said.

Explore How Much Each Airport in the Country is Receiving Here

RELATED: KARE 11 Investigates: COVID becomes a leading cause of death in Minnesota