Dayton says he was shocked by a KARE 11 report that found most Minnesota school districts fail to follow government testing recommendations – if they test at all. 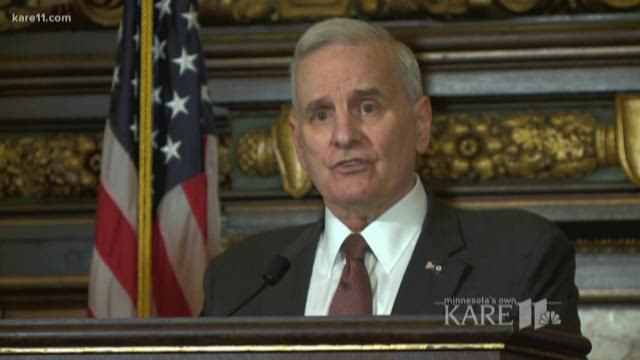 His comments came one day after a KARE 11 investigation found that only 53 of the state’s 331 school districts had reported testing for radon in the past five years. Some have never tested.

“It was a shocking report and first time I became aware of it,” Dayton said.

“It’s just absolutely disgraceful that some school districts you’ve found have not tested for radon ever – others not for 20 years,” Dayton told reporters.

Among non-smokers, the Centers for Disease Control and Prevention says radon is the leading cause of lung cancer. Medical research suggests that children are especially vulnerable.

Although the EPA and the State Department of Health recommend that all ground level classrooms be tested every five years, Minnesota does not require testing.

Dayton vowed to change that, asking his staff to see if they can add language to his emergency school funding plan being considered in the closing days of this year’s legislative session.

“If the legislature can’t act on it this session, I’ll look to see what we can do by executive order or other means to get something in place that requires schools to do this,” Dayton added.

“To have some hidden killer like this and school districts not to even bother to test for it is just disgraceful,” he said.

Denise Specht, President of Education Minnesota, which represents teachers statewide, issued a statement urging school districts “to take this report seriously and test their buildings for radon as quickly as possible."

“Our kids deserve a safe place to go to school,” said Representative Karen Clark (DFL- Dist. 62A), whose district includes parts of Minneapolis. The Minneapolis Public Schools told KARE 11 that most of their buildings had not been tested in 20 years.

“I think it’s very irresponsible,” Clark said. “Especially since we know that again radon is the number one, or number two source of lung cancer in our country and in Minnesota.”

As part of its investigation, KARE 11 surveyed the 20 largest Twin Cities area school districts to help parents determine which schools had been tested in the past five years.

Is your school district testing its buildings for radon, the leading cause of lung cancer among non-smokers? Search by district, school name or click on our interactive map to find out what the biggest Twin Cities area districts are – or are not – doing.

Wayzata School District is not included because it has not done any radon testing on its schools since 2009.

App Users! If you are having trouble seeing this map, Click Here