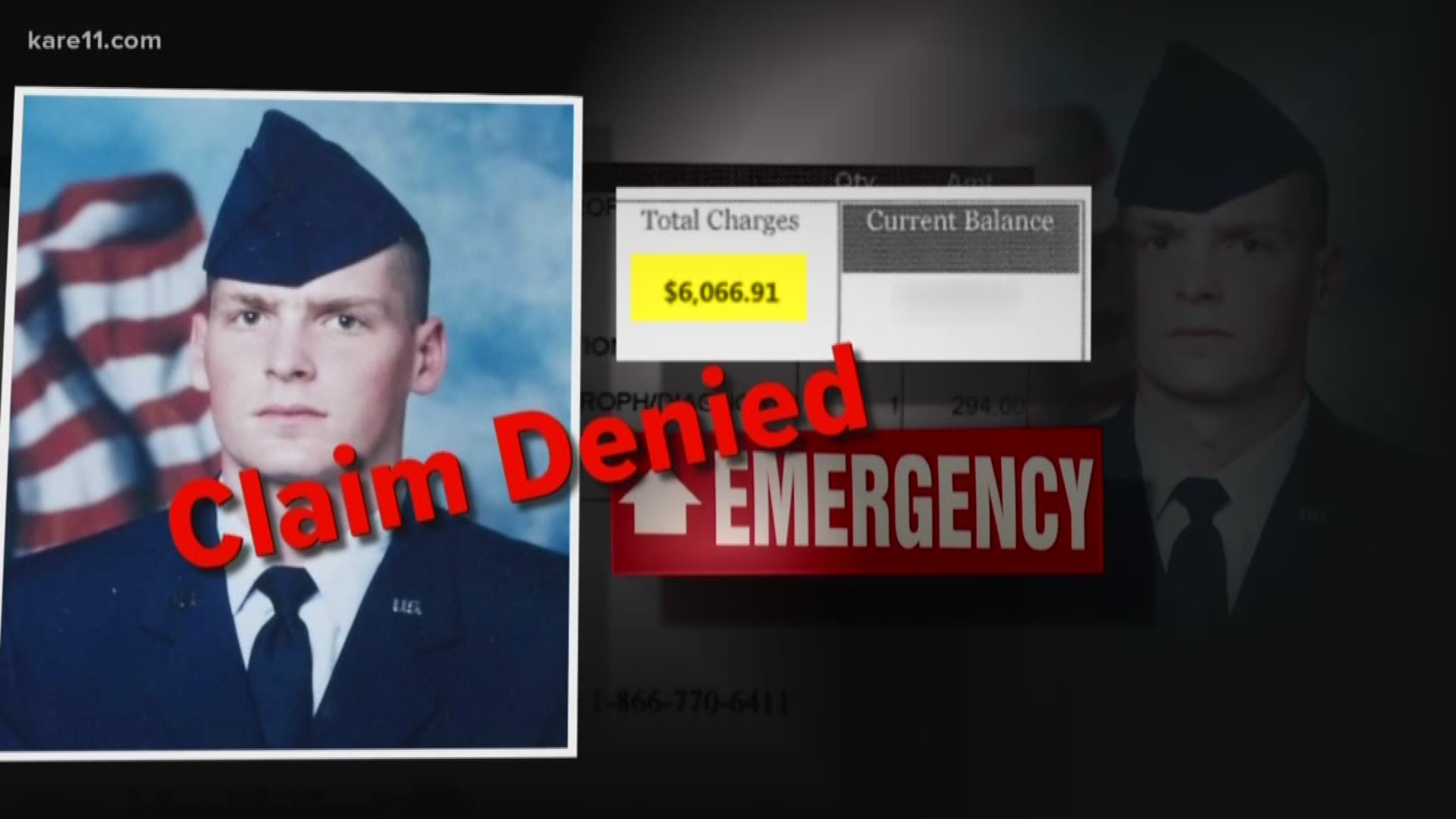 The OIG report audited emergency medical claims processed over a six-month period in 2017.  It found: “The billed amount of inappropriately processed claims from April 1 through September 30, 2017, that were denied or rejected was large in the aggregate—an estimated $716 million—and presented potential undue financial risk to an estimated 60,800 veterans.”

While not all claims-processing errors resulted in improper denials, the report estimated that 17,400 veterans with bills totaling at least $53.3 million were short-changed in that period alone.

The report was prompted by KARE 11’s Pattern of Denial investigation launched in 2017.  KARE 11 quoted VA whistleblowers who said it was faster to deny claims than to approve them.

“We are accountable for speed,” one VA insider told KARE 11. “And the faster you are, the more your performance goes up.”

The OIG report confirmed that disclosure. The audit found that the VA “placed more emphasis on the number of claims processed than the accuracy of the claims decisions.”

Although veterans can appeal denials, the Inspector General (OIG) estimated that if corrective action is not taken veterans could be saddled with "$533 million in improper underpayments to claimants over five years.”

VA staffers interviewed as part of the OIG investigation confirmed that fear. Claims processors told investigators the VA had created a culture of “systemic pressure to favor speed over accuracy.”

Some VA employees told investigators they were "verbally directed or encouraged to deny non-VA emergency claims" just to meet production goals.In addition, if examiners didn't meet their production goals they were not eligible for incentives such as overtime and bonuses. Even work from home privileges were tied to the quantity of claims processed.

What's more, investigators found that processing mistakes meant that veterans did not always receive accurate information about why their claims were being rejected.  Without that, veterans might not be able to respond with the additional information needed to approve their claims.

The new OIG report is just the latest warning about the VA's failure to handle emergency room bills.

“It was pretty much a pattern of a lot of errors,” GAO investigator Randy Williamson told members of Congress during a 2014 hearing.

The GAO found the Department of Veterans Affairs was mishandling veteran’s emergency medical bill claims and improperly denying claims that should have been approved.

“Some veterans were likely billed for care that VA should have paid for,” Williamson told members of the House Veterans Affairs Committee.

“We found that basically VA was doing a very poor job,” Williamson recalls. “And they were erroneously denying claims.”

At the request of Congress, the GAO set out to determine how well the Department of Veterans Affairs was complying with the Federal Millennium Act which requires the VA, with a few exceptions, to cover the cost of emergency care for veterans at non-VA hospitals.

Williamson and his team discovered VA staffers breaking rules and leaving veterans financially liable for bills VA should have paid.

“Twenty percent of the cases we looked at were wrong, were denied inappropriately,” Williamson said.

The GAO found that clerks were denying medical bills without a qualified clinician reviewing them. The investigation also documented cases in which the VA had given veterans pre-approval to go to an outside hospital, but later denied their claim as unauthorized.

In some cases, there’s more at stake than veterans getting stuck with medical bills they shouldn’t owe.

The GAO also found the wrongful denials were prompting some veterans to take dangerous risks.

Fearing they might be stuck with an emergency bill the VA would not pay, veterans were by-passing the closest emergency room to drive miles to a VA facility.

“One veteran with a gunshot wound had his wife drive him to a Veterans hospital a hundred miles away, rather than go to the nearest facility in the community,” Williamson said.

“Because the veteran thought he would be on the hook for the bill and he didn’t want to do that,” Williamson replied.

Why was it happening?

“They looked at the timeliness of the claim processing, but they didn’t look at the appropriateness of the denials,” Williamson told KARE 11.

“Nobody was checking?” Lagoe asked.

Despite the red flags the GAO raised to both the Department of Veterans Affairs and Congress, VA insiders told KARE 11 that little changed when we began investigating continuing problems. They said the focus remained on speed with little thought to accuracy.

A VA employee turned whistleblower spoke with KARE 11 in 2017 on the condition that we not use his last name. Joe had seen our reports and told us he had a painful confession to make.

Joe told reporter A. J. Lagoe he was troubled because he believes there are a lot of veterans who have been stuck with emergency medical bills the VA should have paid.

Lagoe: “You know for a 100% fact that there are claims being done incorrectly?”

Lagoe: “Because you’ve done them incorrectly?”

That admission is in direct conflict with Joe’s 2016 VA Employee Performance Appraisal.  In glowing terms, it rated him an “exceptional” employee.  A supervisor wrote that Joe maintained an “excellent claims processing accuracy average at 99% which exceeds the national standard for the exceptional rating.”

Lagoe: “How do they monitor errors?”

Instead Joe said the VA’s emphasis tracks how many claims its examiners complete each hour.

“We are accountable for speed,” Joe told KARE 11. “And the faster you are, the more your performance goes up.  Your review does, you get a bonus.”

Joe’s 2016 performance review shows that in order to be rated exceptional, a claims examiner needed to hit a “production target” of 22 claims reviewed in an hour when handling emergency medical claims.

To meet that goal, on average examiners can spend less than three minutes reviewing each claim.

In those few minutes, claims examiners must make a series of determinations. Is the cost covered by other insurance?  Was the veteran seen for a service-connected issue?  Should the veteran have gone to a VA hospital instead?  Or should the case be sent to a nurse to review whether it was a true emergency?

Lagoe: “Do you have time to do that?”

Lagoe: “Have you been doing that?

In fact, Joe says that in order to meet the quotas, it’s quicker to simply deny claims than to take the multiple steps needed to approve them.

The new report from by the VA's Inspector General confirms that Joe was not alone in his concern. After surveying hundreds of VA workers who processed claims the investigators concluded:  "Overall, the responses showed that the claims-processing environment focused on production and prioritized quantity over quality.”

VA appreciates the inspector general’s oversight, which in this case highlights claims processed up to more than two years ago. Prior to the report’s release, VA had self-identified the majority of the IG’s concerns, starting numerous efforts to fix them more than a year ago. These efforts include:

VA is reviewing the sample claims related to other health insurance highlighted in the report and will notify affected Veterans regarding their options for corrective payments and/or financial reporting revisions.