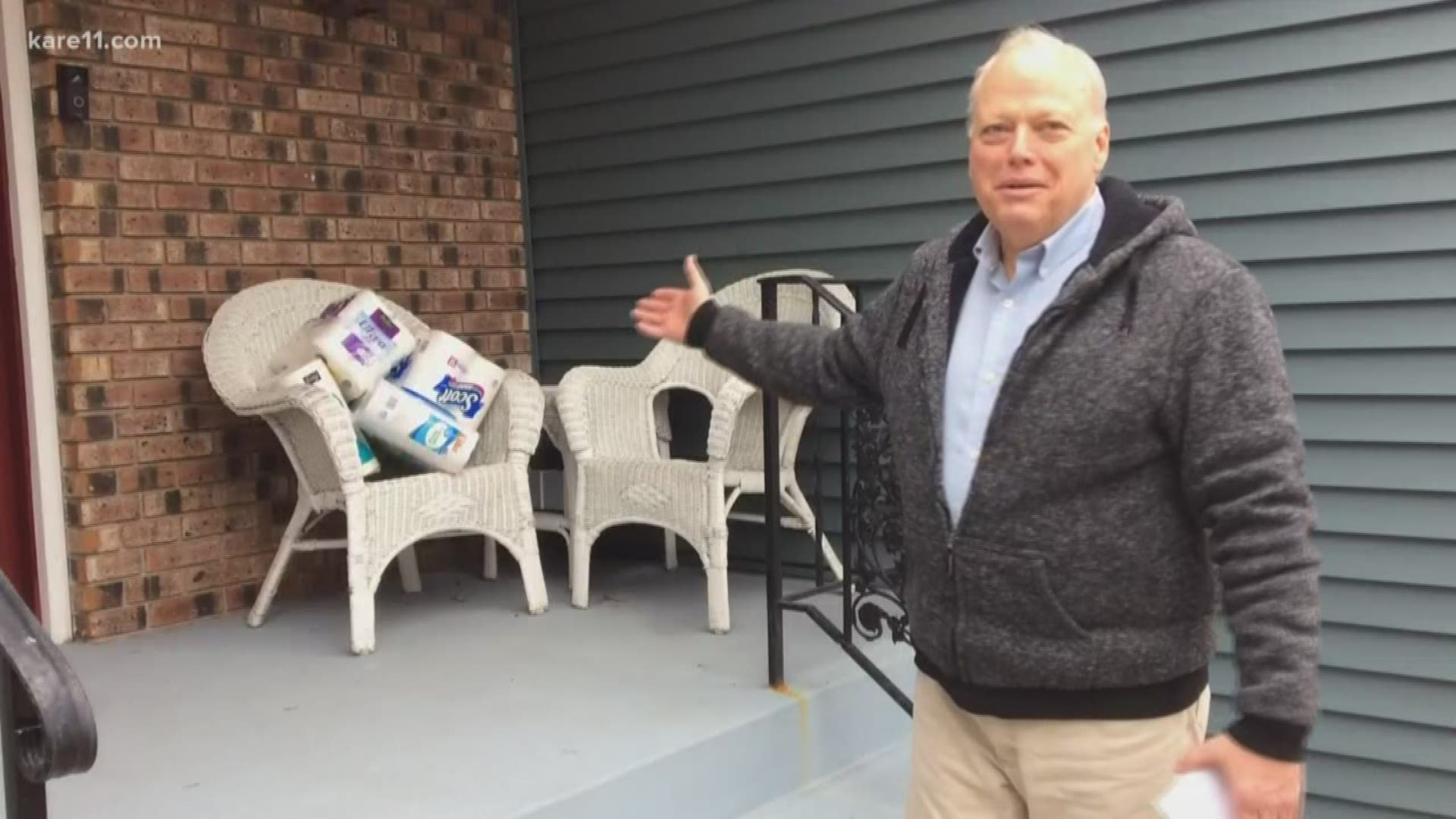 SOUTH ST PAUL, Minn. — Normally when your house gets t-p’d it’s not the good kind of surprise.

But for John Stone, it was the most welcome kind of surprise.

“This helps a lot,” he said with a big smile.

“Not just once, but three times I came to my door with people with generous smiles on their faces, holding a gift behind their back,” John said. “I would open up the door and they would say, ‘We saw you on TV.’

The gifts were packages of toilet paper.

KARE 11 Investigates has been exposing scams and price gouging related to the COVID-19 crisis.

John had reached out to KARE 11 after mistakenly paying nearly $10 a roll for toilet paper on eBay.

“You think you were the victim of price gouging?” asked investigative reporter A.J. Lagoe.

So, he went on eBay where he saw someone selling what he thought was a four-roll package.

He ordered four, thinking his family would be set for a while in case the COVID-19 crisis dragged on.

However, when he checked his receipt, he noticed he’d been mistaken about what he ordered and paid for.

“I was getting four single rolls of toilet paper each one costing me $10,” he said.  “And to add insult to injury I looked on my PayPal account and realized I was also being charged an additional $20 for shipping.”

His four rolls of toilet paper had cost him $60.

KARE 11 is working to identify and expose coronavirus related scams and price gouging.  It you have an example CLICK HERE.

Feeling taken advantage of after realizing he was being charged nearly $10 a roll, John turned to eBay and asked to cancel his purchase.

But he says he was told it was too late, his order had already shipped March 16th.

Frustrated but resigned, John kept checking his mail, watching. More than a week passed, and the toilet paper never arrived.

“I’m still waiting,” he said with a sigh.

KARE 11’s investigative team looked into John’s order and found a shipping label was created with the USPS on March 16th in Avondale, AZ.

But even though nine days had passed, the toilet paper had not actually been shipped.

KARE 11 tracked the eBay seller, ‘cubswon2016’ back to the address of an Avondale home and asked a reporter from our sister station in Phoenix to swing by.

When the reporter arrived, a man was standing in the open garage door.

The conversation was brief.

Reporter: “Can we ask you about the sales that you’ve made?”

The garage door then began going down.

Reporter: “Can I just ask you; do you think it’s fair to sell four rolls of toilet paper for $40?”

There was no answer.

When KARE 11 contacted the seller through eBay he did respond and claimed he was the victim of price gouging himself.

As for why he had not mailed out the toilet paper he sold, he claimed he didn’t feel right about it.

“So rather than sending it off and forgetting about it,” he wrote, “I’ve been buying a little bit of toilet paper here and there so I can double or triple the order and be helpful rather than hurtful.”

He then promised to cancel the order and refund John his money.

Five days later, John says he has still not received the refund or the high-priced toilet paper.

But he has now received a bunch – for free!

That garage door slamming on questions in Arizona, led to open hearts in South St. Paul.

“I would open up the door and they would say, ‘We saw you on TV,” John said of the folks who began showing up at his door the morning after his story aired on KARE 11.

“I didn’t think someone would break open a multi-pack and sell them off one at a time,” John said. He added, “I also didn’t think people would stop by with multi-packs and just give them to us.”

John’s wife has a compromised immune system, so they’ve been trying hard to stay home and avoid in-person shopping as much as possible so as not to risk her health during the coronavirus outbreak.

The couple received so many packages of toilet paper, they’re now looking to help others facing a shortage.

In front of their home, the couple has a Little Free Library and a crafting box to give away art supplies for neighborhood kids.

They’re now adding some of the rolls they were given to that give-away in case other families in their neighborhood find themselves in need.

“What we don’t want to do is take someone else’s generosity,” John said, “or three other people’s generosity, and hold it out for ourselves.”

John says the kindness during COVID-19 won’t stop with him.

“Pay it forward is the idea,” he said.

RELATED: Am I considered an essential worker under Minnesota's 'Stay at Home' order?