Refunds now total more than $1.4 million in the wake of a KARE 11 investigation of police car overcharges. 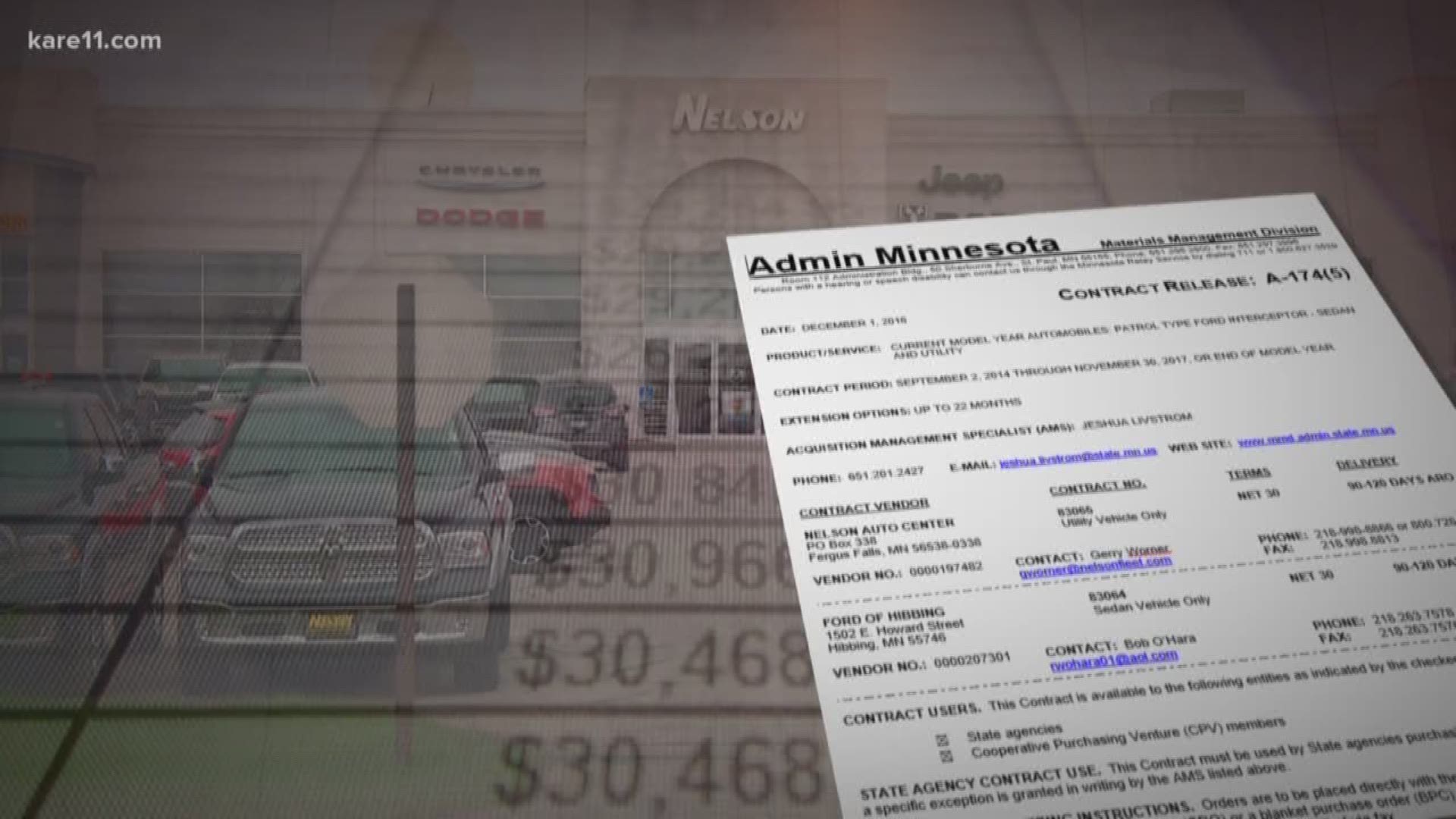 ST PAUL, Minn. — A Minnesota auto dealer has been ordered to refund an additional quarter of a million dollars in connection with police car overcharges first exposed in a KARE 11 investigation.

That amount is in addition to more than a million dollars the dealership has already repaid in the wake of a multi-year KARE 11 investigation that exposed a complex scheme to rip-off more than 230 Minnesota police and sheriff’s departments.

In 2017, KARE 11 revealed how Minnesota taxpayers were being overcharged for features on police vehicles that either were not there – or in many cases were paid for twice.

After our reports, the state Bureau of Criminal Apprehension launched its own investigation.

Gerry Worner, Nelson Auto’s long-time fleet manager, was fired and later charged in a multi-year scheme of Theft by Swindle.

Worner made a 40 percent commission on all profits, and the prosecutor said every overcharge put money in his pocket.

“Unfortunately, it went on for quite some time,” said Otter Tail County Attorney Michelle Eldien.

Worner pleaded guilty as part of a plea deal and was sentenced in July 2018.

BCA interviews during the investigation revealed that other lower ranking dealership employees knew about the double billing, but no one else faced criminal charges.

Dealership owners Brent and Laurel Nelson said they had no knowledge of – and didn’t approve – the overcharges. “I’m sick with what happened here totally,” Brent Nelson told the BCA in a recorded interview.

The Department of Administration conducted an audit of Nelson Auto’s sales. It found that from 2010 to 2017, Nelson Auto overcharged law enforcement by $803,309 on 3,225 different police vehicles sold to more than 200 agencies.

But KARE 11’s investigation did not end – even when those refund checks started going out.

After the state completed its audit, KARE 11 made an "Open Records" request for copies of some of the invoices investigators had obtained from Nelson Auto. Never before seen by the public, the invoices show what Ford charged the dealership for a car and then what the dealership charged police.

“These numbers don’t match,” said Steve Kleiber. “Not even close!”

Retired now, Steve Kleiber has a background in both fleet sales and law enforcement. He is also the man who helped KARE 11 uncover the double billing scheme two years ago.

KARE 11 asked him to review the invoices we obtained.

“Can you tell us based on these invoices what the profit made by Nelson Auto was?” reporter A. J. Lagoe asked.

“So, they made a total of $1,143.87 profit on this one vehicle,” Kleiber said after crunching the numbers for an SUV sold to St. Louis Park.

That’s significant because Nelson Auto won the state contract by saying it would make a fixed profit of just $224.94 per SUV. It’s called the “Total Bid Constant” or “TBC” and the contract defines it as “All dealer profit.”

So, the Department of Administration reopened its investigation and demanded Nelson Auto make hundreds of thousands of dollars in additional refunds.

In late December 2018, the issue went to arbitration.

According to the arbitration award Nelson Auto must pay back more money to both police departments and to Ford.

Judge Boylan ruled that an additional $190,958 must go to Minnesota law enforcement agencies for overcharges and the dealership must reimburse Ford Motor Corporation $36,036 for improper rebates the dealership received.

As part of the arbitration, Nelson Auto also agreed to no longer engage in vehicle sales to the Department of Administration or its Cooperative Purchasing Venture (CPV) program.

“This ruling marks the culmination of efforts by the State of Minnesota to ensure that Nelson Auto Center, Inc. pays back fraudulent charges to state and local agencies,” said Dept of Administration Assistant Commissioner Curt Yoakum. He added, “The department appreciates Judge Boylan’s assistance in bringing resolution to this matter. Moving forward, the department remains committed to providing the best value contracts to state and local governments.”

If you want to blow the whistle on government waste or corruption or know about something else we should investigate, email us at: investigations@kare11.com