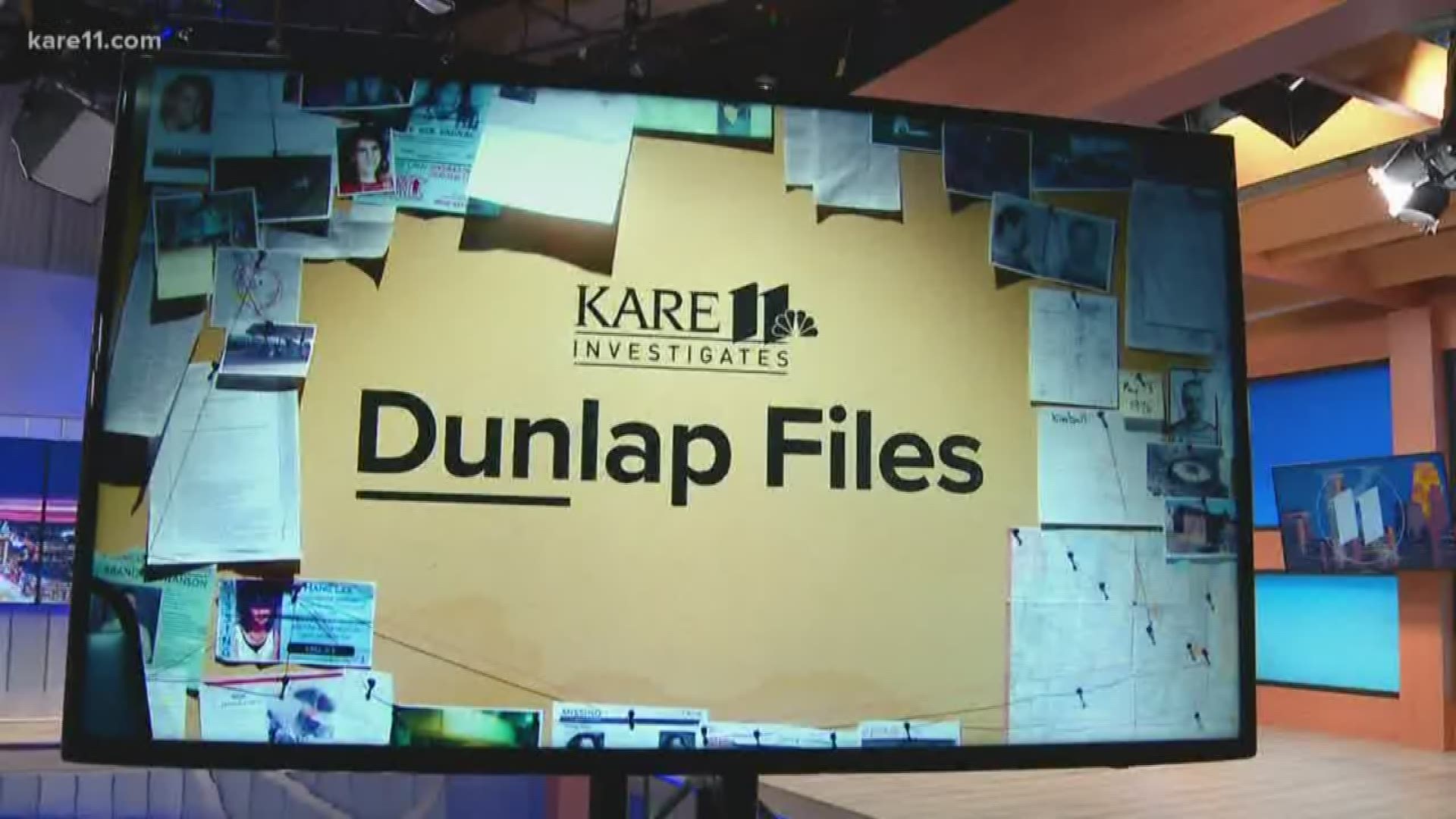 MINNEAPOLIS — A young woman goes missing just before New Year’s Eve 1995. Days later, her body is discovered in the trunk of her car.

Police said her husband was a suspect, but he was never arrested. Neither was anyone else.

Now, KARE 11 Investigates has obtained previously undisclosed records that reveal new details about one of Minnesota’s most notorious unsolved crimes.

The newly disclosed documents include an FBI analysis of the case, police crime scene reports, and DNA testing on a possible murder weapon.

Anne Barber Dunlap was 31, married, and a successful marketing manager at Pillsbury.

Credit: KARE
Anne Barber Dunlap was 31 when she disappeared.

But just two days later, the missing posters Brad and Anne’s friends had distributed came down. In their place, reward posters went up.

Anne’s body was discovered in the trunk of her maroon Toyota on New Year’s Day 1996. She had been stabbed to death.

Credit: KARE
Anne’s Toyota was found in a Kmart parking lot, her body later discovered in the trunk.

Her car had been abandoned in very public place – in a Kmart parking lot in south Minneapolis – with the keys still in the ignition. That prompted speculation that the killer left the keys in car hoping someone would steal it and drive off, further masking the crime.

“We just want to find her and bring her home,” Brad Dunlap told KARE 11 before her body was discovered. He denied any involvement in Anne’s disappearance.

The couple had been married eight years, living what seemed like a dream come true. “We're building a brand new home in Medina, it's our dream home. We're planning a family,” Dunlap said told reporters at the time.

But after her body was found, police considered Brad a suspect. In fact, a front-page story in the local newspaper listed him as the “prime suspect” in Anne’s murder.

But across the street at Federal Court, documents related to the case have been unsealed. They reveal stunning new details about the mysterious murder.

The newly released documents are part of a decades-old lawsuit in which a life insurance company argued it should not have to pay Anne Dunlap’s husband.

Credit: Dunlap Family
Anne and Brad Dunlap had been married eight years and were building a new home.

Although Brad Dunlap never faced criminal charges, the Chubb Life Insurance Company claimed in court that he was responsible for her death.

Records show Brad Dunlap had taken out a million-dollar life insurance policy on Anne before her death.

In court filings, Chubb alleged that Brad Dunlap “intended to murder Anne” when he took out the life insurance policy. The insurance company claimed that “Bradley A. Dunlap killed Anne Dunlap on December 30, 1995 as part of a plan to obtain the Chubb Life policy insurance proceeds.”

Therefore, the insurance company argued the life insurance policy was “fraudulent” and should be “void.”

Although the lawsuit was widely reported at the time, most of the documents filed in the case were hidden from public view.

Since police were still actively investigating the murder, the documents disclosing details about the case were filed under seal.

More than two decades later, many of those files have been unsealed – revealing new details about the case.

As the insurance company attempted to prove it shouldn’t have to pay on the policy, Chubb submitted a sworn statement from Sgt. David Voss, the lead Minneapolis police department homicide investigator at the time.

In his affidavit, never disclosed before, Voss called Brad Dunlap “the only plausible suspect” and claimed his “motive” was to cash in on the “$1,000,000 in life insurance benefits” through the Chubb policy.

Voss wrote that he suspected Dunlap from the day police first interviewed him. “It was Mr. Dunlap’s conduct during this video taped interview which prompted me to consider him as a suspect in the homicide,” Voss said in his affidavit.

The newly unsealed records also reveal the FBI was brought in to assist with the investigation.

Local authorities sent a copy of the videotaped interview and other information about the murder to FBI profilers asking for assistance.

Records show the FBI agents called Brad Dunlap “a viable suspect,” saying the crime must have been “committed by someone who knew the victim very well” and “staged the scene.”

Credit: KARE
Brad Dunlap spoke to reporters after Anne’s car was found, but before her body was discovered.

The FBI profilers even travelled to Minneapolis to help interview Anne’s parents. Donn and Louise Barber stood by Brad, however.

“There is nothing that leads it to him. And we know him too well. He couldn’t grieve like he could, if he did it,” Donn Barber told KARE 11 in 1996.

A forensic pathologist who worked with the FBI’s behavioral sciences unit also reviewed the autopsy report in the case. Based on the stab wounds, he concluded the killer was “an intelligent and thinking individual, but an individual with no experience at killing.”

Brad told police Anne left to go shopping at Nordstrom at the Mall of America at about 2:30 in the afternoon the day she disappeared.

Before that, she had eaten brunch with friends. They snapped a photo – the last known picture of her.

Credit: Dunlap Family
This photo shows Anne Dunlap with a friend at a brunch shortly before she disappeared.

The newly released records reveal that Investigators thought that meal was an important clue.

In a letter to an insurance company lawyer, the medical examiner wrote that the “food I found in her stomach” was consistent with what she’d “eaten at brunch.” Since the food was still in her stomach, Dr. Daniel Davis concluded Anne likely died the same day “within a few hours” of the brunch.

Watch below or click here: A raw, uncut interview Brad Dunlap did with KARE 11 the day Anne’s Toyota was found, but before police discovered her body in the trunk.

Bloodstains in the garage

When police searched the Minneapolis house where Brad and Anne had been living with her parents, they thought they’d found the crime scene.

“The human blood found, according to the BCA, was consistent with that of Anne Barber Dunlap,” said Sgt. Don Smulski in the days following the murder.

Back then, police announced they had found traces of blood in the garage. But Brad's supporters insisted it could have come from other family members.

However, the newly released lab reports say DNA tests on three blood stains found on the garage floor and one on the door matched Anne, but “do not match” the other family members.

This autopsy report details how Anne’s throat was cut repeatedly. There were stab wounds on the left side, right side and back of her neck.

The medical examiner wrote there was no evidence of sexual assault, eliminating that as a motive. And he found no evidence of defensive wounds, indicating Anne was not able to fight back.

Although the medical examiner found she bled to death in the trunk of the Toyota, reports say police did not find the type of blood spatter pattern they would expect to see if she had actually been stabbed there.

What’s more, the newly released reports say authorities did not find any bloodstains in the interior of the car.

A retired FBI agent who analyzed the crime scene reports for the insurance company concluded the “lack of blood inside the victim’s vehicle is significant as it reflects planning.”

Because of the multiple stab wounds, agent Gregg McCrary wrote that the killer’s clothes were “unquestionably drenched in blood.” As a result, “He could not have entered the victim’s car and driven it without getting transfer blood on the inside of that vehicle.”

McCrary concluded: “The most logical explanation for the lack of blood inside the victim’s vehicle is that the offender changed clothes and cleaned himself up before entering the vehicle and driving it to the K-Mart lot.” In his opinion, that indicated the murder was “planned and premeditated.”

The records reveal something else that has never been reported.

In the garage, the police found a bloodstained fireplace log. A lab report says Anne’s DNA was on that log, too.

In addition to the stab wounds, the medical examiner found evidence of a “blunt force blow to her head.” He concluded Anne was apparently hit with “something broad and flat.”

Was Anne knocked out – then stabbed?

“This is the first time I’ve ever heard about the fireplace log,” said Caroline Lowe, a former Twin Cities crime reporter who covered the case extensively in 1996 and still keeps tabs on it today.

“Those seem like critical pieces of their puzzle – that they think Anne was somehow knocked out, stunned, so whoever killed her could get control of her,” Lowe said.

Holes in the police theory

As fascinating as the new revelations are, the fact is Brad Dunlap has never been charged in this case.

And the newly released documents also reveal holes in the police theory.

For example, since police didn’t find blood spatter in the trunk of the Toyota, Anne was likely stabbed somewhere else first – then placed in the trunk.

If that happened in the garage, as police believed, forensic experts hired by Dunlap say "no evidence exists” of that type of extensive bleeding.

In a report, Bob Henderson wrote: “No evidence exists of projected blood stain patterns consistent with arterial bleeding, impact spatter, or cast-off blood stains in the Barber residence or on the garage floor, walls, or ceiling.”

What’s more, he added, “No evidence exists indicating that the floor of the garage was cleaned.”

And, of course, there’s one other problem. The murder weapon used to stab Anne was never found.

A forensic lab report notes that “a broken knife blade tip from a pocket knife” was found during the autopsy. It is described as a stainless steel piece of a “sheepfoot blade.”

So, if the weapon in her mysterious murder is ever found, authorities still have something to compare it to.

The documents also reveal new information about another mysterious clue the public knew about in the days after the murder.

Police had asked the public for help identifying the store that sold the Chippewa Springs water bottle found in the front passenger seat of Anne’s car.

It had a unique price tag which police soon traced to a Tom Thumb convenience store on Hwy. 55 and County Rd. 101, near the location of the home Brad and Anne were building.

Police reports show the store’s surveillance video captured an image of a man investigators thought might be Brad shortly after 6 p.m. the day Anne disappeared. A video analyst found it to match Brad.

The records also show that police also investigated other suspects – including several men thought to have been involved in other area kidnappings.

Meanwhile, Anne’s parents still stand behind him. On the recent anniversary of her death, the Barbers told KARE 11 they would like to see the killer brought to justice while they're still alive.

"And it would be a load off our dear Brad,” Louise Barber said. “Our son-in-law has gone through so much because of it."

The lawsuit between Chubb Insurance and Brad Dunlap was settled in 1998, but the terms were not disclosed.

Minneapolis Police didn't know the files had been released until KARE 11 asked them for comment. In a statement the department said although it respects the authority of the Federal Courts, since the case remains open "We would prefer that no documents would be released."

To learn more about the Dunlap case, read some of the complete documents recently unsealed:

If you have a story suggestion, or want to blow the whistle on government fraud, waste, or corruption, email us at: investigations@kare11.com