A carnival worker convicted of murdering two Maryland sisters in 1975 may be connected to the 1974 unsolved murders of the Reker sisters in Minnesota. 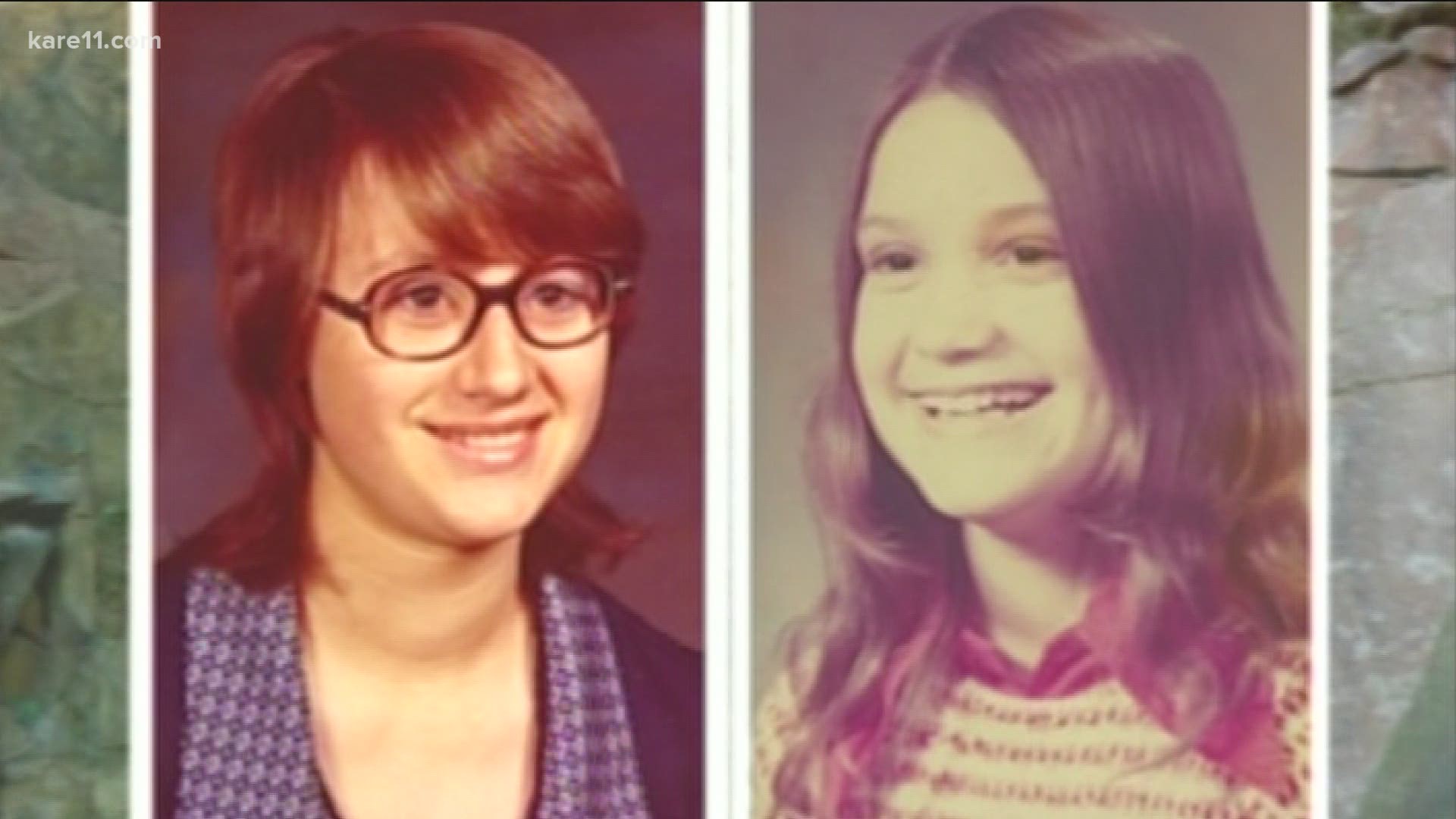 Georgianne says she was sexually assaulted 46-years ago near St. Cloud. The face of her attacker is still seared in her memory.

“He had a scar on his left eyebrow,” she remembered.

And she remembers him saying, “My name is Lloyd.”

Although local authorities doubt there's a connection, decades later Dreher is haunted by her belief that the same ‘Lloyd’ may have been involved in a mysterious Minnesota double murder that happened just days after she was attacked.

The Reker sisters – Mary, 15, and Susanne, just 12 – went missing. They were last seen walking to what was, back then, the Zayre’s Shopping Center in St. Cloud.

Credit: KARE 11
Authorities distributed this poster in 1974 when the Reker sisters disappeared.

The bodies of the sisters were found almost a month later at a nearby quarry. They had been stabbed repeatedly, authorities said.

Days before the Reker sisters disappeared, Georgianne says she was also attacked at knifepoint.

“He sliced up my pants,” she recalled. “That knife was sharp, it was like a razor.”

The story Dreher tells has striking similarities to the Reker case. She took KARE 11 back to the spot where she says she first met her attacker, a young man apparently in his late teens.

Credit: KARE 11
Georgianne Dreher points to the location of the Zayre's shopping center.

“He was coming across the parking lot on a bike,” Dreher said, pointing across the street to the shopping center where the Reker girls were last seen.

“Zayre's shopping center was right over there,” she said.

It was a hot summer day. Georgianne says he was new in town, interested in making friends.

“And I asked him, ‘Do you know any good swimming spots?’ And he said, ‘Yes, the Quarry, it’s a beautiful place.’”

The Quarry.  That’s the same place the sisters' bodies would be found.

‘He pulled a knife’

Dreher says they biked off together, stopping along the way on the bank of the Sauk River.

At first, she says they shared stories about their lives. When she asked what he did, he said he was a traveling a carnival worker.

“I know him as Lloyd, the carnival worker,” she said.

As they talked, Georgianne says his mood suddenly changed.

“He reached back, and he was fiddling around with his left hand – and he pulled out a knife,” she remembered. “And that’s when I just started doing everything he said.”

As he assaulted her, she says he talked about his fantasies – including a fascination with sisters.

Dreher's nightmare did not end until a car pulled up just above them. Enough of a distraction, she says, that she was able to escape.

She even showed KARE 11’s A. J. Lagoe how she wrote about it at the time in her scrapbook.

“You wrote his name?” Lagoe asked.

“Yes, Lloyd!” she said, pointing to his name and the words she wrote: “then tried to kill me.”

Credit: KARE 11
A faded entry in her old scrapbook says Lloyd "tried to kill me."

Remember, her assault was just days before the Reker sisters disappeared.

“So, I want to make sure I have this straight,” asked Lagoe. “You met the man who assaulted you across the street from the Zayres?”

“And where you were sexually assaulted was less than three-quarters of a mile from where the sisters' bodies were found?” he asked.

Georgianne says she reported her attack to authorities back in 1974. But she says Lawrence Kritzeck, an investigator for the Stearns County Sheriff at the time, told her they didn’t think there was a connection to the Reker murders.

Her attacker was never located.

So, years later, after the arrival of the internet, she set up an alert on her computer for news stories including the name “Lloyd” and the words “carnival worker.”

Six years ago, she got a hit.

Credit: KARE 11
The Lyon sisters disappeared from a Maryland shopping mall in 1975.

It was a report that Lloyd Welch, a one-time traveling carnival worker, had been named a "person of interest" in another notorious cold case involving young girls.

The Lyon sisters – Sheila, 12, and Katherine, 10 – had disappeared from the Wheaton Plaza shopping center just outside Washington, DC, in March of 1975, less than a year after the Reker sisters were murdered.

As part of their investigation, authorities in Montgomery County, Maryland, released a 1977 mug shot of Welch to show what he looked like around the same time.

“It was mind-blowing,” Georgianne said.

“When you saw this photo did you have any doubt this was the man who sexually assaulted you?” KARE 11’s Lagoe asked.

“Absolutely not. That was the man that assaulted me,” she replied.

By 2014, when Lloyd Welch was named in connection with the Lyon sisters case, he was already a convicted sex offender and a suspect in other crimes across the country.

Georgianne reached out to the East Coast detectives investigating the case.

Two of the lead investigators from Montgomery County Maryland – Detectives Mark Janney and Katie Leggett – traveled to St. Cloud to interview her in person.

KARE 11 reviewed a recording the detectives made of their interview, as Georgianne described details about things she remembered her attacker telling her.

One of those details involved the name of a girlfriend he said was traveling with him.

“He talked a lot about Helen,” she told them. “He really loved Helen.”

“He called her Helen by name?” Detective Leggett asked.

Turns out Lloyd Welch had been crisscrossing the country with his girlfriend Helen Craver.

A host of tiny details like that convinced East Coast authorities that Georgianne had been attacked by Lloyd Welch.

They were so convinced that when Welch was ultimately charged in connection with the kidnapping and murder of the Lyon sisters, they subpoenaed Georgianne to testify as a pattern witness.

But her testimony wasn’t necessary.

“I plead guilty to felony first degree murder,” Lloyd Welch told a judge in 2017. He was sentenced to 48 years in prison as part of an agreement with prosecutors.

Even though she was going to be a witness in the Lyon sisters case, Georgianne says authorities in Stearns County still refuse to consider Lloyd Welch a serious suspect in the Reker sisters murders.

"That’s a guy that’s a serial killer. You got two girls on the East Coast, two girls out here. And he’s got a fantasy about sisters!” she said.

She has written to Welch in prison and even visited him once, hoping to get a confession that still hasn’t come.

“I want answers,” she said.

Wes Nance, prosecutor in the Lyon sisters murder case, said investigators spoke to Welch about the letters Georgianne had written to him. He said Welch acknowledged that “she said some things about him that were accurate that few people would know.”

Even so, Stearns County Sheriff’s investigators have not interviewed Welch about the Reker murders. They say some of Georgianne’s physical descriptions of her attacker don’t match Welch.

In an email dated August 1, 2020, an investigator told her “The investigation of the Reker homicides points in a different direction than Mr. Welch.”

Authorities continue to ask for the public’s help in solving the case.

Anyone having information is asked to email their tip to sheriffinfo@co.stearns.mn.us or call the department at 320-259-3701.

If you have something you think KARE 11 should investigate, email us at: investigations@kare11,com