When a jail inmate dies in Minnesota, counties typically investigate themselves and find they did nothing wrong, despite evidence to the contrary. 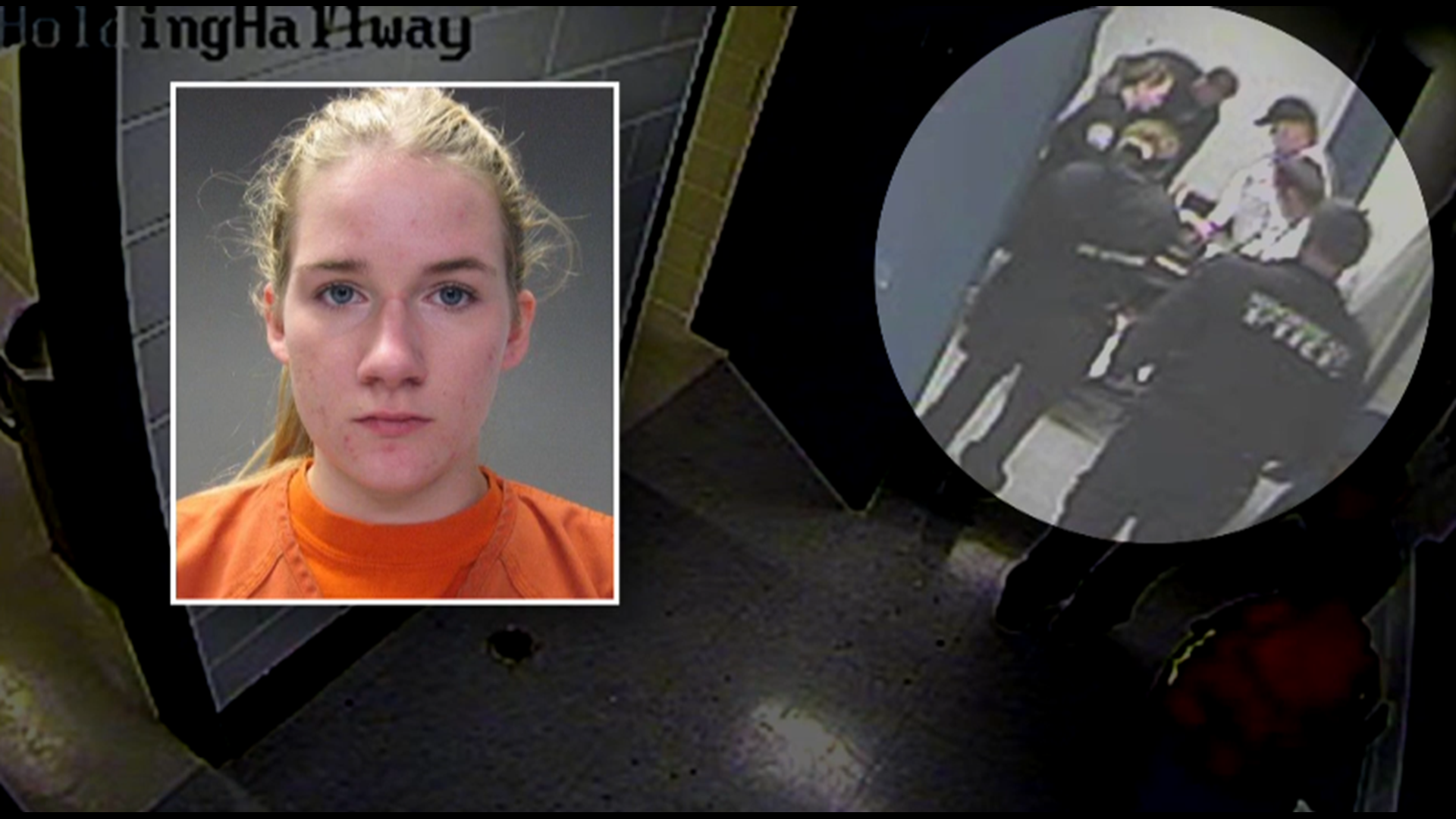 MOORHEAD, Minn. — “Don’t leave me in here,” 19-year-old Abby Rudolph told her mother from the Clay County jail two days before she died.

“They made me be alone in a locked room with puke all over me,” she said.

The teenager had been arrested for suspected shoplifting. Jail video showed her vomiting repeatedly – suffering from drug withdrawal that went untreated, records show.

“She just became progressively sicker and sicker and sicker, and nobody did anything about it,” said Colin Peterson, an attorney hired by Abby’s family to sue Clay County and its jail medical provider for neglect.

When the Hennepin County Sheriff’s Department took Naajikhan Powell into custody last year, they were warned he presented some risk of suicide.

“He’s a moderate suicide risk,” one of his jailers was heard saying on video.

And yet, just hours after being booked, he was left alone and found hanging in his cell. No suicide safeguards were in place, records show.

His family and friends have demanded accountability, saying there needed to be a thorough investigation into what went wrong.

“Everybody involved needs to be held accountable for what happened to my son,” his mother, Tybetha Prosper, said at a vigil in November.

In those two cases – and others – however, a KARE 11 investigation finds that the agencies responsible for keeping inmates alive, investigated themselves – and overlooked serious problems.

In Minnesota, there’s no requirement that counties use an independent, outside investigator after an inmate dies in custody.

That is the opposite of what happens when someone dies in an officer-involved shooting. In those cases, the state Bureau of Criminal Apprehension is brought in to investigate.

Groups like the International Red Cross say when an inmate dies in custody, investigations should “be independent and impartial.”

“They must have no relationship – institutional or hierarchical – with persons or agencies whose conduct has to be investigated,” its guidelines state.

In 2015, a Presidential Task Force recommended outside investigations for inmate deaths be adopted nationwide, saying: “in order to restore and maintain trust, this independence is crucial."

Credit: KARE 11
Professor Michele Deitch says jail official should not investigate deaths in their own facilities.

“Any investigation of a death in custody needs to be done by an entity outside of the agency that might bear some responsibility for that death,” said Michele Deitch, a University of Texas professor and nationally recognized expert on jails, who helped craft the state’s law.

“No one should be investigating a death that occurred in their own jail,” she said. “Even if it’s done with the best of intentions, the agency has a conflict of interest.”

“There should always be an independent investigation when there’s a death in custody,” said Georgia State Representative David Wilkerson.

His charge?  Failing to complete earlier treatment for mental illness.

Credit: KARE 11
Naaj Powell was not placed on suicide watch even though he was arrested at a psychiatric unit.

The county investigated itself – and despite clear signs that red flags were missed, concluded there was no wrongdoing.

A review of Hennepin County’s investigation shows that instead of focusing on the jail’s failure to protect Powell, a deputy told a judge in a search warrant application they were criminally investigating assisted suicide by HCMC doctors.

But records show the deputy had no evidence to suspect that his death was assisted by HCMC before getting the search warrant. The case was closed with no findings of wrongdoing.

A wrongful death lawsuit filed by Powell’s family accuses the Hennepin County Sheriff’s Department of trying to “pass the buck for Powell’s suicide” by pointing the finger at HCMC employees in the search warrant application.

“We need to have independent investigations. What we do not need is the Hennepin County Sheriff’s office investigating its own employees,” said Jeff Storms, one of the attorneys representing Powell’s family.

“They’re not working to fix problems, they’re looking to cover their backside,” he added.

The lawsuit points to Powell’s history of suicide attempts and recent suicidal thoughts and threats and says the jail “housed him in a cell with a bunk bed, with an easy anchor point, a sheet to use as a ligature, and no one anywhere near Powell to call for help.”

“They gave him the means and opportunity to hang himself. They might as well have given him a loaded gun,” Storms said.

In a written statement, Hennepin County said it could not comment on pending litigation.

Though the Department of Correction review of the Powell’s case found no violations that contributed to his death, former DOC jail inspector Greg Croucher told KARE 11 last year that reviews done by the state agency are not independent investigations.

Croucher said during his 13 years at DOC he would review video to determine if inmates were checked on according to state rules and look to see if training for guards was up to date. He said reviews were limited to possible state rule violations.

He said state inspectors did not interview witnesses or seek to determine whether jail medical care was adequate.

That may help explain the DOC’s findings in its review of 19-year-old Abby Rudolph’s death in the Clay County jail in November 2016.

The County investigated itself and found that jail staff “acted appropriately” and “showed compassion while dealing with inmate Abby Rudolph.”

The DOC parroted the county’s findings in its report, stating “staff appear to have been very compassionate and treated Ms. Rudolph very professionally.”

But KARE 11’s investigation of the case found that the care for Rudolph was anything but compassionate. The teen had been arrested for shoplifting and then spent days going through severe opioid withdrawal before she ultimately vomited to death.

The jail medical staff failed to provide any withdrawal medication and guards consistently documented her as “OK,” even as she lay on her cell floor vomiting. and soiling herself, video and records showed.

Inmate deaths from withdrawals should almost never happen, said Dr. Kevin Fiscella, an addiction specialist who sits on the board of the National Commission on Correctional Health Care.

“It is a needless event. It is a preventable event,” Fiscella said.

The family settled with MEnD for an undisclosed amount in May 2019, then settled with Clay County in February for $150,000.

“She was begging, begging for help and there was no compassion given to her. There was no respect for her basic human needs and what happened was wrong,” said Colin Peterson, an attorney who represented the family in the federal lawsuit.

“We simply have to do better,” said DOC Commissioner Paul Schnell.

DOC is backing significant jail reform proposals introduced at the state legislature last month that would require counties to provide better protection and care for inmates.

Propelled by emotional testimony from family members who have lost loved ones at Minnesota jails, the reform bill was approved by a unanimous bipartisan vote in a key Minnesota House committee.

The DOC wants more authority to investigate jails and take swifter action should problems be found, including the ability to more quickly suspend and revoke a license.  Another provision calls for an outside medical doctor to review deaths to determine if mistakes or denial of medical care played a role.

As written, however, the proposal stops short of requiring an outside agency to  investigate deaths rather than the sheriff’s department that operates the jail.

In an email to KARE 11, the Minnesota Department of Corrections said it encourages Sheriffs to use an outside agency to investigate jail deaths – but state law does not require it. Each Sheriff can choose who does it.

More often than not they choose themselves.

This leaves families calling for accountability and transparency on the outside of a closed system looking in.

“There needs to be policy change all across the board, because my son is no longer here,” said Powell’s mother.

If you have a tip you think we should investigate, email our team us at: investigations@kare11.com